US, WASHINGTON (ORDO NEWS) — While Britain prefers to discuss eggs in Scotch, Russia is aiming to “take over” the Arctic with financial support from China. The author of the Spectator is depressed that, against this background, the United States is sluggishly reacting to how 22 percent of the world’s oil and gas reserves are being taken out from under their noses, and Europe sees a nature reserve with polar bears in the region.

Perhaps it’s time for Santa Claus to look for a new home before the Russians kick him out. “This is our Arctic,” proclaimed Artur Chilingarov as he traveled to the North Pole in 2003. Four years later, another Russian expedition, also led by Chilingarov, planted a titanium flag of Russia at a depth of 4,300 meters below the North Pole. This became a symbolic manifestation of geopolitical ambitions. The chauvinistic Chilingarov said: “Our task is to remind the whole world that Russia is a great polar and scientific research power.”

Since 2013, Russia has invested heavily in seven military and naval bases along its Arctic coast to bolster its influence and capabilities. “The Americans think that only they can dictate the rules,” said Russian Foreign Minister Sergei Lavrov. “As for the Northern Sea Route, this is our national transport artery.”

The Western press did not write much about this, but in November in St. Petersburg, President Vladimir Putin took part in the ceremony of raising the national flag on the new diesel-electric icebreaker Viktor Chernomyrdin, the most powerful non-nuclear icebreaker of this type in the world. A month earlier, another new Russian icebreaker set off on its maiden voyage – the nuclear-powered icebreaker Arktika weighing 33,000 tons and a displacement comparable to that of an aircraft carrier during the Second World War. This icebreaker can break 3 meters thick ice.

In the future, Russia plans to add three Leader-class icebreakers weighing 70,000 tons to its icebreaking fleet, which currently includes 37 icebreakers. This force provides support to the Northern Fleet, which is based near Murmansk in the Barents Sea and is composed of 35 impressive surface ships and an equal number of submarines. 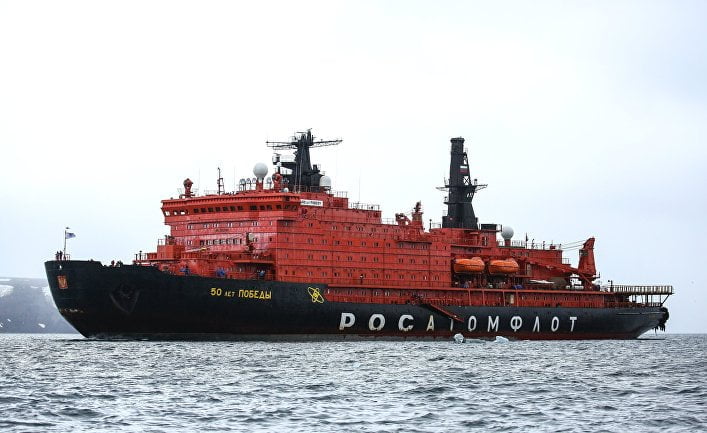 The Russian Arctic, with a coastline of 24 thousand kilometers and home to about 2 million people, until recently was of dubious value. But global warming has changed everything. According to a 2014 report by the Intergovernmental Council on Climate Change, Arctic ice has shrunk by 75 percent since 1980, and vast swathes of the Arctic Ocean could be completely ice-free within the next 10 years. If we talk about the countries of North Asia, the sea route running through the Russian Arctic will reduce the time for transporting goods to Europe by several weeks.

More importantly, according to some estimates, under the waters of the Arctic Ocean, which occupies 3 percent of the Earth’s surface, that is, about the same as Russia, – hidden 22 percent of the world’s oil and gas reserves, as well as rich mineral deposits. Although the international community continues to talk about the dangers of global warming, many countries are ready to put the development of the Arctic Ocean above environmental interests.

And the distribution of rights to develop this ocean is a very topical issue. Although the UN Convention on International Law of the Sea allows the coastal countries – members of the Arctic Council – Canada, Denmark (via Greenland), Norway, Russia, and the United States – to consider a strip 320 kilometers wide from the coastline as their territorial waters, everything beyond it, becomes the subject of heated debate – and it’s not just about borders. If the country is able to prove the existence of a “continental submarine” – shallow water connected to the mainland – then the width of its exclusive economic zone could be increased to 560 kilometers.

Russia, Canada and Denmark declare their claims to the Lomonosov Ridge – an underwater ridge of the continental crust with a length of 1,800 kilometers, which divides the Arctic into two parts.

Another subject of controversy was the “right of way”. The UN Convention on International Law of the Sea grants all countries the right to use territorial waters for passage, but this does not apply to the internal waters of states. At present, Russia considers the Northern Sea Route its internal waters and charges a corresponding fee. According to its own interpretation of this convention, Russia can block access to this route at any time. 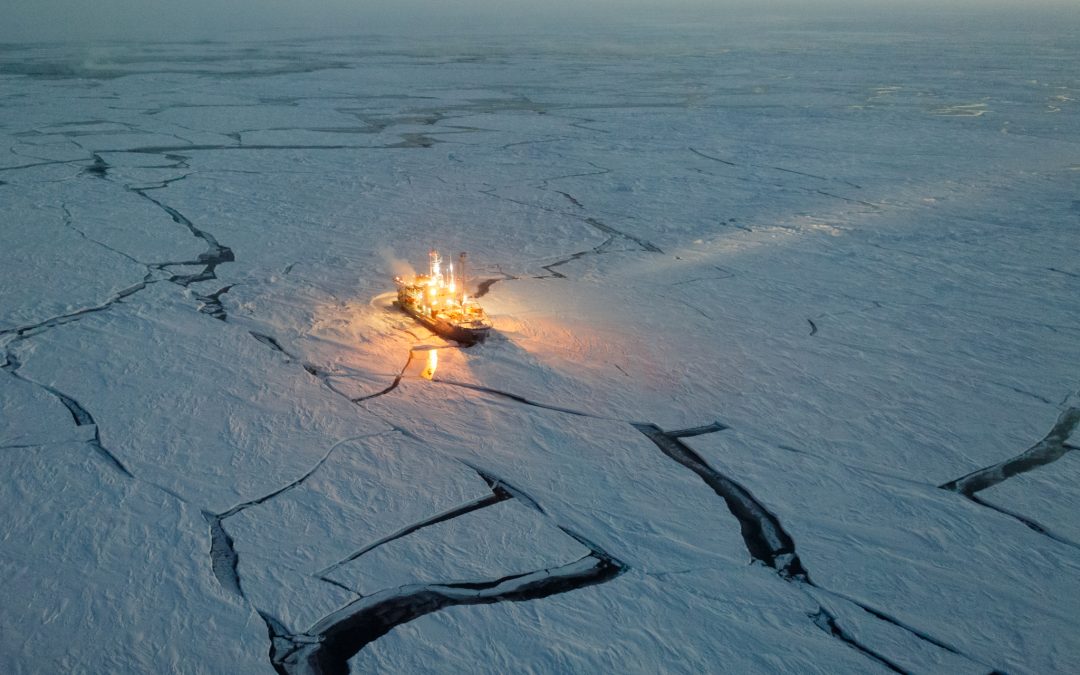 So far, America’s response to Russia’s claims has been rather sluggish. Only in 2018, after a 30-year lull, the United States decided to send its surface ships to the Arctic, led by the aircraft carrier Harry Truman. However, America’s resources in this region are extremely scarce. Although last year the US Congress approved a $ 655 million icebreaker, the US Coast Guard currently has only one heavy icebreaker, the 43-year-old Polar Star.

Meanwhile, US Secretary of State Mike Pompeo is well aware of the economic potential of the Arctic, which he vividly demonstrated during his visit to Finland in May 2019. However, with the election of Joe Biden as president of the United States, Trump and Pompeo’s attempts to restore American economic interests and military power in the Arctic are likely to quickly fade away. Despite the proposals of Presidents Bush and Obama, the US Congress refused to ratify the UN Convention on the Law of the Sea, so the United States is currently unable to expand its exclusive economic zone – at least in accordance with international law. In any event, America’s economic benefits would be controversial.

In December 2016, outgoing President Obama and Canadian Prime Minister Justin Trudeau drew up an agreement that would permanently ban drilling in Alaska. The goal was to undermine the presidency of Donald Trump, who actively supported oil companies. In March 2019, a federal court ruled that Trump’s attempt to overturn Obama’s ban was illegal. As with Obama, Biden’s strategy for the Arctic is likely to be characterized by vague terms such as “environmentally friendly” and “responsible” – in short, there will be no strategy. It seems likely that Biden could give up the fight for the Arctic altogether as easily as Obama once gave up control of the South China Sea.

As for Europe, it is participating in this game thanks to Denmark’s sovereign rights to Greenland. Although Denmark has increased its maritime budget, it is still a drop in the Arctic Ocean compared to how much Russia is spending. With Denmark spending only 1.3 percent of its GDP on defense without meeting its NATO commitments, Prime Minister Mette Frederiksen’s harsh response to Trump’s offer to buy Greenland was recklessly brave. Trump quickly canceled his scheduled visit to Denmark. It is now unclear what major power Frederiksen will be able to rely on if Russia begins to challenge Danish rights in the Arctic. It will definitely not be the European Union.

Unlike India and China, the EU cannot even get an observer seat in the Arctic Council, because Canada vetoed its application due to the European embargo on seal skins. 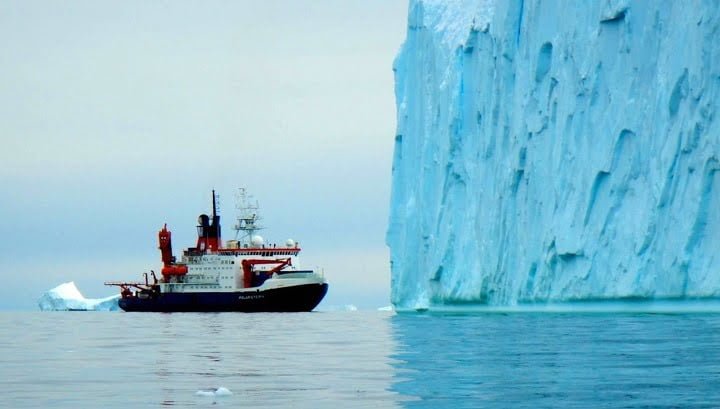 Fortunately, you might think, China is not an Arctic country. Or is it? In 2018, China put forward its postmodern claim to the status of a “near-Arctic” country – despite the fact that it is separated from the Arctic by 1,500 kilometers. As one of the first countries to sign the Treaty of Svalbard in 1925, China claims to have the same rights as Norway to develop resources in the Norwegian-controlled Svalbard archipelago. In addition, China claims that the UN Convention on the Law of the Sea, which it has ratified, gives it rights to the Arctic direction of the Belt and Road Initiative. Chinese investment in Greenland today accounts for 12 percent of its GDP.

China is pursuing approximately the same policy with regard to Finland and Iceland. China denies expansionist intentions but in 2010, Chinese Rear Admiral Yin Zhuo said, “The Arctic belongs to all the peoples of the world, and no nation has sovereignty over it. China must play an integral role in the development of the Arctic, because our country is home to one fifth of the world’s population.”

Is Russia worried? Probably yes. However, its efforts to control the Arctic are heavily dependent on Chinese funding. Need compels. The probable future was determined when the Silk Road Fund and China National Petroleum Corporation received a 30 percent stake in Yamal LNG, one of the world’s largest natural gas projects. Perhaps Europe sees in the Arctic some kind of reserve with polar bears, but the larger players disagree with it.

In the United Kingdom, meanwhile, the government appears to be more interested in discussing eggs in Scotch and how to prevent people from playing board games on Christmas, rather than measures to prevent Russia from taking over the Arctic.

The BBC’s lack of interest in geopolitical issues is no less frightening. Although the channel has 2,000 journalists and 41 bureaus around the world, it never mentioned the launch of new Russian icebreakers. Meanwhile, two months ago, the BBC posted a cute photo of 18-year-old Greta Thunberg, posing with a poster on an iceberg. Obviously, for Beeb, the Arctic is a purely ecological story, although I personally think that on holidays, Santa Claus and the North Pole should probably wait for guests.