(ORDO NEWS) — It’s all very well saying the Universe encompasses everything, but everything has to end somewhere, right? Well, not exactly.

But people often ask the question in a slightly different way, which assumes there is an edge: “If the Universe is expanding,” they say, “what is it expanding into?”

This, though, misunderstands what is meant by ‘expanding Universe’.

In Berlin in 1915, at the height of World War One, Albert Einstein came up with a revolutionary theory of gravity, which supplanted Newton’s and, in 1916, he applied it to be the biggest source of gravitating mass he knew of: the Universe.

What Einstein’s theory showed (it was others who spotted this, not Einstein) was that the Universe could not be still but had to be in motion: either expanding or contracting.

In fact, in 1929, the American astronomer Edwin Hubble discovered that galaxies are flying away from each other like pieces of cosmic shrapnel in the aftermath of a titanic explosion – the Big Bang. This, in essence, is what we mean by the expansion of the Universe: that the distance between galaxies is growing. Einstein’s theory could easily describe a Universe that goes on forever and therefore has no edge, or one that curves back on itself like a higher-dimensional version of the surface of a ball, and so also has no edge.

In the latter case, confirmation would be to observe the same galaxies on opposite sides of the Universe when we look far enough away with our telescopes.

Those galaxies exist in a sphere of space centred on the Earth that we call the ‘observable Universe’. It’s actually about 92 billion light-years across as the Universe ‘inflated’ far faster than the speed of light in its first split-second of existence.

The observable Universe is bounded by a ‘cosmic horizon’, much like the horizon at sea. Just as we know there’s more ocean over the horizon, we know there are more galaxies (possibly an infinite number) beyond the cosmic horizon. Their light simply hasn’t had time to reach us yet. 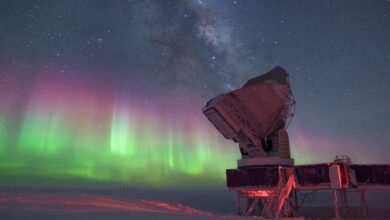