(ORDO NEWS) — The discovery of fast radio bursts was completely unexpected. For a decade and a half, scientists have been arguing about the nature of these mysterious cosmic flares. Recently, astronomers have put forward a new intriguing version. In their opinion, the matter is in the planets dying in the arms of neutron stars.

Fast radio bursts (FRBs) are cosmic flares observed with radio telescopes. Such a flash shines on a par with the strongest radio sources in the sky, but lasts only a few milliseconds.

The world met them in 2007. Processing data from the Australian Parkes radio telescope for 2001, scientists discovered the first of these outbreaks. Today, the number of open FRBs is already in the hundreds, and one can only guess how many events do not fall into the field of view of radio telescopes.

Many astronomers reacted to the discovery with disbelief. Very short, very bright and unpredictable flashes in random areas of the sky looked extremely similar to terrestrial interference.

Let’s explain. A celestial body can be the most powerful source of radio waves, but they have to overcome cosmic distances. So the signal reaches the Earth incredibly attenuated.

The unit of flux density (roughly speaking, brightness) accepted in astronomy is the yang. It is named after radio astronomy pioneer Karl Jansky. One yang is equal to 10 −26 watts per square meter in hertz.

A 10 yang cosmic radio source is considered to be very strong. But it is easy to calculate that in a frequency band of, say, 100 kilohertz, the radiation from this “bright” source has a ridiculous power of 10 −19 (one ten-quintillion) watt per square meter of antenna. For comparison: a portable radio transmitter has a power of several watts!

With the tiny power of cosmic radio waves falling per square meter, a larger antenna is needed. That is why radio telescopes are so impressive. But this does not solve the problem of terrestrial interference, which turns out to be much brighter than cosmic radio sources.

To protect themselves from them, observers work with frequencies on which there is no broadcast. However, the source of the terrestrial radio signal can be, for example, a banal lightning.

Or the operation of some device that was not at all conceived as a radio station. So when a radio astronomer sees short, irregular, and bright flashes (namely, those are FRBs), an alarm lamp lights up in his brain.

To some extent, this skepticism was justified. Along with fast radio bursts, the same Parkes radio telescope also registered other bursts very similar to them – the so-called peritons.

But unlike FRBs, which were eventually discovered by other instruments , only Parks saw perytons, and only from one direction. There are also more subtle differences between perytons and fast radio bursts, which we will not go into.

Researchers quickly came to the conclusion that perytons are born on Earth. Their exact origin remained a mystery for some time. The answer turned out to be truly anecdotal. The flares came from… the microwave in the Parkes staff break room.

The door of the microwave does not let radiation out. That’s just astronomers used to open it before the end of the heating of food.

In such cases, automation almost instantly turns off the emitter. But for a fraction of a second, the device turns into a source of short radio waves. They were fixed by an honest radio telescope, which did not expect such a “trickery” from its staff.

Having laughed, the observers were convinced that their microwave oven could only cause perytons, but not FRBs. This was an important, but, of course, not the only argument for the fact that fast radio bursts still come from the expanses of the Universe.

Under the pressure of the accumulated facts, even the most corrosive skeptics removed suspicion from mysterious outbreaks. There remained “nothing at all”: to find out their true origin.

Go there, I already know where

As is usually the case in science, the path to truth consisted of many small steps.

Even the discoverers of fast radio bursts measured their dispersion. Everyone is familiar with the dispersion of light: a white beam, passed through a glass prism, breaks up into a whole rainbow.

Radio waves are also electromagnetic waves, and they are also subject to dispersion. True, not in a prism, but in interstellar and intergalactic gas.

It is very rarefied, so for arrogant earth engineers it is simply a vacuum. But just as a drop sharpens a stone, so the light-years of “almost empty” space make the radio wave feel this very “almost” on its own skin.

Knowing the typical concentration of matter in the Universe and measuring the dispersion of a radio wave, it is possible to determine the distance traveled by it. The accuracy of such a measurement is terrible, but it is possible to distinguish parsecs from kiloparsecs.

And observations of numerous radio bursts have shown that they come far from beyond the Milky Way. In 2016, scientists first identified the FRB’s host galaxy. The radio waves born there reached the Earth for about 5 billion years. Subsequently, star systems “native” to radio bursts were determined several more times.

It cannot be said that this greatly clarifies the nature of the flares. In any self-respecting galaxy, there is a whole zoo of various objects, from banal stars to a supermassive black hole. And what of all this is “splashing” on the radio? 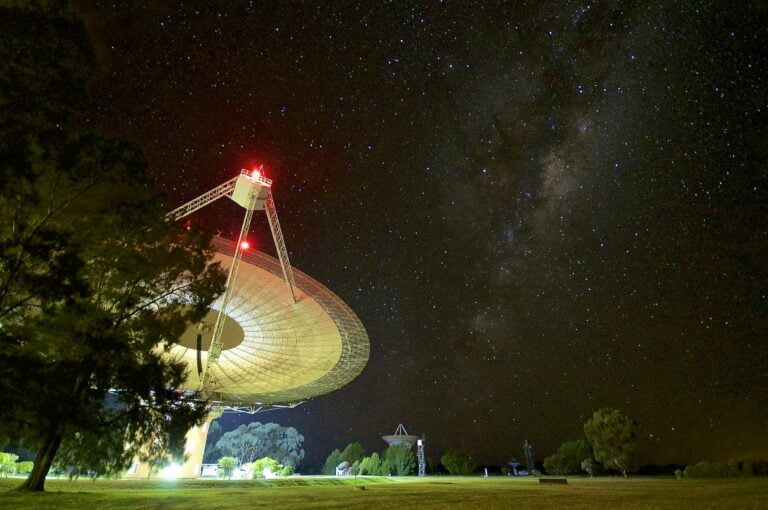 And yet, “geolocation” proved to be useful. Knowing the distance to the source and the power of the received signal, astronomers calculated the energy of the flare. It is estimated at 1038–1046 erg.

The spread is quite large: the Sun generates the first energy in a day, and the second in hundreds of thousands of years.

Both values ​​are impressive, given that the radio burst lasts only a few milliseconds. However, in the universe there are explosions and more abruptly. For example, a typical supernova releases about 10 50 -10 51 erg of energy.

The conclusion suggests itself that the fast radio burst is associated with a brief and violent cosmic catastrophe. In the universe every now and then something goes booming. Supernovae erupt, stars collide with each other or are torn apart by black holes. But astronomers lacked the data to correlate radio bursts with a specific type of cosmic catastrophe.

The riddle excited the imagination of theorists. A tempting hypothesis has been put forward that FRBs are generated by explosions of primordial black holes. Yes, yes, do not be surprised: black holes can theoretically explode.

More precisely, they “evaporate” due to Hawking radiation. The smaller the mass of the black hole, the more powerful this radiation.

And the more powerful the radiation, the more mass of the black hole it takes with it. Therefore, “evaporation” accelerates itself, and its final stage looks like an explosion. So, at least, says the theory.

In practice, the lightest known black holes have a mass of several suns. They evaporate so slowly that we have no chance of waiting for the final fireworks. Another thing is the primordial black holes that formed immediately after the Big Bang.

They can weigh as much as an asteroid, and even as a speck of dust. Theoretically, a whole bunch of primordial black holes are exploding in the universe right now.

But we have not yet seen a single black hole that can be confidently identified as primary. And not a single event that unambiguously is its explosion. Maybe fast radio bursts are just “it”?

Some researchers have put forward more daring ideas about mysterious outbreaks. For example, that it is not black holes that explode, but hypothetical bosonic stars , consisting of dark matter.

However, the Universe gave scientists a cold shower. It turned out that fast radio bursts can be repeated .

Fast radio bursts are named after the date they were first observed. For example, the event FRB 121102 occurred, as it is easy to understand, on November 2, 2012. If later a radio burst was recorded again at the same point in the sky, it is considered that this is a repetition of FRB 121102, and not a new event. Thus, radio bursts are divided into repetitive and non-repeating.

Repeating radio bursts count by tens , and the repetitions themselves by hundreds. Repeating bursts are rarely truly periodic, although some mathematical patterns can be found .

An event that repeatedly occurs in the same point in the sky cannot in any way be an explosion of a celestial body. It’s very hard to imagine a star or a black hole that explodes and then…explodes again. And so hundreds of times.

But repetitive radio bursts perfectly fit into another theory. It says that the source of FRB is magnetars. These are neutron stars with magnetic fields of 10 13 -10 14 gauss. Such values, incredible even by the standards of neutron stars, make magnetars the strongest magnets in the known universe.

Some magnetars have repeatedly demonstrated radio flares, however, not up to real fast radio bursts. In addition, some radio bursts clearly passed through a very powerful magnetic field.

Astronomers have come to this conclusion by measuring a subtle characteristic of radio waves. For sophisticated readers, let’s clarify: this was a measure of the rotation of the plane of polarization in a magnetic field.

And once the observers still waited for the real FRB from the magnetars. It was FRB 200428, the only (so far) burst that has occurred in the Milky Way.

The dispersion of the signal unambiguously indicated that the event took place in the Galaxy, and not outside it. And it had to happen that it was at this point in the sky that the magnetar SGR 1935 + 2154 was located. Subsequently, it turned out that FRB 200428 is a repeating radio burst.

How exactly a magnetar generates radio bursts is a completely different question. There are plenty of theories about this, and the “planetary” hypothesis with which we started the conversation is just another of them. To make a choice between different versions, there is not enough data yet.

Or maybe we still bang?

So, magnetars put a fat cross on talking about explosions of all sorts of interesting gizmos?

Not really. It is possible that repeating and non-repeating bursts are of different nature. In the end, the vast majority of FRBs never recurred.

Astronomers are no strangers to flares that look like sisters but have different origins. Let’s take a look at supernovae, for example.

A Type Ia supernova is a thermonuclear explosion of a white dwarf. In fact, white dwarfs are the remains of small stars that have run out of fuel. They usually cool down slowly and boringly. But sometimes a white dwarf builds up mass.

Either gradually, absorbing matter from a nearby star, or abruptly, colliding and merging with another white dwarf. If the mass of a white dwarf becomes too large, a thermonuclear explosion occurs, blowing the greedy to dust.

Supernovae of all other types have a completely different origin. Such an outburst occurs when a massive star runs out of fusion fuel.

At the same time, its core contracts, turning into a neutron star or a black hole. The outer layers fall on the core and bounce off it. The enormous energy of this impact turns the rebounded shell into a hot expanding front, similar to a blast wave.

This is just one example of a number of completely different phenomena that look very similar through a telescope. It is possible that behind fast radio bursts there are events of a different nature, including explosions of something like that. 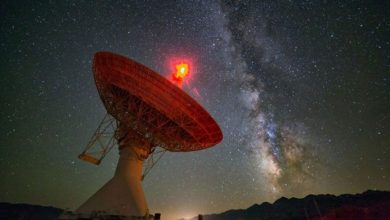