(ORDO NEWS) — The eerie mummy from the published footage has been kept in Japanese temples for hundreds of years and has been an object of worship. The upper part of her body is like that of a man, the lower part is like that of a fish.

According to legend, a creature about thirty centimeters in size was caught in a fishing net on the coast of the province of Tosa.

This happened around 1740. And only recently the priest of the temple in which the mummy was kept agreed to give it to scientists for a detailed study.

What conclusion did the experts come to? And where did the myths about mermaids come from in the folklore of various countries?

Japanese scientists have uncovered the secret of the mermaid from Okayama. The 300-year-old mummy of a mysterious creature turned out to be … a skillful fake.

To create a “mermaid” used the torso of a monkey, a fish tail and human nails. To study the composition of the mummy in more detail, scientists examined its DNA.

In Japan, mermaids are called “ninge”. In local mythology, this is a creature with a human face, a monkey mouth and a fish tail covered with golden scales. According to legend, ninge can bestow longevity. It is enough to eat at least one golden flake.

Because of the popularity of such legends, craftsmen create mummies that look like magical creatures. Some even try to pass them off as real mermaids.

“The simplest fake is to take the top from the monkey, the bottom from the fish, skillfully sew it all, and, in fact, put it somewhere.

You can make a frame, you can make something out of papier-mache and stick there, I don’t know fish. Different options, different craftsmen, but the goal, in fact, is the same – to get fame, money. 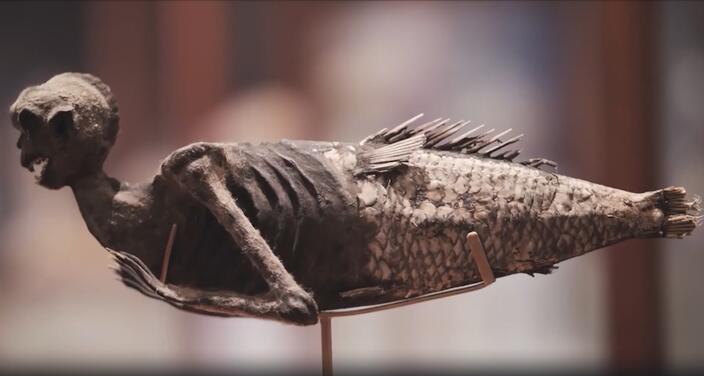 Another unusual exhibit is from the National Museum of Denmark. Guides say that the skeleton of the so-called Harald mermaid was accidentally discovered by a local farmer while plowing a field.

During life, the sea maiden allegedly had long thick hair, and in her hand she held a purse with a shark tooth, a shell and a flower.

But this is just a legend. In fact, the skeleton of the Harald mermaid was created by the Danish artist Mille Rude.

“She, inspired by the image, in fact, of the Danish little mermaid, who sits there on a bronze stone, made a similar image.

Then, in addition, she was also inspired by a mummy that was found in the middle of the 19th century. In general, she made an ordinary work of art. 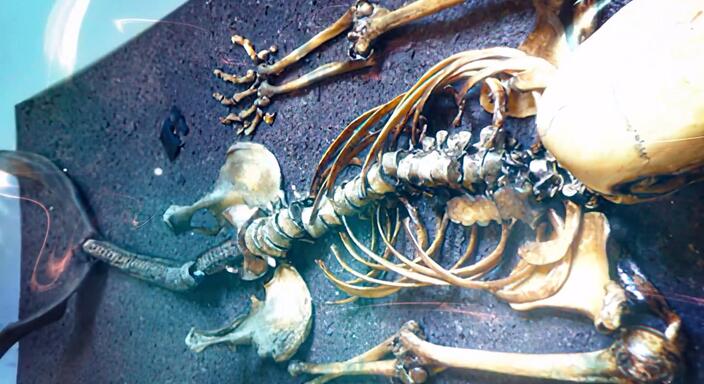 The mermaid is one of the most famous and ancient mythical characters. It is believed that the first legend of a woman with a fish tail appeared more than four thousand years ago in ancient Assyria.

There, from generation to generation, the story of the moon goddess Atargatis was passed down, who turned into a mermaid, throwing herself into the water due to the death of her lover.

Later, such myths became popular among different peoples of the world. In Scandinavia, sea maidens were called undines. Sirens in Ancient Greece.

Moreover, initially the ancient Greek sirens were depicted in the form of birds with female heads. But later poets began to describe them as girls with fish tails, who are waiting for sailors on rocky cliffs.

Mermaid legends were also popular in the Middle Ages.

The Europeans believed that the mythical sea maidens had no soul. To find it, the mermaid had to sacrifice the most precious thing in her life – the sea. And then – go to land.

“And one of the legends, also medieval, says that a mermaid came to a monk, and he prayed with her so that she would have a soul.

She came to him several times, but in the end, the power of the sea turned out to be very strong, and she sailed away. 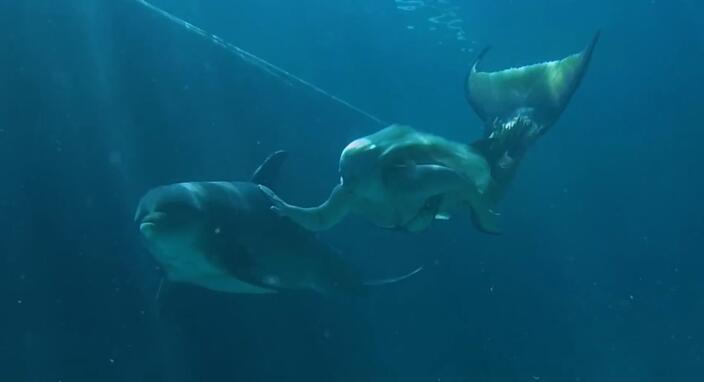 But the Slavs believed that mermaids live on land. And outwardly they are not much different from ordinary girls.

It was believed that mermaids seduce young men and drown them in water. They can also throw stones at travelers or tickle them to death.

According to popular belief, drowned girls turned into mermaids. All winter they allegedly hid at the bottom of reservoirs. And with the onset of heat, they left the afterlife to avenge their death.

“Mermaids went ashore, that is, they were not in the water, they went ashore, and moreover, they were very close to human habitation. And therefore at that time it was better not to go deep into the forest anywhere, not to swim. 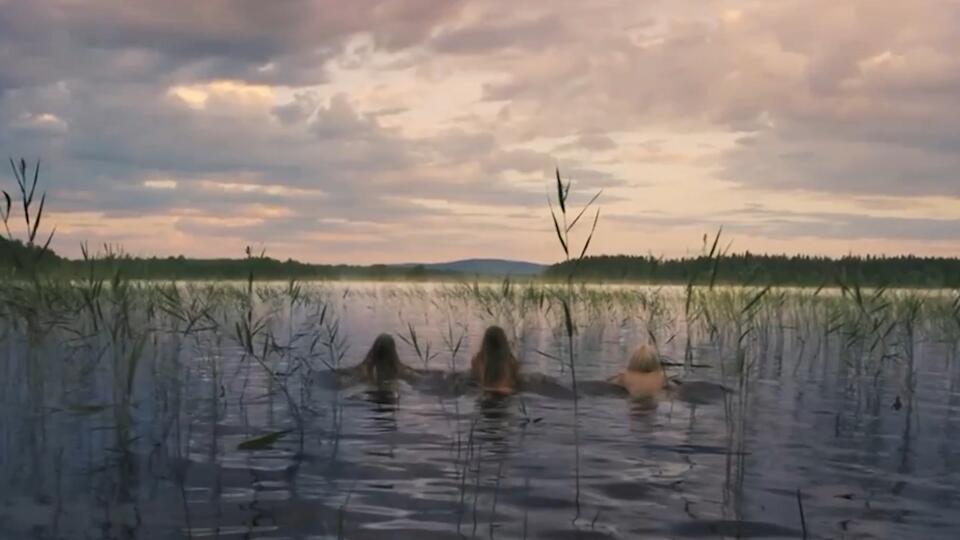 But where did the image of a girl with a fish tail come from in the folklore of different peoples? According to scientists, the mythical mermaids had real prototypes. These are manatees, dugongs and sea cows.

“Manatees that were found in real waters, they could be mistaken for some kind of fantastic creatures, because their part of the body, which is closer to the tail, it is quite fishy.

But such a rounded, serious head – it is, in general, something it resembles, of course, mammals that do not live in water at all.

Nowadays, few people believe in the legends of the sea maidens. But the image of a woman with a fish tail is still popular. 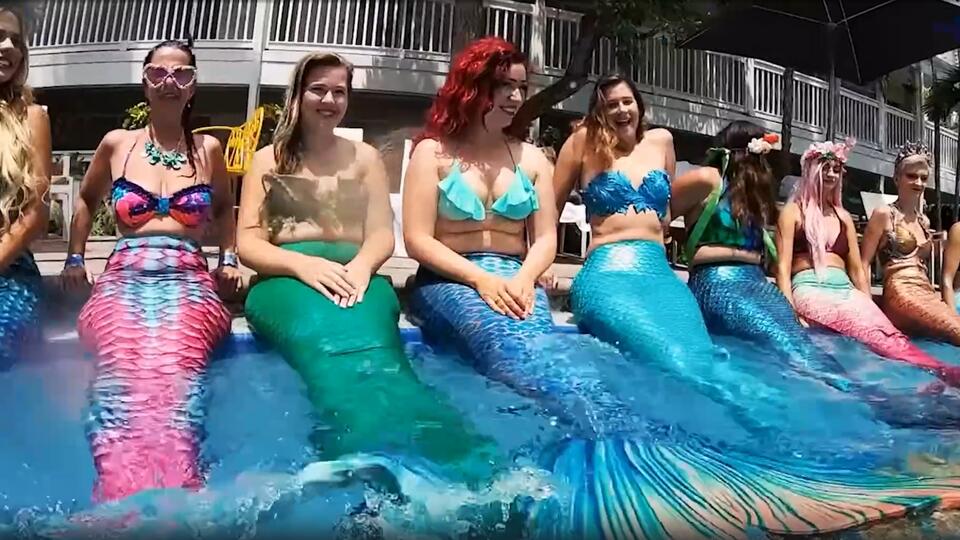 Published fascinating footage filmed on the Chinese island of Hainan. One hundred and ten freedivers dressed as mermaids simultaneously dived into a giant fish tank.

Under water, they performed dozens of complex figures, while not using scuba gear and masks. The performance was included in the Guinness Book of Records as “the largest mermaid show”.