(ORDO NEWS) — At the bottom of the Arctic Ocean, under the thickness of the ice lies liquid and solid methane. A slight increase in ocean temperature may be enough for the ice to melt and the gas to escape.

Experts explore this area every year, and every year they are afraid to find a crater on top of one of the underwater hills.

Scientists have reasons to believe that craters will one day appear: next to the hills under the cold waters of the Arctic – such geological formations were found not far from here; it is assumed that they were formed during the previous ice melt 12 thousand years ago.

Under a layer of ice here is liquefied natural gas and its semi-solid submolecular compound with water – methane hydrate.

Technically, hills are not hills at all, but heaving mounds, special forms of permafrost relief that form with an uneven distribution of temperatures and pressure where there is no heat for years.

Previously, such formations were found only on land, in the permafrost zone. Using a mathematical model of the ocean floor with ice covering it, scientists came to the conclusion that the gas in the mounds came here from the underlying rocks rich in hydrocarbons. The simulation results are published in the journal Science.

When the ice crust will break and the methane will dissolve in the surrounding waters is impossible to predict, but scientists believe that this can happen at any time as a result of even a slight increase in water temperature.

Methane is separated from liquid water by about 20 meters of ice and the pressure of 390 meters of ocean above them.

When methane escapes from the mounds, craters will remain in their place. Estimating the amount of gas that will be released when the ice melts is still difficult. 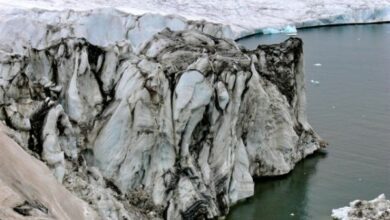