(ORDO NEWS) — An amateur astronomer has edited an unusual video about what our firmament would look like, provided that instead of the Moon, all the planets of the solar system are in the sky.

If in the morning you find the colossal silhouette of Jupiter in the dawn sky, then the end of the world has come. Fortunately, you can enjoy this magnificent spectacle without putting your life in danger.

To do this, Nicholas Holmes, an amateur astronomer, posted on his YouTube channel Yeti Dynamics a spectacular and very unusual video that shows the view of the planets at a distance from the Moon.

What would other planets look like at a distance from the moon?

In 2013, a work went viral in which he demonstrated what the planets of the solar system would look like in the place of the moon if they revolved around our planet. In an interview with Business Insider, the author himself admitted that his main task was not popularity, but the satisfaction of his own curiosity.

How did he do it? Everything is extremely simple: the video of the real sky in Huntsville, Alabama was taken as the basis, and the replacement of the Moon with other celestial bodies was made using 3D modeling programs. This helped the enthusiast to see what the planets would look like in the place of the Moon.

James O’Donoghue, a planetary scientist working for the Japanese space agency JAXA, confirmed that the sizes of the planets in the video are comparable to reality.

If you look closely, you can see even the four largest moons of Jupiter: Io, Europa, Ganymede and Callisto. And when Saturn takes its place, the moon Tethys swims past the rings. But what planets at the distance of the Moon did the creator of the video try on?

Astronomers have found the coldest place in the solar system

Astronomers have found the coldest place in the solar system 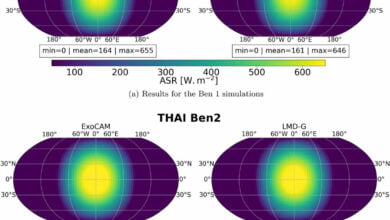