(ORDO NEWS) — Antibodies to coronavirus in the blood of COVID-19 survivors are believed to protect against reinfection. Some experts even propose the introduction of special “immune passports” that allow patients to move freely around the world. However, as scientists have found out, there are people whose body copes with a dangerous pathogen without it.

In early March, an article by Dutch researchers published on biorxiv.org that even never-ill COVID-19 can be immune to its pathogen. A month later, Nature published one of the most respected scientific journals in the world.

Biologists tested the 47D11 human monoclonal antibody obtained during an epidemic of severe acute respiratory syndrome – the so-called SARS. The SARS-CoV causing it is similar to the current pathogen.

Antibodies introduced into infected cells successfully neutralized viral particles. The authors of the work suggested that these antibodies can protect healthy people from infection, and help patients get rid of the virus.

Around the same time, a similar antibody was discovered by an international team of scientists led by the Swiss virologist Dora Pint. In the blood of a patient who suffered from SARS in 2003, they counted 25 antibodies, but only one neutralized the new coronavirus. It recognizes on the surface of the viral particle a portion of the S-protein characteristic of both pathogens, binds to it and does not allow SARS-CoV-2 to enter the cell.

In April, German researchers said that sometimes it is not antibodies that protect against coronavirus – the so-called humoral immunity, but T cells – cellular immunity. The bottom line is: macrophage cells eat the pathogen, and fragments of its proteins are then placed on its membrane. They, in turn, are recognized by T cells with the help of special receptors, which, like antibodies, belong to immunoglobulins and specifically bind to antigens. This contributes to the immune response.

As it turned out, in some T-cells are already able to respond correctly to SARS-CoV-2. That is why such people tolerate COVID-19 more easily or are generally asymptomatic.

Scientists took blood from patients with COVID-19 and healthy, not in contact with infected and without antibodies to SARS-CoV-2. Lymphocytes were isolated, which were then stimulated with molecules corresponding to various fragments of the coronavirus S-protein.

It turned out that almost 30 percent of healthy volunteers have T cells that respond to a dangerous pathogen protein. Moreover, most often they recognized those fragments of it that were similar to parts of the S-protein of other coronaviruses – for example, causing the usual cold HCoV-229E. Also, antibodies to this type of virus were detected in their blood. 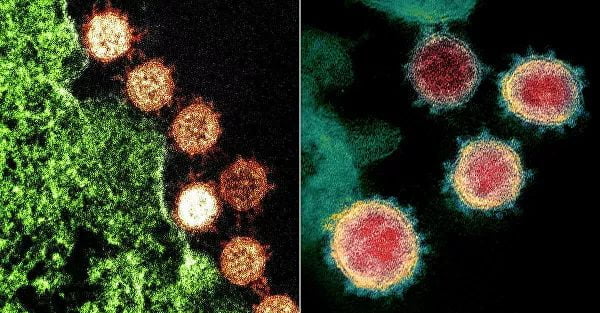 In addition, SARS-CoV-2 responsive T cells were found in most patients with COVID-19. Those who did not have them were sick, as a rule, harder.

According to the authors of the study, their data indicate the potential for cross-reactive cellular immunity to SARS-CoV-2. In other words, people who have previously had seasonal coronaviruses (it is believed that up to 20 percent of common ARVIs cause them) already have immunity to COVID-19.

This, in particular, can explain why children and young people more easily tolerate the disease. They often visit crowded places (the same kindergartens, schools and universities), which means that they are more likely to catch a common coronavirus cold, which, in turn, provides cross-reactive immunity.

The assumption of German scientists a month later was confirmed by their American colleagues who studied blood samples taken from patients from 2015 to 2018 – that is, when they did not know about COVID-19. In almost all biological materials, they found signs of specific cellular immunity, similar to those that appear upon infection with SARS-CoV-2.

We are talking about two types of immune cells – T-killers (CD8 cells) and T-helpers (CD4 cells). The former recognize cells infected with viruses and destroy them – sometimes on their own, sometimes calling for help from colleagues. The second increase the number of T-killers and enhance their response to a specific pathogen.

In about half of the samples taken three to five years ago, scientists identified specific CD4 cells that are now characteristic of people who have had COVID-19. In addition, CD8 cells, which are found in 70 percent of patients with the new coronavirus, were also present in 20 percent of them. So, almost half of the healthy population of the Earth may well be immune to a new disease, the authors of the work indicate.

An additional study of blood samples obtained in 2015-2018 showed antibodies to the two most famous human coronaviruses, HcoV-OC43 and HcoV-NL63. In other words, people who have previously had other coronavirus infections have gained immunity to SARS-CoV-2. This probably explains the asymptomatic COVID-19.

Mars could get its water reserves

Mars could get its water reserves