(ORDO NEWS) — In a letter Antarctic explorer Ernest Shackleton wrote to his friend Kitty Pogson, a London socialite, during his expedition in September 1902, he describes the extreme cold and its catastrophic effects on the crew.

“We unfortunately lost one of our men in a very bad blizzard by his falling over an ice cliff, and we nearly lost one of the lieutenants and three more men,” Shackleton wrote. “The weather is pretty cold now, the lowest temperature having been -62 F [minus 52.2 C].”

Nowadays, only a few thousand people — mainly scientists — visit Antarctica every year. Although Antarctica is the coldest continent, city dwellers on other parts of the globe routinely weather temperatures that are just as frigid. So what is the coldest city in the world? A church in Yakutsk, Siberia. Yakutsk has experienced temperatures as cold as minus 76 degrees Fahrenheit (minus 60 degrees Celsius)

That accolade belongs to the Russian city of Yakutsk. Located in Siberia, one of the world’s coldest and most sparsely populated regions, Yakutsk is home to around 336,200 people, many of whom work for Alrosa, a company that runs a diamond mine in the city .

Temperatures in Yakutsk have reached minus 76 degrees Fahrenheit (minus 60 degrees Celsius). Some residents insist they have experienced much colder days, but they have been unable to verify it because “the thermometer only reads down as far as -63 C [minus 81.4 F],” according to an interview by the BBC.

However, while Yakutsk is the coldest city, there are other, less-populous permanently inhabited places that are even more frigid. Oymyakon, a Russian settlement of around 500 people, reached a frosty minus 96.2 F (minus 71.2 C) in 1924.

Somewhat surprisingly, Yakutsk and Oymyakon aren’t that close to each other. They are separated by 577 miles (928 kilometers), and a drive from one to the other would take around 21 hours.

So why are these two places so bone-chilling? And why do people continue to live in these difficult, ruthless environments?

Siberia is so cold due to a “combination of high latitude and it being such a large land mass,” said Alex DeCaria, a meteorology professor at Millersville University in Pennsylvania. 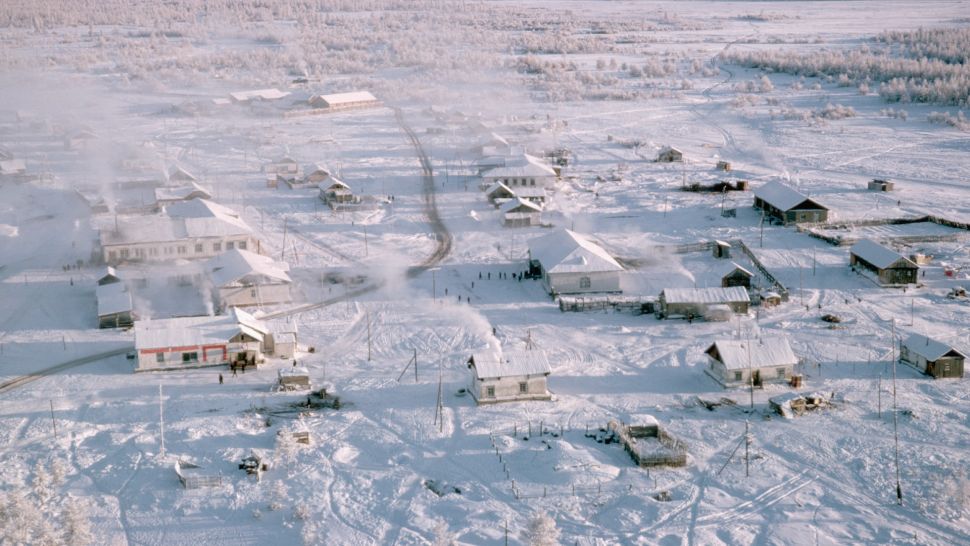 Global temperature extremes — both high and low — tend to occur over continents because land heats up and cools down faster than the oceans do. In the case of Siberia, snow and ice cover also play a role, as they help keep the region cool by reflecting the incoming solar radiation back into space.

This combination of factors has led to the creation of a large, semi-permanent high-pressure zone forming over Siberia in the winter, known as the “Siberian High.”

“High pressures over high-latitude continents are known generally for having stable air, low humidity and clear skies, which results in very cold surface temperatures,” DeCaria told Live Science in an email. That’s because low humidity and clear skies allow the longwave radiation (infrared and microwave) emitted by Earth to make it to the top of the atmosphere and be emitted into space, resulting in cold surface temperatures.

With specific reference to the conditions in Yakutsk and Oymyakon, topography also plays a part. “These places are in local valleys, surrounded by higher terrain,” explained Jouni Räisänen, a senior lecturer at the Institute for Atmospheric and Earth System Research (INAR) at the University of Helsinki in Finland.

These pockets of cold, relatively “heavy” air can become trapped close to the valley bottom. For Oymyakon, this effect is amplified by the relatively large height of the surrounding mountain ranges, which helps to “shelter the cold air lakes” from mixing with warmer air, Räisänen noted.

So why do people continue to live in these hostile Siberian locations?

“I think people take pride in where they live and the ingenuity they have to successfully live in harsh places,” Cara Ocobock, a biological anthropologist and the director of the Human Energetics Laboratory at the University of Notre Dame, told Live Science in an email.

So, when it comes to extreme temperatures, is it preferable to live somewhere very cold or very hot? After all, on the opposite end of the spectrum, the hottest cities are Karachi, Pakistan, and Ahvaz, Iran, both of which routinely see temperatures soar above 101 F (40 C); they have hit record highs of 118 F (47.8 C) and 129.2 F (54 C), respectively.

For Ocobock, there’s one clear answer: “Extremely cold! I love Finland in the winter, so give me the dark and the cold!”