(ORDO NEWS) — HSE researchers have developed a mathematical model that explains the levitation of charged dust particles over the surface of the Moon illuminated by the Sun for almost any latitude.

For the first time, the model takes into account the influence of the Earth’s magnetotail, a special space around our planet. The obtained data are important for planning the Luna-25 and Luna-27 space expeditions.

The moon in outer space is surrounded by plasma (ionized gas), which contains dust particles of solid matter. On the surface of the Earth’s satellite, dust particles under the influence of photons, electrons and ions of the solar wind acquire a positive charge.

Their interaction with the positively charged surface of the Moon leads to the fact that they start to repel, move and form a dusty plasma.

These factors suggest that dusty plasma on the Moon should form only over a certain part of the Moon’s surface (in the region of latitudes greater than 76°).

However, it is expected that dusty plasma can be observed over the entire illuminated surface of the planet. The authors of the article have developed a physical and mathematical model of dusty plasma motion, in which an important role belongs to the influence of the Earth’s magnetotail.

The magnetosphere of our planet is formed as a result of the interaction of its magnetic field with charged particles from space.

Under the influence of a magnetic field, particles such as the solar wind deviate from their original trajectory and form a region around the planet.

It has an asymmetric shape: on the day side it reaches dimensions of 8–14 Earth radii, and on the night side it is elongated and forms the Earth’s magnetic tail several hundred Earth radii long. 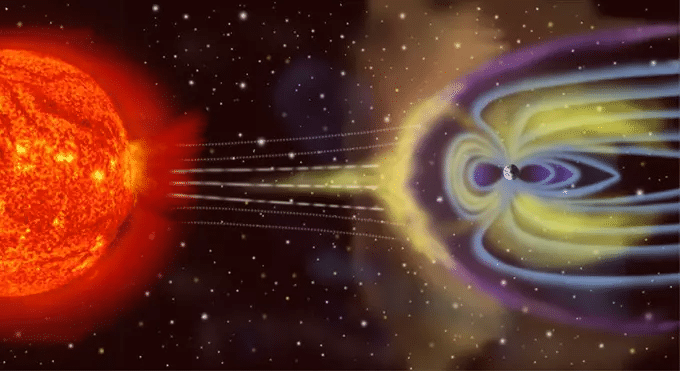 About a quarter of its orbit, the Moon is in the tail of the Earth’s magnetosphere, which affects the movement of particles along the meridian: under the influence of the strength of the magnetic field, they begin to move from the polar region to the equator.

The particles are also affected by gravitational and electrostatic forces. One attracts the dust grain to the surface, and the other, on the contrary, repels it.

This causes the particles to vibrate up and down. Then the particles go into a state of levitation. Scientists attribute the occurrence of this effect to the long daylight hours on the Moon: almost 15 Earth days.

During this time, the process of oscillation of the particles decays and they have time to go into a levitating state.

As scientists write, opposite phenomena are also observed. So, on the Martian satellites Phobos and Deimos, the damping time of dust oscillations is longer than the duration of daylight hours, so they do not have time to go into a state of levitation.

“Now the Luna-25 and Luna-27 missions are being planned, they will study the properties of dust and dusty plasma near the surface of the Moon.

“Now, using a simplified approach, we have explained how dust is transported over the lunar surface, taking into account the influence of magnetic fields in the Earth’s magnetotail.