(ORDO NEWS) — At the quantum level, what we do in the present can affect what happens in the past. This is shown in an experiment known as the quantum delayed choice or quantum eraser experiment.

Why are the factors associated with consciousness directly intertwined with physical matter at the quantum level? What does this mean when it comes to our physical material world in relation to our thoughts, perceptions, feelings and emotions?

One of the founders of quantum theory, Max Planck, who is often credited with creating quantum theory – an achievement that won him the Nobel Prize in Physics in 1918 – once said: “I consider consciousness to be fundamental.

Today there are many experiments in various fields that show that Planck was right. Consciousness is fundamental, and it is directly intertwined with what we call physical matter.

The classic experiment used to study the role of consciousness and its relation to matter is the double slit quantum experiment.

Observers are powerful players in the quantum world. According to the theory, particles can be in several places or states at the same time – this is called superposition. But, oddly enough, only in the case when they are not observed.

The moment you observe a quantum system, it chooses a certain place or state, thereby destroying the superposition.

The fact that nature behaves in this way has been repeatedly proven in the laboratory, for example, in the famous double-slit experiment. Let’s say that you let electrons through two slits and see what the picture will be on the screen behind them. I think many will agree that it should turn out something like this:

This is the so-called phenomenon of wave-particle duality, when the same electron behaves both as a particle and as a wave. And two waves in two slits, with the same maxima and minima, create a beautiful diffraction pattern:

Moreover, the diffraction pattern will be even if we let the electrons in one by one, that is, each of them must pass through both slits, but at the same time, each of them will leave only one trace on the screen.

This seems strange, because one particle cannot be in two places at the same time. Therefore, we put a detector next to one of the slits, and what will we see?

There will be only two stripes on the screen just opposite the slits (first picture), that is, our observation of the superposition destroys it, and each electron begins to pass through only one slit.

Even people who are far from science know about Schrödinger’s cat: there is a closed box with a cat and a mechanism that will kill the animal with a 50% probability in an hour.

Therefore, before opening the box, we do not know whether the cat is alive in it or not – for us, it is in a superposition, in a state of “neither alive nor dead.”

In 1961, physicist Eugene Wigner proposed an elaborate version of the experiment. He introduced the category of “friends”.

After completing the experiment, the experimenter opens the box and sees a live cat. The superposition collapses because he observed the state of the cat. Thus, in the laboratory, the cat was recognized as alive.

And all other people have not yet recognized the cat as alive, and they will recognize it only when they are informed of the result of the experiment.

Thus, a cat can be considered completely alive (or completely dead) only when all people in the Universe know the result of the experiment. Up to this point, on the scale of the universe, the cat, according to Wigner, remains alive and dead at the same time. 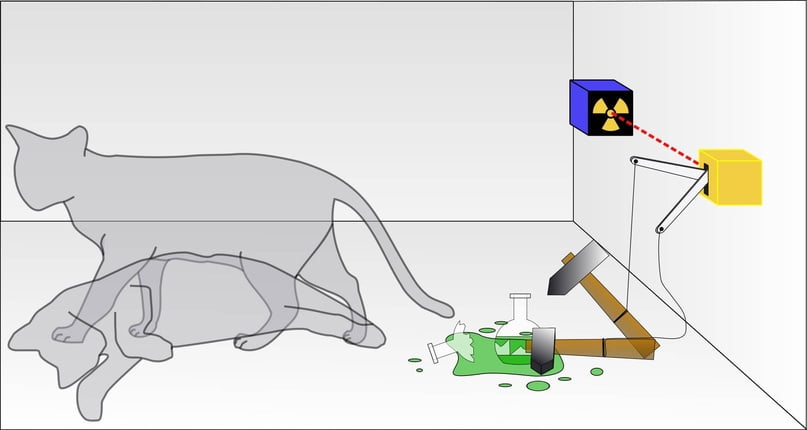 This is a mystery. The reality perceived by the experimenter in the laboratory cannot be reconciled with the reality outside. Initially, Wigner did not see this as a great paradox: he argued that it would be absurd to describe a conscious observer as a quantum object.

However, he later moved away from this point of view, and according to textbooks on quantum mechanics, there are no contradictions in such an experiment.

If that doesn’t change your mind enough, one physicist, John Archibald Wheeler, wondered what would happen if we didn’t interfere with photons on their way through the slits?

What happens if we don’t set up a measuring instrument to see which slit the material passes through, but instead, what if there are detectors behind the back wall?

One detector is pointed at each slit, and just before the particle passes through the slit device and lands on the screen, the detectors are retracted. When no one could tell which slit the photon went through, there was a wave pattern, but when the detectors were in place, there was no wave pattern.

Similar to observing particles before they have passed through the slit. Lack of observation led to an interference pattern, and observation formed a pattern of one line,

If they collapse into a state of particles from a wave at the moment of detection, after they have passed through the slit, this means that even if they passed through the slit without observation and should create a wave (interference) pattern, the very act of observation, however, instantly turns them into particles and collapses the wave function.

Like the double slit quantum experiment, the delayed choice/quantum eraser experiment has been demonstrated and repeated many times.

For example, physicists at the Australian National University (ANU) conducted John Wheeler’s delayed choice thought experiment, the results of which were recently published in the journal Nature Physics.

In 2007 (Science 315, 966, 2007), scientists in France fired photons at a craft and showed that their actions could retroactively change what had already happened.

“If we try to attribute an objective meaning to the quantum state of an individual system, curious paradoxes arise: quantum effects imitate not only instantaneous action at a distance, but also, as we see here, the influence of future actions on past events, even after these events have been irrevocably recorded.”

To make the experiment more understandable, Wheeler used an explanation on a cosmic scale. Imagine a star that emitted a photon billions of years ago and is heading towards the planet Earth. Between them is a galaxy.

As a result of the so-called “gravitational lensing”, the light will have to go around the galaxy to reach the Earth, so it will have to choose one of two paths – to the left or to the right.

Billions of years later, if one decides to set up an apparatus to “catch” a photon, the result will be an interference pattern, as explained above in the double slit experiment.

This indicates that the photon went in one direction, and in the other – in the other. A wave of opportunities, but the path it took is not defined.

One can also “spy” on an incoming photon by setting up a telescope on each side of the galaxy to determine which side the photon came from to reach Earth.

The very act of measuring or “observing” which side a photon comes from means that it can only come from one side. The picture will no longer be an interference pattern representing many possibilities, but will be a single bunch pattern showing “one” path.

What does this mean? This means that how we choose the “now” dimension affects which direction the photon took billions of years ago. Our choice in the present moment affects what has already happened in the past.

I can’t stop thinking about this and what it might mean, and how the factors associated with consciousness intertwine with what we perceive to be our physical reality.

“The day science begins to study non-physical phenomena, it will make more progress in one decade than in all the previous centuries of its existence.” – Nikola Tesla

Why is all this important? Because this is one of many experiments that show a strong connection between consciousness and physical matter.

If human consciousness can be so fundamental in regards to “creating our reality”, why don’t we talk about it more? What impact will the change in our view of the world have on human experience? What happens if we start to see things in a different light?