(ORDO NEWS) — At the moment, the Earth is the only planet known to the scientific community on which life exists. Perhaps it is even good that at the moment humanity has not been able to detect alien creatures, because we have not yet managed to fully study even a small part of all terrestrial animals. But among them there are very interesting creatures, such as giant armadillos (Priodontes maximus), which mainly live in South America.

At first it may seem that these ridiculous-looking creatures are completely uninteresting. But did you know that they are considered to have the largest number of teeth among all mammals that live on land? What about the length of their claws equal to the length of an adult’s palm? As part of this material, I propose to find out some interesting facts about these animals and make sure

To begin with, it’s worth talking a little about the structure of their body. Throughout history, scientists have been able to detect giant battleships with a body length of 75 to 100 centimeters, that is, they are no longer than one meter. The body weight of individuals living in the wild does not exceed 32 kilograms, but some of them are kept in reserves and zoos – so they can “fatten” up to 60 kilograms. The body of armadillos is covered with a shell consisting of bone plates with keratinized skin. The armor of these creatures is colored brown, and the belly is much lighter.

As mentioned above, giant armadillos have the largest number of teeth among all land mammals. They have 80 to 100 teeth in their mouths, but with them they can hardly tear other animals apart. In general, armadillos are considered quite peaceful creatures. During the day they sleep, and go out hunting only at night. Their diet consists of ants and insect larvae. Fortunately, they live in a humid jungle, where such “goodies” are simply in bulk for them. To catch insects, they use their long tongue, which looks like a writhing worm covered with saliva. Their eyesight is poor, so during the hunt, it remains to rely only on the sense of smell. 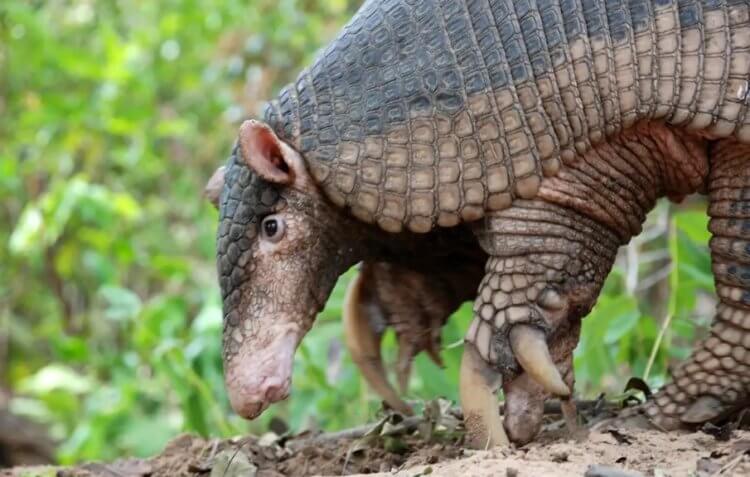 The longest nails in animals

The length of the nails, or more precisely, the claws, of the giant armadillos is the largest in the animal kingdom. According to researchers who had to work with these creatures for a long time, their length corresponds to the length of the palm of an adult. Their long nails, as you might guess, are necessary for digging holes, which are used both for housing and for hunting ants and insect larvae. As a rule, they equip dwellings up to 7 meters deep near water and trees. The nest chamber in which the armadillos sleep is located at the very end of the burrow and is lined with dry leaves and grass. After the rains, this litter becomes wet, so armored creatures have to renew it with their own hands.

Enemies of the battleship

Armor was given to these creatures for a reason. The fact is that battleships have quite a few natural enemies. For example, they are hunted by wolves, coyotes, dogs and even humans. When in danger, these unusual animals can curl up into a ball and turn into an “armored ball”. Thanks to a durable shell, they are not afraid of the bites of any predators. If you have to fight, armadillos stand on their hind legs, propping up their body with their tail. Huge claws can also go into battle, so predators should think several times before attacking these creatures. They are too well protected and armed at the same time.

At the moment, giant armadillos are considered vulnerable animals, therefore they are under protection. The greatest danger to these creatures is man. A large number of battleships die under the wheels of cars. They also often look at agricultural fields, but only in search of insects and vegetation do not touch. But often they still fall prey to people. They are even more at risk that their meat can be eaten.

Can a person only feed on blood like a vampire

Can a person only feed on blood like a vampire