(ORDO NEWS) — Although for us, for people, the stars seem to be eternal, they still have their own lifespan. Upon reaching the end of their evolutionary path, stars can die in several ways, depending on their mass.

Perhaps the most spectacular events are the death of stars with a mass of eight solar masses, which flare (explode) in supernovae. The explosion of a massive star is an extremely high-energy event, releasing so much energy that for a short period of time the explosion can outshine an entire galaxy.

Thanks to such incredible brightness, we, armed with powerful telescopes, can observe supernova explosions occurring millions of light years from Earth, far beyond the Milky Way.

However, if a supernova explosion occurs in our own Galaxy, then we will witness an incredible spectacle without any special tools. Fortunately, Betelgeuse, 642.5 light-years away from Earth, may soon become such a star.

Betelgeuse heading for a supernova explosion

Betelgeuse is a red supergiant in the constellation of Orion, which is its shoulder, to be more precise. The star Betelgeuse is about 700 times larger than our Sun , and if you follow the astronomical news, you may have heard that in October 2019 it suddenly dimmed.

Betelgeuse’s fading is not unusual, as the star had a variable brightness over thousands of years, which varied to the point that the ancient Greeks and Australians even noticed it.

However, the fading recorded in 2019 was very unusual, as the star became about 6.5 times dimmer, which is significantly more than all the fading that has been recorded over the past 100 years of measurements.

Does this mean that Betelgeuse will explode soon? Astronomers do not think so, linking this phenomenon with the fact that the star has only shed a small part of its shell. This process proceeded within the framework of certain stellar cycles, which do not at all indicate the readiness of the star to explode in a supernova.

What if Betelgeuse really exploded?

Still, it’s interesting to see what we’d see if Betelgeuse really exploded. This is exactly what astronomers Jared Goldberg and Evan Bauer at the University of California, Santa Barbara (UCSB) tried to figure out.

They, using a specialized stellar evolution algorithm called MESA+STELLA, were able to create many simulations of Betelgeuse with different parameters, and then calculated what it would look like from Earth. The results obtained did not disappoint: 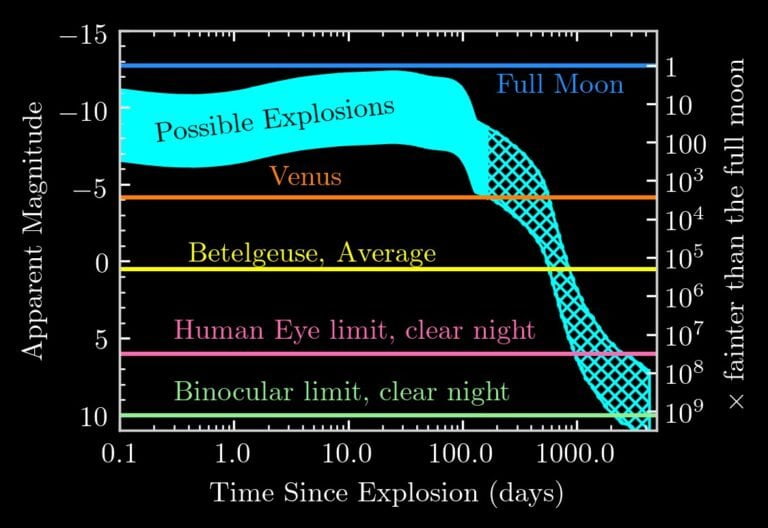 This means that for about three months we will have a very bright star in the sky, capable of casting shadows during the day and bright enough to read under its light at night. After that, the supernova will begin to dim and disappear from our field of view in about three years.

However, people don’t have to worry about any destructive radiation from an exploding supernova. Hundreds of light years separate the Earth from Betelgeuse, and if its explosion occurs during our lifetime, then we should just relax and enjoy the “cosmic fireworks”.