(ORDO NEWS) — A physician at the beginning of the 20th century weighed several patients at the time of death to determine the weight of their departed souls. He put dying patients on the scales and determined that the weight of the human soul is 21 grams.

Most religious people believe in eternal life for believers, in the continuation of a life force that goes far beyond mortal flesh.

In such belief systems, death is not an end, but a transformation: although at the moment of death, people lose their bodily essence, what made them unique beings continues to live in order to reunite with the Creator.

We call this inner individuality “soul” – an entity described in the dictionary as “an immaterial entity, the animating principle or efficient cause of individual life.”

However, no matter how much we believe in the concept of “soul”, this vital spark remains exclusively a matter of faith. As important as it is to our perception of ourselves, it cannot be seen, heard, smelled, touched, or tasted, and this state of affairs haunts some of us.

Dead without a soul is dead. But if its existence could be proved, then many of the anxieties about what happens to us after death would be removed.

The belief that humans possess souls that leave their bodies after death, and that these souls have a detectable physical presence, existed long before the 20th century, but claims that souls possess a measurable mass that falls within a certain range of weights, can be traced back to the experiments carried out by Dr. MacDougal in 1907.

Dr. McDougall, in an effort to determine “whether mental functions continue to exist as a separate individual or personality after the death of the brain and body,” built a special bed in his office, “located on a light frame built on a very delicately balanced platform beam balance,” sensitive to two tenth of an ounce.

He laid on this bed six patients who were in the last stages of incurable diseases (four from tuberculosis, one from diabetes and one from undetermined causes), observed them before, during and after the death process, and measured all relevant changes in weight.

He then tried to rule out as many physiological explanations for the observed results as he could think of.

“The comfort of the patient was taken care of in every way, although he was practically immobilized when he was laid on the bed. He was slowly losing weight at the rate of one ounce per hour due to the evaporation of moisture from his breath and the evaporation of sweat.

For the entire three hours and forty minutes, I kept the end of the bar slightly off balance near the upper limit bar to make the test more convincing if it came.

At the end of three hours and forty minutes, he died, and suddenly, at the same time as his death, the end of the beam fell with a resounding blow, hitting the lower limiting bar, and remained there without rebounding. The weight loss was found to be three-quarters of an ounce.

This loss of weight could not have been caused by the evaporation of moisture from the respiratory passages and sweat, since it had already been established that in his case this occurred at a rate of one sixtieth of an ounce per minute, while this loss was sudden and large, three-quarters of an ounce in a few seconds.

The intestines did not move; if he moved, the weight would still remain on the bed, except for a slow loss due to the evaporation of moisture, depending, of course, on the fluidity of the feces. The bladder excreted one or two drams of urine.

She remained on the bed and could only affect the weight by slow gradual evaporation and therefore had no way of explaining the sudden loss.

It remained to investigate one more channel of loss – the exit of all residual air from the lungs. Climbing onto the bed, my colleague brought the beam into a state of virtual equilibrium. The inhalation and exhalation of air, made by me with the greatest possible effort, had no effect on the beam.

My colleague sat on the bed, and I brought the beam into balance. Forced inhalation and exhalation of air on his part had no effect. In this case, we certainly have an inexplicable weight loss of three-quarters of an ounce. Is it a matter of the soul? How else can we explain this?

McDougall repeated his experiment with fifteen dogs and noted that “the results were equally negative, there was no weight loss at death.”

This result seemed to confirm McDougall’s hypothesis that the weight loss recorded at human death is due to the departure of the soul from the body, since (according to his religious doctrine) animals do not have a soul.

(McDougall’s explanation that “ideal tests on dogs would be obtained on dogs dying from some disease that rendered them severely malnourished and unable to fight”, but “I have not been lucky enough to get dogs dying from such a disease” led the author Mary Roach remarked that “except for a local outbreak of plague, one has to assume

In March 1907, reports of McDougall’s experiments were published in The New York Times and the medical journal American Medicine, causing, in Mary Roach’s words, “a heated discussion” in the latter’s letter column:

“Massachusetts physician Augustus P. Clark accused McDougall of not taking into account the sudden increase in body temperature at the time of death, when the blood ceases to be cooled by air as it circulates through the lungs.

Clarke suggested that the sweating and evaporation of moisture caused by this rise in body temperature explained both the weight drop in the men and the dogs’ failure to register it. (McDougall objected that without blood circulation, blood cannot flow to the surface of the skin and therefore there is no surface cooling.) 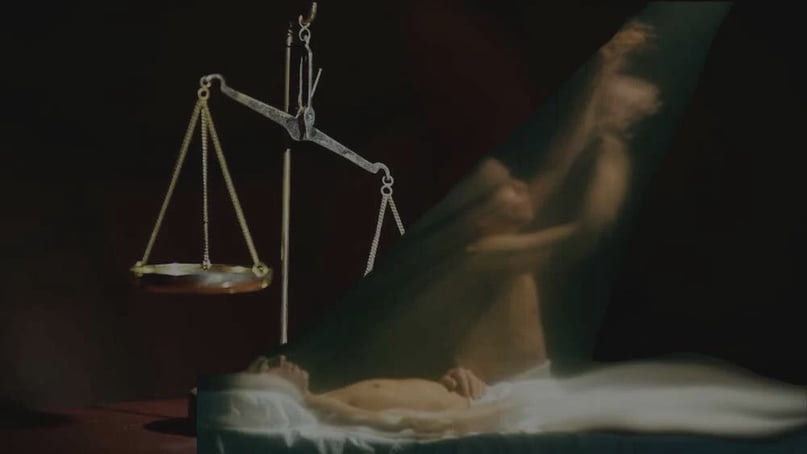 McDougall believed he was on to something four years later, The New York Times reported on the front page that he had moved on to experiments that he hoped would allow him to take pictures of the soul:

“Dr. Duncan McDougall of Haverhill, who has experimented extensively in the field of death observation, in an interview published here today, expressed doubt that the X-ray experiments that are going to be carried out at the University of Pennsylvania will be successful in imaging the human soul, because X-rays are actually a shadow image.

He admits, however, that at the time of death the soul-substance may become so excited as to lessen the obstruction which the bones of the skull usually make for x-rays, and may therefore be shown on the plate as a bright spot on the dark shadow of the bone.

Dr. MacDougall is convinced, after a dozen experiments with dying people, that the soul substance emits a light that resembles the light of the interstellar ether.

McDougall does not seem to have made any more experimental discoveries in the field of measuring the human soul after 1911 (at least none of them were considered outstanding enough to be reported in the pages of the New York Times), and he died in 1920.

However, his legacy lives on in the oft-spoken idea that the human soul weighs 21 grams. (At the time of death, the weight of McDougall’s first test subject was reduced by three-quarters of an ounce, which is 21.3 grams).