(ORDO NEWS) — Virus strain causing smallpox outbreak in non-endemic countries likely descended from the smallpox virus that caused the outbreak in Nigeria in 2018-19 and has many more mutations than would be expected, some of which increase virus transmission.

The study was carried out by Portugal’s National Institute of Health in Lisbon, which was the first to sequence the current strain that has caused more than 3,000 cases of monkeypox in Europe, North America and other regions where the virus had not been encountered until this year.

The researchers found that the current strain differed from the original strain by 50 single nucleotide polymorphisms (SNPs), and several mutations made the virus more transmissible.

The strain belongs to clade 3 of the West African strain of the virus, which is less lethal than the clade from the Congo Basin. Monkeypox outbreaks in clade 3 are commonly reported from western Cameroon to Sierra Leone and typically have a mortality rate of less than 1%.

The authors said the outbreak was most likely not caused by an undetected silent spread or animal-to-human transition.

Instead, “the available evidence points to a scenario of more than one introduction from a single source, with superspreader(s) (eg, saunas used for sexual contact) and travel abroad, which likely caused a rapid worldwide spread.”

The authors also noted that the 50 SNPs that differ from the parent strain are much larger (about 6-12-fold) than would be expected given previous estimates of the substitution rate for orthopoxviruses, which typically have 1-2 substitutions per site per year. .

In another study published today in The Lancet Microbe, scientists use simulations to predict what will happen in non-endemic countries if public health measures are not taken to contain ongoing outbreaks.

Contact tracing and surveillance, symptomatic case isolation, and ring vaccination would reduce secondary cases by 86.1% and outbreak duration by 75.7%, the authors conclude.

The authors also noted that the outbreak is of moderate international concern. The World Health Organization consultants are currently deciding whether the outbreak is a public health emergency in a two-day meeting.

The total number of cases in the country is 173 in 24 states, according to the US Centers for Disease Control and Prevention, up 17 cases from yesterday.

A New York City sexual health clinic offering the monkeypox vaccine to men who have sex with men was forced to close due to excessive demand. Many men applied for the vaccine in the days leading up to Pride celebrations.

Portugal now has 348 cases of monkeypox, with 20 new cases in the last 24 hours. Along with Spain and the UK, Portugal has the highest number of cases in Europe.

Croatia and Taiwan reported their first cases of the virus. 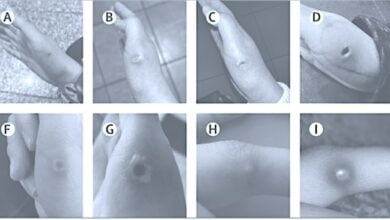