(ORDO NEWS) — Observations made with the Very Large Telescope of the European Southern Observatory ( VLT ESO ), revealed clear signs of the birth of a stellar system around the young star AB Aurigae in the constellation Auriga. And at a distance approximately corresponding to the distance from Neptune to the Sun, astronomers noticed a spiral structure with a “bend”, which is a sign of planet formation.

“So far, thousands of exoplanets have been identified, but we still know little about how they form. We need to observe very young systems in order to actually capture the moment the planet was born,” Anthony Boccaletti, lead author of the study.

It is known that planets are born in gas and dust disks surrounding young stars, such as AB Aurigae , when clots of matter from cold gas and dust form. New observations from the VLT ESO published in Astronomy & Astrophysics provide a better understanding of this process.

As they move in orbit, protoplanets act as sources of gravitational attraction, as a result of which near-solar matter is stratified into rings, and then collected in clumps in certain orbits (something like a trace that a boat leaves on lake water). Over time, this footprint takes the form of a spiral sleeve. Out of these clots, ultimately, planets form. The sizes of the planets depend on the distance to the newborn star.

Observations of the AB Aurigae system several years ago using the Atacama Large Millimeter-Wave Antenna (ALMA) gave the first hints of the continuous formation of planets around the star.

In the ALMA images, scientists found two spirals: gas arms next to the star, lying in the inner region of the disk. Then, in 2019 and early 2020, Bokaletti and a group of astronomers from France, Taiwan, the United States and Belgium deployed the SPHERE tool on the VLT ESO towards the star, receiving the deepest and most detailed images of the star system. 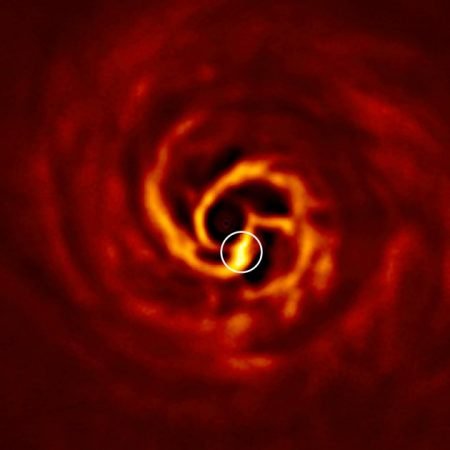 “Such a bend is predicted by some theoretical models of planet formation. He marks the connection point of two spiral branches – one spinning inward into the orbit of an emerging planet, and the other spinning outward. These spirals are connected at the point of planet formation. Spirals allow gas and dust from a disk to settle on an emerging planet, causing it to grow,” said Ann Datry, co-author of the study.

ESO is building now Extremely Large Telescope With a diameter of 39.3 meters, which will rely on the advanced developments of ALMA and SPHERE to study objects outside the solar system. As Boccaletti explains, this powerful telescope will allow astronomers to obtain even more detailed images of planets in the process of formation.