(ORDO NEWS) — Retiree Janet Hawk wanted to turn her body into coral after death. A 77-year-old resident of the United States decided to become part of the marine ecosystem, according to The Guardian.

In her will, Hawk indicated that her remains should be placed in a reef ball – a small concrete dome with holes. They are manufactured by Eternal Reefs.

The organization mixes the customer’s cremated ashes with a neutral pH concrete (a pH value that determines the acidity of the solution) and submerges the structure in sea water.

Such a dome weighs from 250 kilograms to 1.8 thousand kilograms and has a rough surface – it allows corals and algae to eventually grow on the ball and form an artificial reef. Relatives of the deceased are informed of the coordinates of the location of the “grave”.

Eternal Reefs believe their product has the potential to help marine ecosystems recover. Due to global warming and pollution, coral reefs important for other inhabitants of the water began to disappear.

According to company representatives, many are attracted by the opportunity to participate in saving the planet after death. To date, the organization has placed about three thousand reef balls in the sea in 25 cities in several US states.

Some experts oppose burial in this way. Turning a body into coral involves an environmentally damaging cremation – burning one body releases about 400 kilograms of carbon dioxide (CO2) into the atmosphere. In addition, reef balls are made from concrete, the production of which is responsible for eight percent of all CO2 emissions.

Natural Death Center manager Rosie Inman-Cook said projects such as turning a body into a tree or coral only detract from the need for more global change in the funeral industry. Natural burial would be best for the environment, she said.

Janet Hook noted that at first she was also skeptical about new burial methods. However, she subsequently saw how reef balls become part of marine life. In addition, the woman believes that in this way she will be able to save her relatives from the need to look after her grave.

“That video I saw shows how quickly these domes turned into fish habitat, so the idea seemed to me to work. I love the idea that I can help rebuild something that’s been destroyed,” Hook said.

In January, the Australian authorities allocated a billion dollars to save the Great Barrier Reef – the world’s largest living structure with a length of 2.5 thousand kilometers.

Due to climate change and coral-eating starfish, the “eighth wonder of the world” has been hit hard in recent years. The allocated funds will be used to improve the quality of water around the reef. 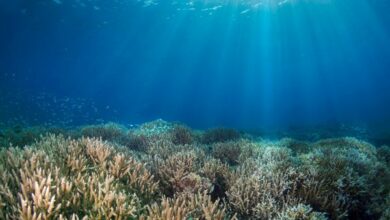 Biologists have discovered that coral access to sunlight can save them