(ORDO NEWS) — Climate change is on track to ramp up the annual cost of US flood damage more than 25 percent by 2050, according to new research Monday that warns disadvantaged communities will likely bear the brunt of the financial burden.

Losses include destruction projected to hit homes and businesses. Researchers warned that even more people are expected to move into areas at growing risk of inundation.

“Climate change combined with shifting populations present a double whammy of flood risk danger and the financial implications are staggering,” said lead author Oliver Wing, of the University of Bath’s Cabot Institute for the Environment.

Wing said the findings should be a “call to action” for both a reduction in emissions and efforts to adapt to accelerating climate risks “to reduce the devastating financial impact flooding wreaks on people’s lives”.

Researchers used nationwide property asset data, information on communities, and flood projections to estimate flood risk across the US.

But future growth in flood risk is expected to have a greater impact on African American communities on the Atlantic and Gulf coasts.

“The mapping clearly indicates Black communities will be disproportionately affected in a warming world, in addition to the poorer White communities which predominantly bear the historical risk,” said Wing.

“Both of these findings are of significant concern.” 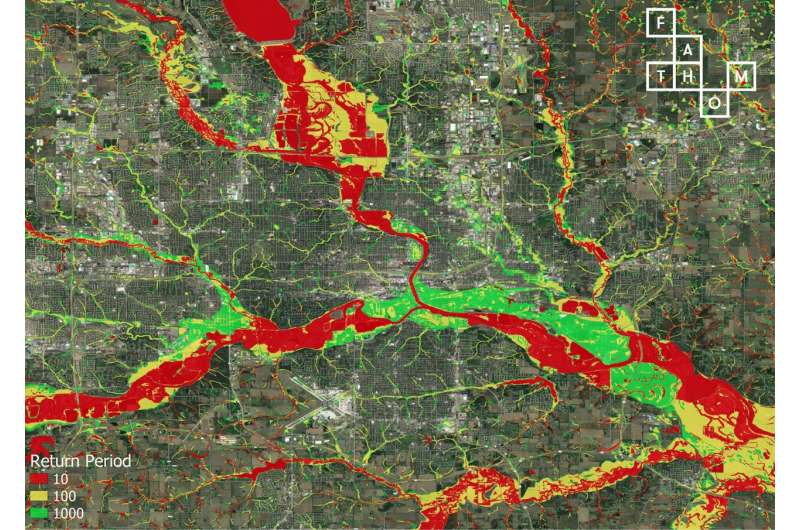 The researchers said these figures are “essentially locked in climatically”, meaning that even if emissions fall dramatically they would still be the same.

They also warned that expanding populations in the US would also significantly increase the flood risk, eclipsing even the impact of climate change.

With inundations expected to intensify in areas where populations are also increasing, the researchers said average annual exposure of the US population to floods is expected to grow to more than 7 million by 2050, a 97-percent increase from current levels.

It said increases in climate-enhanced exposure was particularly concentrated along the US East Coast, with existing Texas and Florida residents seeing a roughly 50-percent increase in flood exposure by 2050. In terms of increased flood risk due to population growth, the researchers highlighted intensified development on existing floodplains, which they said was “relatively severe in the currently sparsely populated central Prairie States and the Deep South”.

The study said even developments currently considered low risk may be in areas expected to see a heightened flood risk in the coming decades.

“Current flood risk in western society is already unacceptably high, yet climate and population change threaten to inflate these losses significantly,” said co-author Paul Bates, a professor of hydrology at the Cabot Institute for the Environment.

“The relatively short timescales over which this increase will take place mean we cannot rely on decarbonization to reduce the risk so we have to adapt better, both to the situation now and for the future.”