(ORDO NEWS) — Climate change will drive an increase in summer air conditioning use in the United States likely to cause prolonged blackouts during peak summer heat if states do not expand capacity or improve efficiency, according to a new study of household-level demand.

The study projected summertime usage as global temperature rises 1.5 degrees Celsius (2.7 degrees Fahrenheit) or 2.0 degrees Celsius (3.6 degrees Fahrenheit) above preindustrial levels, finding demand in the United States overall could rise 8% at the lower and 13% at the higher threshold. The new study was published in Earth’s Future, AGU’s journal for interdisciplinary research on the past, present and future of our planet and its inhabitants.

Human emissions have put the global climate on a trajectory to exceed 1.5 degrees Celsius of warming by the early 2030s, the IPCC reported in its 2021 assessment. Without significant mitigation, global temperatures will likely exceed the 2.0-degree-Celsius threshold by the end of the century.

Previous research has examined the impacts of higher future temperatures on annual electricity consumption or daily peak load for specific cities or states. The new study is the first to project residential air conditioning demand on a household basis at a wide scale.

It incorporates observed and predicted air temperature and heat, humidity and discomfort indices with air conditioning use by statistically representative households across the contiguous United States, collected by the U.S. Energy Information Administration (EIA) in 2005-2019.

The new study projected changing usage from climate influence only, and did not consider possible population increases, changes in affluence, behavior or other factors known to affect air conditioning demand.

“We tried to isolate just the impact of climate change,” said Renee Obringer, an environmental engineer at Penn State University and lead author of the new study. “If nothing changes, if we, as a society, refuse to adapt, if we don’t match the efficiency demands, what would that mean?”

Technological improvements in the efficiency of home air conditioning appliances could supply the additional cooling needed to achieve current comfort levels after 2.0 degrees global temperature rise without increased demand for electricity, the new study found. Increased efficiency of 1% to 8% would be required, depending on existing state standards and the expected demand increase, with Arkansas, Louisiana and Oklahoma on the high end.

“It’s a pretty clear warning to all of us that we can’t keep doing what we are doing or our energy system will break down in the next few decades, simply because of the summertime air conditioning,” said Susanne Benz, a geographer and climate scientist at Dalhousie University in Halifax, Nova Scotia, who was not involved in the new study. 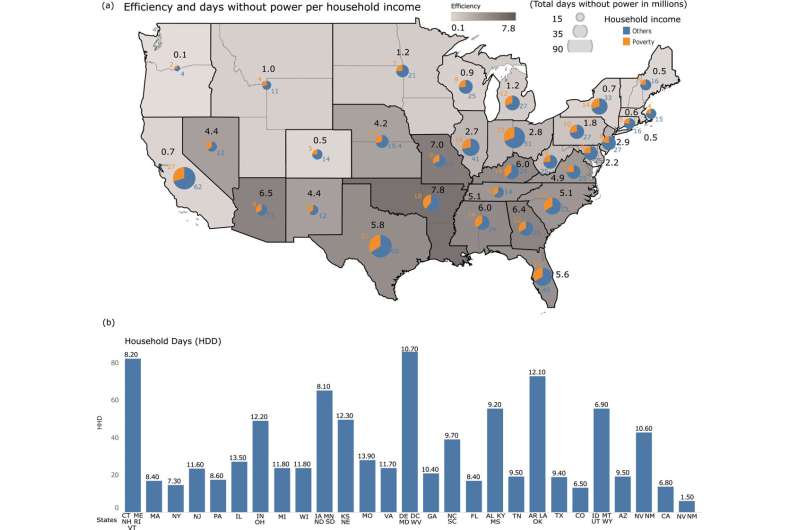 The heaviest air conditioning use with the greatest risk for overloading the power grid comes during heat waves, which also present the highest risk to health. Electricity generation tends to be below peak during heat waves as well, further reducing capacity, Obringer said.

Without enough capacity to meet demand, energy utilities may have to stage rolling blackouts during heat waves to avoid grid failure, like California’s energy providers did in August 2020 during an extended period of record heat sometimes topping 117 degrees Fahrenheit.

“We’ve seen this in California already—state power suppliers had to institute blackouts because they couldn’t provide the needed electricity,” Obringer said. The state attributed 599 deaths to the heat, but the true toll may have been closer to 3,900.

The new study predicted the largest increases in kilowatt-hours of electricity demand in the already hot south and southwest. If all Arizona households were to increase air conditioning use by the estimated 6% needed at 1.5 degrees Celsius of global warming, for example, amounting to 30 kilowatt-hours per month, this would place an additional 54.5 million kilowatt-hours of demand on the power grid monthly.

Some of the highest percentage increases over current demand can be expected in Midwestern states, which could strain energy capacity in the region. The added demand of global temperature rise from 1.5 degrees Celsius to 2.0 degrees Celsius could triple demand in Indiana and Ohio, underlining the importance of mitigation to limit temperature increases, Obringer said.

US stocks open mostly in the red

Coronavirus in the US: disappointing statistics

US stocks open mostly in the red

Coronavirus in the US: disappointing statistics