Hornets – and so the insects are not the most pleasant: quite aggressive, large, loudly buzzing and stinging painfully. What to speak of Vespa Mandarinia – this species, or “giant Asian hornet,” is the largest hornet species in the world. At Vespa Mandarinia has many names: in Japan his name hornet-tiger (for black and a red-striped coloring) and sparrow-bee (for outstanding size and a wingspan of 8-9 centimeters).

These hornets can exceed five centimeters in length, and their jagged mandibles are powerful and dangerous weapons. It is with his help that they can kill a whole bee hive in a matter of hours, leaving a handful of severed heads at the crime scene – they take away the thorax (chest part) of the bees to feed the growing individuals. That is why giant Asian hornets are a thunderstorm for beekeepers. 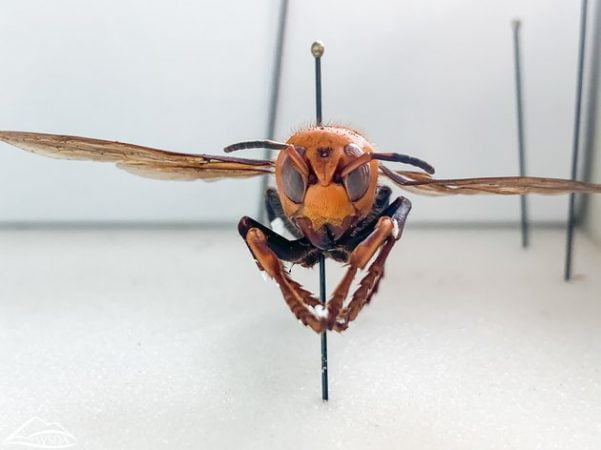 A man is a larger target for Vespa Mandarinia , but he is too tough for them: powerful poison and a sting long enough to pierce even a beekeeper’s costume create a painful sensation for the victim, which people describe as “red-hot iron piercing the flesh” . Moreover, an aggressive attack by a whole swarm of hornets can expose victims to large doses of toxic poison equivalent to a bite of a poisonous snake; a number of bites can be fatal. That’s why Vespa Mandarinia got another nickname – killer hornets. In Japan, hornets kill up to 50 people a year.

These terrifying insects live, as you can easily guess by their name, mainly in Asia: Korea, China, Japan, and are also found in the Primorsky region of our country. However, not so long ago their appearance was recorded in the USA, which frightened local beekeepers and excited users of social networks.

Last fall, two giant Asian hornets were discovered in the northwestern state of Washington – these were the first two cases officially confirmed by the Ministry of Agriculture of the country. There were other reports of encounters with a dangerous insect (some beekeepers believe that it was the killer hornets that should be blamed for the brutal death of their bee families), but whether it was Vespa Mandarinia specifically is still unknown. These hornets have recently begun to be noticed in Canada, which is also there for the first time.

Since then, scientists have begun a full-scale hornet hunt, fearing that invaders could destroy bee populations in the United States and spread so widely that any hope of eradicating them could be lost.

“Most people are afraid of their bites,” says beekeeper Ruthie Danielsen, “we are afraid that they will destroy our hives.”

Now American scientists are trying to track down groups of hornets. This is a difficult task in a region with many forests: how to find a den of insects that can be hidden underground? And where to look, given that individuals can fly many kilometers a day? The wooded landscape and mild, humid climate of Washington State make it an ideal place for hornets to spread.

Biologists have prepared home-made traps with which they hope to lure and catch hornets. Then they plan to attach the sensor to them on the back (insects are so large that they will fly away with it without difficulty) and monitor their movement. It is possible that thermal imaging systems will also be used to locate the hornets’ habitat – many buzzing insects significantly increase the temperature inside the nest.