(ORDO NEWS) — The specific reasons for what happened are quite complex and not too obvious. But the Chinese experience indicates that the view that urbanization is unfriendly to nature may not be fully justified.

An international team of researchers (mostly of Chinese origin) tried to find out, using satellite imagery, how much urbanization in China has changed the situation with the total biomass in this country. The main part of terrestrial biomass is trees, and it was on them that the study was directed.

In the past 30 years, 290 million Chinese have moved from rural areas to urban areas. This was accompanied by a multiple growth of urban development in the republic. It is generally believed that, since development covers large areas with asphalt and concrete, leaving only isolated islands of greenery, it leads to a serious reduction in plant biomass.

The authors of the new work decided to test these ideas by comparing the demographic data on urbanization in a particular area of ​​China with satellite imagery data in the same regions. Satellites often make it possible to identify processes in nature that are difficult to detect from other sources.

For example, until 2018, it was believed that the area of ​​​​forests on the planet was declining due to logging. However, satellite imagery work published that year showed that forest area was actually growing rapidly.

It’s just hard to notice from the surface of the planet, because it is extremely difficult to estimate the total number of trees on it (requires too many ground specialists).

The results of the new work were largely unexpected – like her predecessor, who studied forests. It turned out that in 2002-2010, the loss of above-ground plant biomass due to urbanization amounted to 20 million tons, and for China this is not so little.

After 2010, the decline in biomass stopped, as the bulk of the building land had already been repurposed. But the growth of green biomass in the new development zone did not stop – it went on throughout 2002-2019. The study has not yet covered a later period. 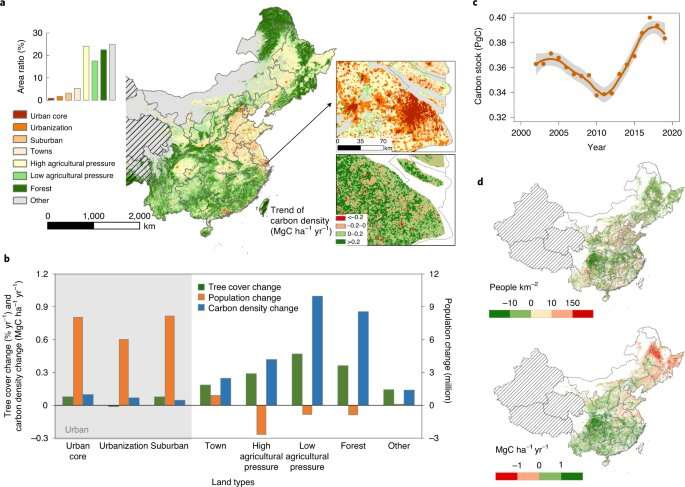 As a result, the growth of green biomass in new urban development raised this figure for China by 50 million tons. The excess of the increase over the decrease gave a net increase of 30 million tons.

However, due to the limited areas of urbanization, this effect did not determine the overall development of the situation in the country.

Its above-ground green biomass increased by 290 million tons per year in the same years, but mainly due to processes taking place outside cities – and often even outside agricultural land. This is part of the so-called global greening.

Interestingly, landscaping in rural areas adjacent to cities was also part of the biomass growth process. Probably, scientists believe, anthropogenic pressure on the environment has decreased there due to the closure of part of this land for agriculture.

However, the authors note that the current situation is temporary. Further losses of green biomass due to new urban development will be very low (after all, urbanization is largely completed), but the growth of tree biomass in cities in the future is doubtful. Trees grow rapidly in the first decades of their life, and then growth begins to slow down.