(ORDO NEWS) — The mysterious patch of the North Atlantic Ocean is fighting back the effects of climate change.

The “Blue Blob,” an unusually cold patch of water in the Arctic, has halved the rate at which Iceland’s glaciers are melting, but a new study reveals that the effects of climate change will catch up to the massive ice chunks if temperatures are not kept in check.

The Blue Blob is an undefined area of the North Atlantic Ocean located south of Iceland and Greenland. At its peak coldness, in 2015, the Blue Blob was 2.5 degrees Fahrenheit (1.4 degrees Celsius) colder than the surrounding waters.

Before the emergence of the Blue Blob, Iceland’s glaciers were losing a staggering 11 gigatons of ice every year due to melting. But since the cool patch emerged in 2011, that rate has more than halved to a slightly less worrying 5 gigatons a year ​​— even though the rest of the Arctic is warming four times faster than anywhere else on Earth, according to a statement from the American Geophysical Union.

In the new study, published online Jan. 24 in the journal Geophysical Research Letters, researchers used climate models to predict how long the Blue Blob could continue to slow the glaciers’ rampant melting.

They found that the rising temperatures will overcome the cooling effect and match rapid melting rates seen in nearby Greenland and the Norwegian archipelago Svalbard by the mid-2050s.

Researchers say this finding is important because it improves our understanding of trends throughout the Arctic. “It’s crucial to have an idea of the possible feedbacks in the Arctic, because it’s a region that is changing so fast,” lead author Brice Noël, a climate scientist at Utrecht University in the Netherlands, said in the statement. “It’s important to know what we can expect in a future warmer climate.” 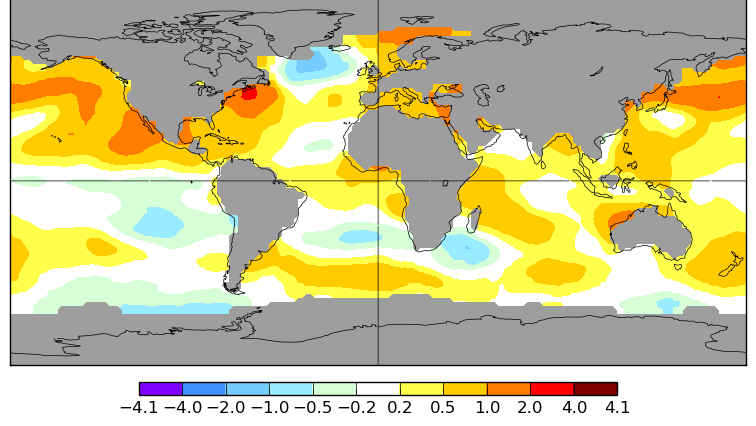 The ‘Blue Blob’ can be seen in this map (below Greenland and Iceland) showing the average sea surface temperature changes since 2020 (temperatures in degrees Celsius). (Image credit: Goddard Institute of Space Studies Surface Temperature Analysis (v4))

In total, the volume of ice on the island nation is estimated to be around 816 cubic miles (3,400 cubic km), which would be enough to raise global sea levels by 0.35 inches (9 millimeters) if it completely melted, the researchers wrote in the paper. This is the equivalent to around three times the current global sea rise we are experiencing every year, according to the Smithsonian Institute.

Almost all of Iceland’s glaciers terminate on land, meaning they do not come into contact with the sea. Therefore, the rate at which they melt is dependent on their surface mass balance, which is the difference between ice gained from winter snowfall and ice lost from meltwater runoff in the summer.

However, the Blue Blob is so cold that it decreases the temperature of the air that flows over it, which then cools the atmosphere surrounding Iceland and, in turn, reduces the surface mass balance of its ice masses, meaning less ice is lost.

Using the latest climate prediction models and local atmospheric temperature readings dating back to the 1990s, the team pinpointed when rising temperatures caused by climate change would outweigh the influence of the Blue Blob on Iceland’s surface mass balance. The researchers estimated that by 2100, a third of Iceland’s glaciers may be gone and that by 2300, there likely will be no glaciers left in the country. 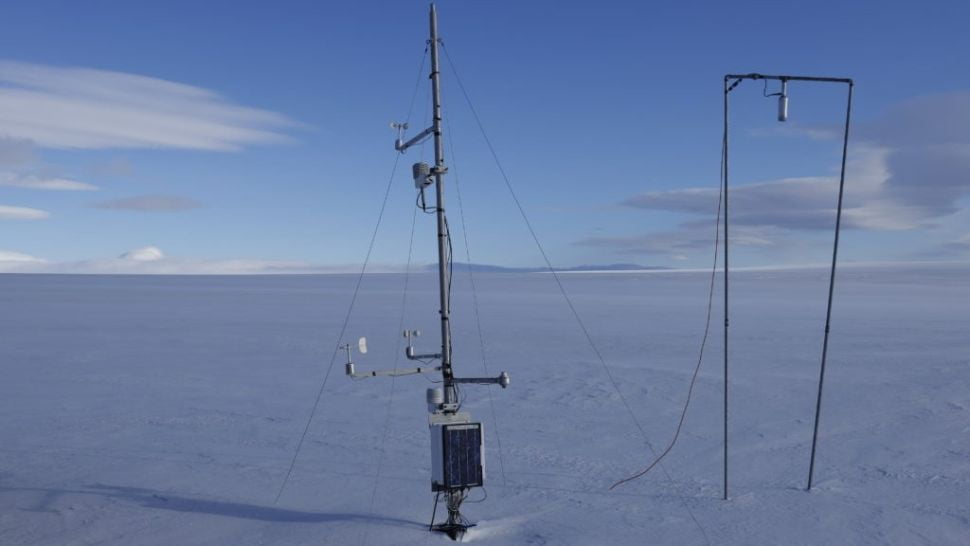 The researchers verified the results of their models using depth measurements from Iceland’s glaciers, collected by colleagues at the University of Iceland since the 1990s. (Image credit: Finnur Pálsson)

The researchers’ approach could be used to better understand the melting rates of glaciers in other places, such as the Himalayas and Patagonia, Fiamma Straneo, an oceanographer at the Scripps Institution of Oceanography in California who was not involved in the study, said in the statement.

Scientists are still unsure why the Blue Blob is so much colder than the surrounding waters. Some researchers think it is part of natural variability in sea-surface temperatures in the Arctic that has increased the amount of upwelling of cold water from the deep sea. Others think climate change has disrupted surface currents that push warmer water into the Arctic from tropical regions in the Atlantic.

Regardless of how the Blue Blob came to be, its cooling effect on Iceland will not last forever, and if left unchecked, climate change will cause the total disappearance of Iceland’s glaciers in the not-too-distant future.

“In the end, the message is still clear,” Noël said in the statement. “The Arctic is warming fast. If we wish to see glaciers in Iceland, then we have to curb the warming.”