(ORDO NEWS) — A strange creature that lived in the oceans of the Earth more than half a billion years ago, it seems to be the earliest relative of vertebrates that we have found to date.

They are called Yunnanosoans and date back to the early Cambrian about 518 million years ago. The cartilaginous features found in their fossils are comparable to modern vertebrates, paleontologists have discovered.

This suggests that the animals are stem vertebrates, an extinct sister group to the group from which modern vertebrates are descended.

“The pharyngeal arches are a key innovation that likely contributed to the evolution of the jaws and braincase of vertebrates,” writes a team led by Qingyi Tian of Nanjing University and the Chinese Academy of Sciences in China.

The pharyngeal skeleton of the controversial Cambrian animals called the Yunnanosoans may contain the oldest fossil evidence limiting the early evolution of arcs, but their relationship to vertebrate evolution is still debatable.”

“By examining additional samples using previously unexplored methods, we found evidence that the branching arches of yunnanosoans are composed of cellular cartilage with an extracellular matrix dominated by microfibrils, which has hitherto been thought to be characteristic of vertebrates.”

Tracing the evolution of vertebrates back to their nebulous origins has been a difficult task for scientists. Over hundreds of millions of years, traces of life are erased and destroyed; under favorable conditions fossils may remain, but they are often very difficult to interpret, especially very ancient and very strange ones.

The Yunnanosoans are very ancient and very strange. For decades, scientists have puzzled over where this creature occupies in the tree of life, based on research and competing interpretations of ancient fossils recovered from the Maotianshan Shale in China.

It was in hopes of clarifying this issue that Tian and his colleagues set about studying 127 recently collected Yunnanzoic fossils.

These fossils have been subjected to a range of techniques that have not previously been applied to the Yunnanzoans, including X-ray microtomography, scanning and transmission electron microscopy, Raman spectrometry, and element mapping using energy dispersive spectrometry. Their results revealed previously unknown details of the anatomy of the Yunnanozoans.

The pharyngeal arch is a structure found during the embryonic development of vertebrate organisms and is the precursor to a number of different parts of the face and jaw, depending on the organism.

In fish, these arches are known as branched arches, and they serve as support for the gills. Scientists believe that in the ancestors of vertebrates, the pharyngeal arch developed from an undivided cartilaginous shaft, although when and how it arose is unknown.

Seven pairs of bilaterally symmetrical branched arches have been previously found in Yunnanosoans. Tian and colleagues took a closer look at the microscopic structures of these arcs and how they are arranged in the body.

They found that the seven pairs of arches in the fossils are similar to each other, and that they are connected by dorsal and ventral horizontal rods, forming a basket-like structure.

They also found that the branched arches were made up of cartilage in a densely packed matrix of microfibrils.

These microfibrils, in their opinion, are similar to microfibrils found in the connective tissue of vertebrates.

This is a combination of features that are widely represented in modern vertebrates: cartilage in a matrix of microfibrils, branched arches, and the presence of horizontal bars at the ends of branched arches.

In addition, basket-like pharyngeal skeletons can be found in some modern jawless fish such as lampreys and hagfishes.

The team’s evidence strongly suggests that these enigmatic animals have vertebrate-like structures. Although not directly related to modern vertebrates, the Yunnanozoans may help shed light on vertebrate evolution.

“While evolutionary biologists are busy chasing a mythical ancestor that explains everything about the vertebrate body plan, perhaps the opposite approach is reasonable,” paleobiologist Tetsuto Miyashita of the Canadian Museum of Nature wrote in Science Perspective. Miyashita did not participate in the study.

In other words, “the meandering path to modern vertebrates can best be understood by filling in the family tree with divergent and discontinuous anatomical forms, guided by phylogenetic inference rather than theory.” 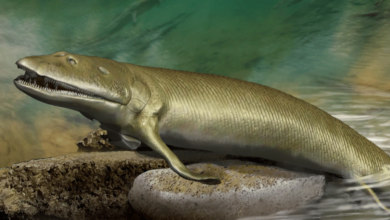