(ORDO NEWS) — Due to the coronavirus pandemic, people are forced to stay at home as much as possible. But this did not stop to note the fact that in 2020 UFOs began to appear much more often and many people recorded this on video and photos.

Former police officer Gary Heseltine says that the number of UFO sightings increased several times during the pandemic. The reason for this, he said, was that the number of flights decreased and due to the decrease in the volume of air traffic, the likelihood of seeing a UFO increased.

Previously, a special database was kept in which the police recorded cases of UFO sightings. Then there were about 550 cases in it, some of which were recorded back in 1901. Since 2009, the records have ceased to be kept, because it was at that time that the Ministry of Defense was closed on UFOs.

Heseltine believes that it is necessary to record all cases and maintain the base, but since the government does not consider UFOs to be a military threat, it is unlikely that it will do this.

Despite this, over the past year, a huge number of videos and photographs have been collected, which came from people who saw the UFO and managed to shoot it on camera. 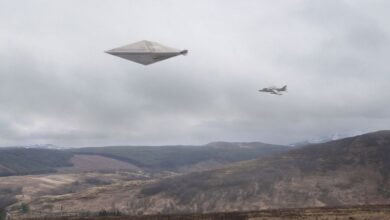