(ORDO NEWS) — Kamchatka is a land where the land shows its violent disposition. Volcanoes erupt there, geysers spout from the ground, and streams of poisonous gases come out here and there. In Death Valley near the Kikhpinych volcano, bears die in a matter of minutes, being poisoned by hydrogen cyanide.

But what is hidden in Lake Bolshoy Kalygir has nothing to do with the forces of nature.

In May 1938, geologist Igor Soloviev worked in Kamchatka, studying active volcanoes. One of the routes took Igor and his partner Nikolai Melnikov to the shore of the lake. Then it was marked on the map under a different name – Bolshoy Koliger.

Geologists did not find any trails, even trodden by animals. For some reason, animals bypassed the lake, although large fish splashed in the water. People had to walk along the coast to the waist in water, bypassing the hanging tops of the alder forest. The weather was sunny. The water has warmed up, causing a minimum of trouble.

– I saw a rock near which alder did not grow, – Soloviev recalled. “There was a cave in it. Thinking that it would be possible to dry off and rest there, I bent down and entered it. Looking up, he saw that the cave was flooded with water. In the depths, a rocky black island was visible, in the middle of which a bright blue-white glow spread. For about two minutes I watched, and when I heard Melnikov’s footsteps behind me and looked around, I plunged into darkness. I realized that I was blind. Falling into the water, he shouted heart-rendingly: “Nikolai! Help! I don’t see anything! ” Melnikov, taking me by the arms, dragged me to the exit. For more than a kilometer, waist-deep in water, he carried me on his shoulders. 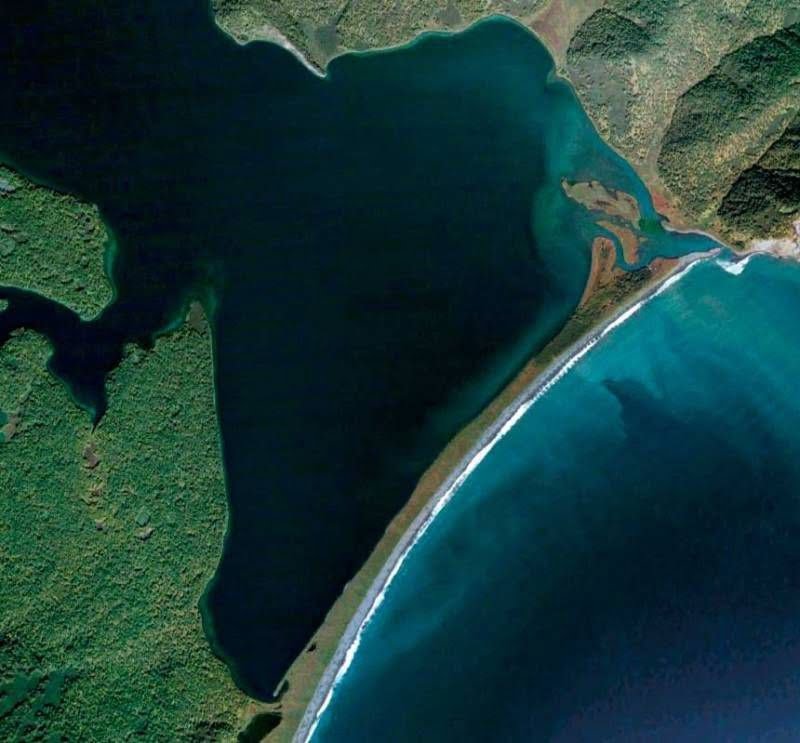 The unfortunate geologist lay on the shore for 10 hours before some jumping white, green and yellow spots began to flash before his eyes. After another hour, my vision began to gradually return. Nikolai also saw the glow, but not for long, just a couple of seconds. This saved him from temporary blindness.

In 1976, Soloviev decided to write about the incident with the blinding light in the journal “Technics – Youth”. The letter was published and generated a flood of responses from former Kamchatka residents.

It turned out that on the shore of the lake there was a fishing village Kalygir, built on the site of the Itelmen settlement of Kinnat. Long before the war he was abandoned.

The locals knew about the cave and were afraid to approach it. In the early 1920s, a small cavalry detachment from the remnants of Kolchak’s defeated army appeared there. The White Guards heard stories about the cave and decided that treasures were hidden there, and ominous rumors were spread by the Itelmens to discourage those who wanted to take the gold into their hands.

About the detachment that went in search, nothing was heard for several days. Then one of the White Guards appeared in the village, ragged and emaciated. The soldier was clearly not himself. He muttered something about “the fire in which the comrades were burnt.”

Blisters covered his face and hands. They tried to cure him, but a few days later the soldier died in terrible agony. Rather light burns could not cause death, the White Guard was killed by something else.

The first expedition to the lake was organized in 1980 by the Far Eastern Branch of the Russian Geographical Society. Its leader, Valery Dvuzhilny, found Solovyov and invited him to take part in the expedition. Soloviev refused the trip – the geographers could not solve the issue with the helicopter, and the trip to the waist in the water was not for a man of his age.

The five-person expedition set off on the Sovetsky Soyuz motor ship and arrived in Petropavlovsk-Kamchatsky on August 3. Only there it became clear that there was no permanent communication with the Kalygir region. The border guards sent the participants to the passing ship “Sinyagin”.

When the Sinyagin was already passing by the Kalygir Bay, the captain announced that he would not disembark anyone. They say the depths are too shallow here. Only after long arguments and a reminder about the order of the authorities, the captain lowered the boat.

His concern was justified: near the coast, the boat ran into a rock and broke through the bottom. The geographers had to jump into the water. Fortunately, there was a fishing house with a stove on the shore, marked on the map.

The scientists spent the first day in the hut, preparing food and checking the equipment. The next day, August 7, we set out on a route along the right bank of the lake. Soloviev knew what he was talking about: the bank was so overgrown with alder that it was only possible to walk knee-deep in water. People dragged a rubber boat loaded with a tent, sleeping bags and food on a rope. Valery now and then turned on the dosimeter, but it showed the usual background radiation.

Soon everyone realized that there could be no caves of natural origin here, except for small grottoes cut by waves. If the cave exists, then someone cut it down.

All along the shore lay a lot of dead fish with thorns in front of their eyes and swelling on their backs. Living fish barely fluttered in the water, staring with blind eyes. The seagulls did not try to peck at easy prey by staying away from the water.

What happened? It could not have been a release of poisonous gases: pink salmon, chum salmon and salmon calmly walked across the lake to spawn. The dosimeter showed only 25-30 microroentgens per hour. The fish was exterminated by some powerful short-term burst of energy, temporarily turning the lake bowl into a deadly trap.

– Evening was approaching, and we walked only one and a half kilometers, – Dvuzhilny recalled. “There was no point in going further in the dark. We set up a tent, prepared sleeping bags and began to prepare dinner. After eating, they sat by the fire, dried their clothes and shared their impressions of the day.

At 10 o’clock in the evening on the opposite bank there was a strong hum and thunder. He came from the bottom, not from the surface. A blue glow flashed and there was a strong splash, similar to the emergence of a huge body from under water. After a while, eight huge waves swooped down on our shore. The boat bounced several times on the waves.

It became clear: something huge jumped out from under the water, but what exactly? An inexplicable fear struck me of monstrous power. I wanted to rush up the mountain, run up. The fear was inexplicable, animal. With a great effort, we held ourselves in place and did not rush in any direction. After the body jumped from the bottom of the lake and disappeared, the fear quickly passed.

Then a yellow dot flashed over the water of the neighboring shore. After 2-3 seconds, a large blue hemisphere with a radius of about 30-50 meters appeared above it, rising above the tree crowns. This was repeated several times at intervals of five minutes.

First the yellow dot, then the blue hemisphere. The dots were not very bright. But the hemisphere seemed bright and dense. The shore was not visible through it. Cameras were at hand, but no one thought to take a picture. Then people made excuses that black and white Soviet film still could not capture an unprecedented sight.

Where the hemisphere appeared, the most dead fish were seen during the day. Perhaps there was some connection between the blinded stickleback and the flight of the body. You can hide anything in the lake 90 meters deep.

– We examined the place where the object approximately flew out from under the water, but did not see anything interesting, – Valery Viktorovich said. – The third day of going around the lake is over, and the results are zero. We carefully scanned the western bay of the lake through binoculars. There are steep mountain slopes and no signs of a cave. We were exhausted by the endless transitions, the products were coming to an end. Time was running out. We were to be taken aboard by a fishing seiner.

Scientists did not wait for Seiner. The geographers had to walk for three days through the taiga to Cape Zhupanov, where fishermen regularly visited.

The researchers prepared the expedition “Kalygir-81” much more thoroughly. At the disposal of the scientists were an inflatable raft with an engine, scuba gear, a portable compressor for filling cylinders and a whole barrel of gasoline.

For several days, the group walked around the entire perimeter of the lake on a raft with a motor, especially carefully examining the southern bay, but did not find the cave. Perhaps she disappeared under water after a powerful earthquake. The expedition, just in case, studied the neighboring lakes – Maly Kalygir, Bolshaya and Malaya Medvezhka, but even there they did not find even a hint of entry.

If the cave really went under water, the echolocation of the bottom and the coast can bring clarity. The echo sounder will not only find the entrance under water, but also check if there are any strange structures in the depths of the lake.

Scientists have solved the riddle of Beethoven’s metronome

Scientists have solved the riddle of Beethoven’s metronome