(ORDO NEWS) — It turns out that not one world famous ufologist Scott Waring can find in photographs sent from Mars by NASA rovers, almost any evidence of the presence of life there (in the past and even the present). Or at least the presence of aliens on the Red Planet.

Even if you run through foreign sites devoted to ufology, you will find a lot of interesting material, including those related to Mars. So, the other day on the blog Ufo Sighting Shotspot there was a note that an alien ship crashed on the Red Planet. And as evidence, photographs of UFO wreckage are shown (see photo). 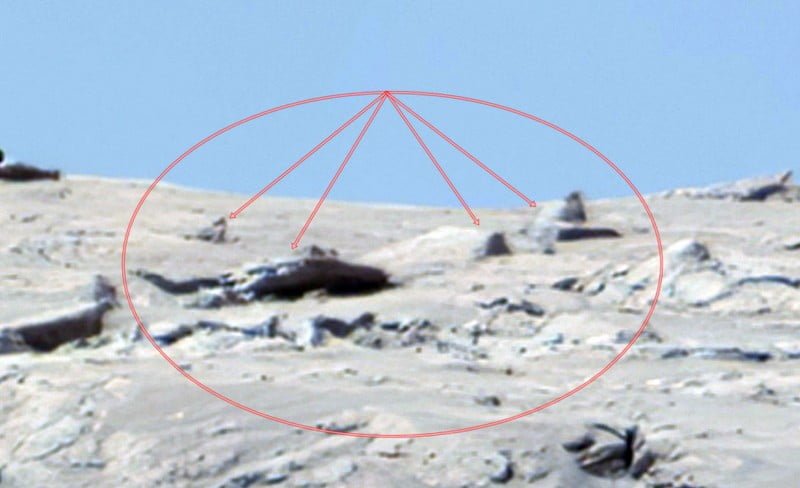 The blogger himself clarifies that he collected all these frames from Keith Laney’s gigapan page, showing the top of one of the mountain ranges of Mars. By the way, we note that gigapans are panoramic images of fantastic resolution – with billions of pixels. This allows you to examine and then isolate practically anything from such panoramic “giants”, as if you were wandering around a “photo field with a mine detector.”

This figurative expression is quite consistent with the search approach that blogger Ufo Sighting Shotspot used. He does not hide the fact that he corrected the images and, most importantly, removed the red “Martian color” that NASA employees paint such photos (probably because the planet is still Red).

As a result, the blogger came to the conclusion that he was able to find the wreckage of the crashed apparatus (ship) of aliens. What is the probability of such a catastrophe on Mars, judge (from the pictures, of course) for yourself.

All such finds of virtual archaeologists on the Red Planet can be divided into three groups: “clearly far-fetched”, “there is something in this” and “wow, it can’t be.” As a rule, NASA management sometimes only responds to materials suitable for the third group. And even then only in order to let off steam from the gullible inhabitants, but in no way with the aim of getting to the bottom of the truth. But the photographic findings of the third group are really striking and thought-provoking.

And to which group of Martian finds would you include the “UFO wreckage” provided by the bologer Ufo Sighting Shotspot?

And finally, remember that just over a year ago, the unforgettable Scott Waring also discovered a crashed alien ship on the Red Planet. And he even dedicated a video to this on the YouTube channel (see below). You can compare these findings. This is interesting as it gives food for some thought. And first of all it makes us think about the mysterious (or absurd, which is almost the same) world we live in …

One of the mysteries of methane on the Red Planet solved