(ORDO NEWS) — Guiyang “flying train” incident: At 3:00 am, residents and employees of a factory in a small village were awakened by a roar and strange light.

When they went outside, it turned out that the plant was seriously damaged, and the forest was destroyed for 3 kilometers and an area of ​​150-300 meters.

On December 1, 1994, 18 kilometers from the capital of China’s Guizhou Province, Guiyang City, there is a rural village and an area known as Duxi Forest Farm.

A man named Chen Lianyu and his friend were the first to return from their night watch, intending to rest and drink tea at their dorm. 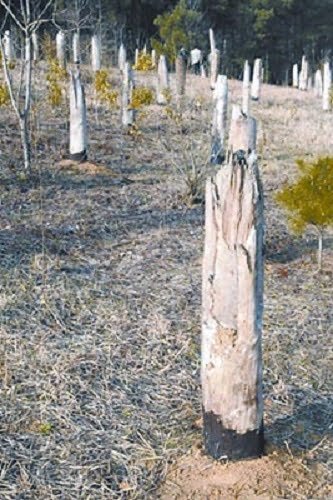 After tea, they tried to sleep, but were soon awakened by the sound of a freight train, which was strange, since the nearest railway station, Dulayin, was a considerable distance away.

The two were not alone: ​​all the villagers also heard the noise and went out of their houses to see where it was coming from.

Shortly thereafter, bright red and green lights suddenly appeared, so bright that it seemed to be daytime, as well as a sudden gust of wind and, according to some eyewitnesses, hail.

Some eyewitnesses even reported seeing fireballs. Several wooden houses even collapsed or were damaged.

Those who did not leave their homes to investigate reported that they could not open the doors until the sound and light had disappeared. 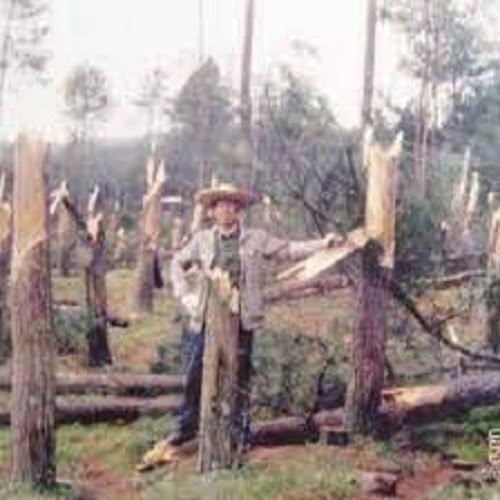 As soon as the sun rose that morning, the villagers went to explore and stumbled upon a painting that took their breath away. 400 hectares of forest and trees were destroyed: the trees were cut in half, uprooted and severely bent. Oddly enough, the greenhouse next to the trees remained untouched.

The Dulaing railway station and the factory were also damaged, with some brick buildings collapsing, roofs ripped off, steel pipes bent and broken, and the train’s 50-tonne carriages shifted 20 meters.

Despite the destruction, no one was hurt, and electricity and communications remained intact.

The radius of destruction in the end turned out to be in the form of a circle. Two guards were also blown into the air by the sudden gust of wind, but they were not hurt. 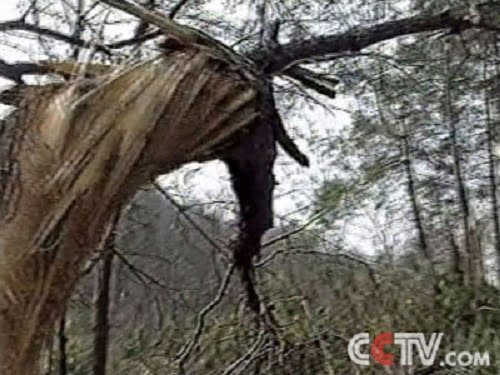 Arriving journalists and government officials tried to document and comprehend what had happened. In addition to the extensive destruction, other oddities were also noted, for example, one of the local newspaper journalists stated that photographs taken by him during the destruction did not develop.

Cameras were able to photograph the scene only a few days after the incident, while the clock of one of the factory workers suddenly fell behind by 15 minutes.

In terms of damage, a large number of trees were broken at a certain height of 1 meter, and the damage was not neat or even. The damage was also selective, as there was no damage between the forest and the railway station. 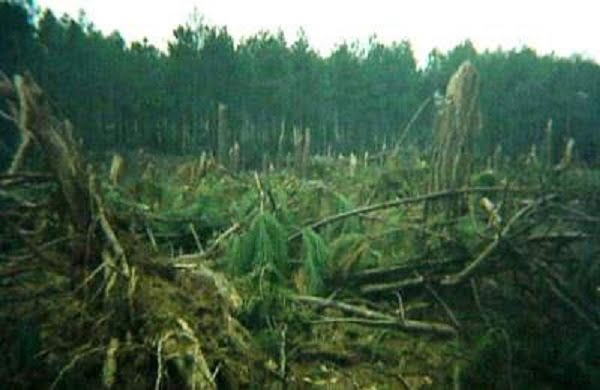 The incident became a sensation, leading to debate as to what natural explanation could have been the cause, or whether it was natural at all, as the incident has been cited as one of China’s most famous UFO incidents.

To begin with, according to radar data, there were no military or civilian aircraft flying over the area at the time, and even if there were, it would not provide an instant explanation. 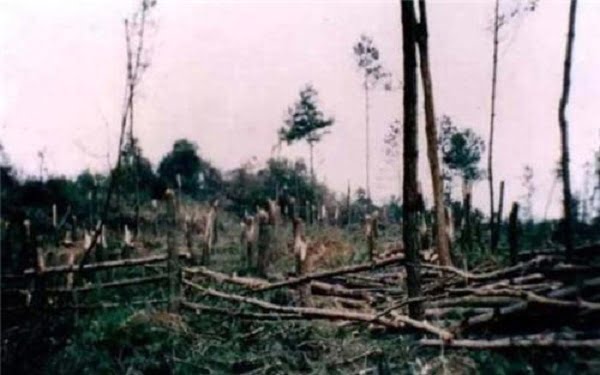 Weather events were soon named as the most likely suspects by those who believed the event had a natural explanation.

The first theory was a downpour, which would explain some eyewitness accounts of hail, the destruction left behind, and that some eyewitnesses were unable to open the doors of their houses. 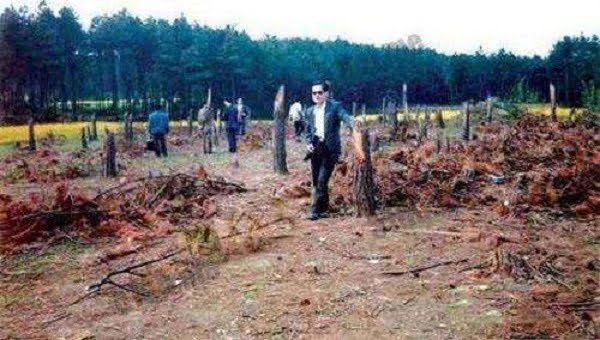 A tornado was also considered a possibility, but according to meteorological data, no tornadoes were recorded that night or at all in Guizhou province, and conditions in Guiyang were not conducive to a tornado, but this does not mean that a tornado cannot form, and lightning and, perhaps even fireballs that occurred at the same time as the tornado could also explain the appearance of light.

Regarding the weather before and during the incident, on November 30, 1994, there was a severe thunderstorm in the area, accompanied by rain, lightning and hail.

This theory has been challenged for the following reasons, mainly because the damage pattern could not have occurred naturally. 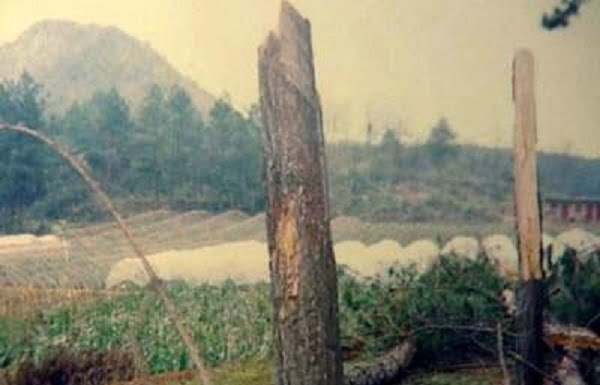 As an alternative natural explanation, it has been suggested that a meteor could be the cause.

Although the meteorite would explain the light and noise, it would not explain the pattern of damage and the damage itself, as the entire forest would be razed to the ground. 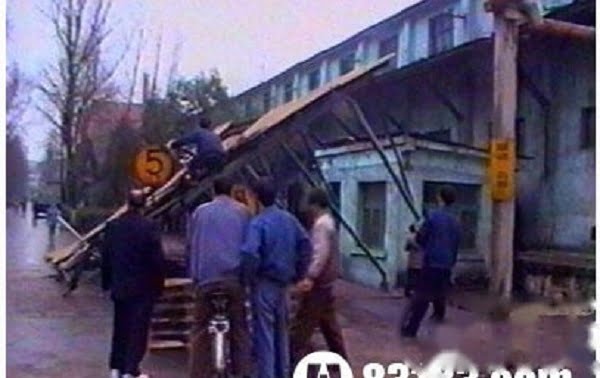 What do those who believe in the theory of UFOs or other unnatural phenomena say?

Based on video and photographs of the destruction field, they determined that the UFO was 200 meters in diameter and its propulsion system or the field that surrounded it caused all the destruction that was recorded.

To explain the scattered damage, it has been argued that bad weather may have interfered with his work when he lost power and was forced to restart his power plant, which caused the damage, and also explained the lack of damage between the forest and the factory/railway station.

This theory is also called into question due to the lack of burn marks and burning on the ground or leaves. 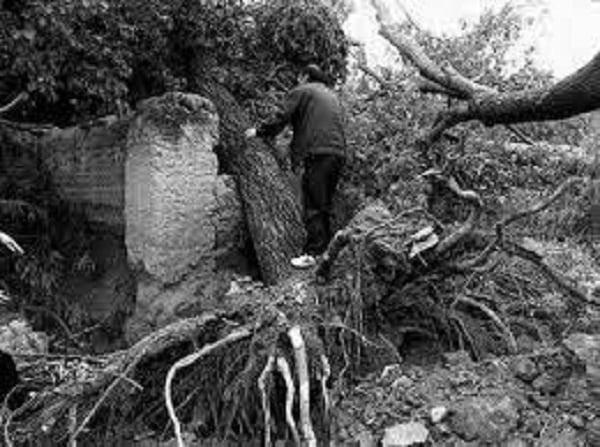 This event was regularly returned and investigated, especially in the 2000s, but a satisfactory explanation of the incident was not given even by officials, as a result of which the cause of the destruction remained undisclosed. The scene has since been cleared and all traces of destruction removed.