(ORDO NEWS) — An iron blade with a golden handle came to Egypt from the north. Scientists managed to establish not only this, but even what type of meteorite it was made from.

When, in 1922, the English archaeologist Howard Carter unearthed the virtually intact tomb of Pharaoh Tutankhamen in the Valley of the Kings, it became a sensation. Egyptology immediately became fashionable and enjoyed constant success with the public.

Among the obviously significant discoveries made in the tomb is the discovery of a dagger with an iron blade. The fact is that Tutankhamun, the pharaoh of the XVIII dynasty, ruled in the XIV century BC (historians do not have a single point of view regarding the exact dating of his reign), in the Late Bronze Age.

And the Iron Age in Egypt, according to today’s ideas, came after 1200 BC – although mass finds of objects made of iron occur much later, from about the 10th century BC. In other words, during the life of Tutankhamun, people had not yet learned how to heat iron ore to a temperature sufficient to smelt this metal. 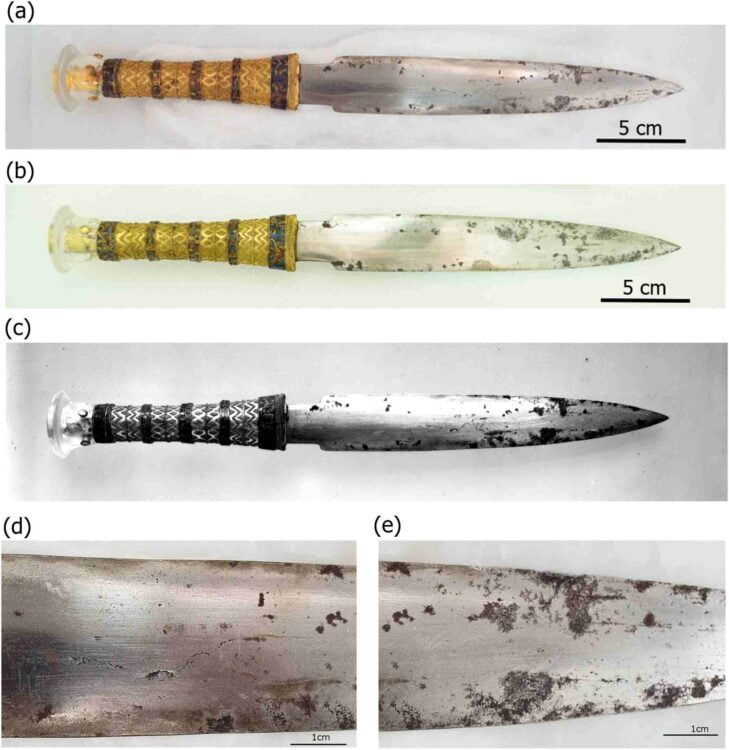 The oldest such dagger was found in a burial in the Neolithic settlement of Aladzha-Hyuyuk , on the territory of modern Turkey. This dagger belongs to the Early Bronze Age, around 2300 BC.

Such an early find suggests that the technology of processing (forging) meteoric iron to make complex objects existed at least 4,300 years ago. Unlike the artifact from Aladzha Huyuk, Tutankhamun’s dagger is well preserved and therefore suitable for research.

A team of scientists from Egypt and Japan studied the blade of a dagger using non-destructive X-rays. The researchers found in the composition of the blade metal quite expected (that is, characteristic of meteoric iron) impurities: manganese and nickel. It also contained other chemical elements: sulfur, zinc and chlorine.

Scientists have compiled a kind of chemical map of the blade, indicating exactly where certain elements are present. As a result, the arrangement of nickel and sulfur revealed a pattern of broken lines, which the authors describe as “cubic symmetry”.

We are talking about the so-called Widmanstetten structure – a kind of metallographic structure, which is characterized by a geometrically correct arrangement of elements. They occur because at low temperatures (in space) metals cannot mix.

Such structures are characteristic of octahedrites , the most common type of iron meteorites. Obviously, the blade is made from such a heavenly wanderer. Sulfur-rich black spots randomly distributed on the surface of the blade are likely the remains of inclusions of troilite (iron monosulfide) in the original meteorite.

The preserved Widmanstätten structure and the remains of troilite inclusions show that the iron was not subjected to high-temperature treatment, or rather, it was not heated above 950 °C.

However, the exact way it is processed remains unclear. It is possible that the ancient craftsmen cut meteoric iron and then polished it, but it is likely that low-temperature heating and subsequent forging took place. 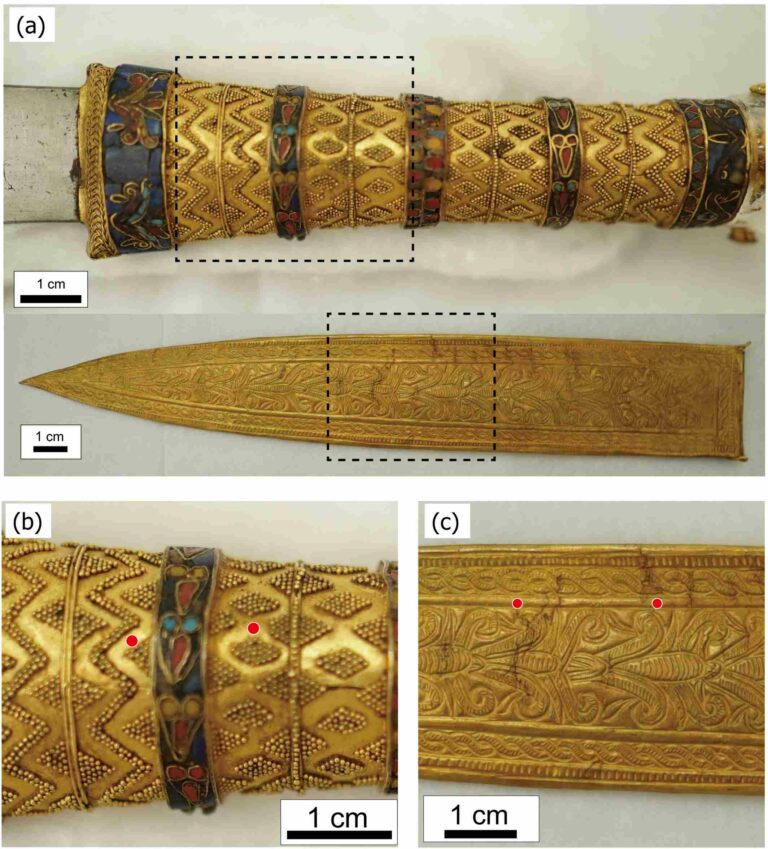 One more detail is curious. An analysis of the golden handle of the dagger showed that lime plaster was used in its manufacture – it was used to fasten jewelry.

However, all previously made finds indicate that such gypsum in Egypt began to be used a thousand years later, already under the Ptolemies (323-30 BC).

To unlock this secret, scholars turned to tablets from the Amarna archives. The Amarna Archive is a collection of mainly diplomatic correspondence of the pharaohs with the kings of other major powers such as Assyria, Mitanni, Babylonia.

One of the letters (on a clay tablet) says that the king of Mitanni presented an iron dagger with a golden handle to Pharaoh Amenhotep III, Tutankhamun’s grandfather. So it is likely that the material for the blade was found in the kingdom of Mitanni, on the territory of modern Syria.