(ORDO NEWS) — US President Joe Biden will lead the country to hell. This statement was made by former US leader Donald Trump.

Biden, finishing his speech in the city of Seattle, again extended his hand for a handshake to nowhere. A similar episode happened a week ago.

After finishing his speech in the state of North Carolina on infrastructure reform, he turned his back on the stage and held out his hand for a handshake, although there was no one near the president.

There has never been anything like this,” Trump said at a supporter rally in Delaware County, Ohio.

The reason for what is happening, according to Trump, is the current American leader. “Unfortunately, we have a president who has absolutely no idea what’s going on.

He shakes hands with the air, walks around confused,” Trump said, probably referring to two recent episodes when Biden, closing events, held out his hand, as for shaking hands when there was no one in front of him.

According to him, recently the head of state has been demonstrating not entirely adequate behavior. He noted that in the current environment, when there is a risk of a full-scale conflict with Russia, the American leader must be clearly aware of what is happening.

Biden was repeatedly recommended to be examined: in early February, when the president insulted a journalist, almost 40 Republican congressmen sent a letter with such a request.

In June last year, Jackson, along with 13 members of the House of Representatives, also urged the president not to delay the test for cognitive abilities, arguing that the brain dysfunction and forgetfulness of the American leader became more noticeable. 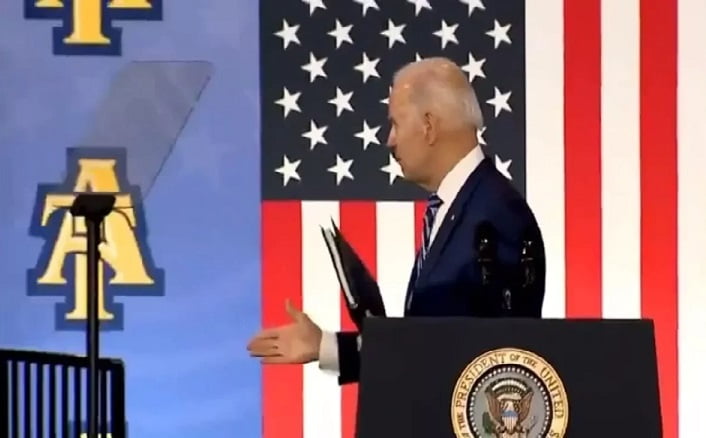 The head of Chechnya, Ramzan Kadyrov, drew attention to Biden’s strange behavior and offered White House employees several options for shaking hands with the US president.

“If you see Biden saying hello to ghosts for the second time or trying to shake hands with the air, put some humanoid cyborg robot or a trained monkey – orangutan or chimpanzee there.

So that the audience thinks that this is exactly what was intended. Or a large photograph Put Zelensky in height, or bring a living Zelensky and put him next to the podium,” Kadyrov wrote on his Telegram channel.

At the end of March, NBC News published the results of a poll, according to which 53 percent of Americans believe that the country will begin a long-term recession, which will lead to the loss of American leadership in the world.

When answering the question about Biden’s ability to correctly respond to the situation around Ukraine, only 12 percent of respondents expressed complete confidence in the actions of the head of administration.

CNN, in turn, reported that the confidence rating of US President Joe Biden has reached a record low. According to a generalized analysis of polls published by four organizations last week, the level of confidence in the US president is about 41%, and according to one of them – only 33%. This is a record low compared to all of Biden’s predecessors in the same period of the presidential term.