(ORDO NEWS) — It had fierce tail spikes, giant backplates and a tiny head. The remains of a newly discovered stegosaur with huge backplates, long tail spikes and a teensy head belong to one of the oldest dinosaurs of its kind on record, a new study finds.

The armored dinosaur, a newfound species called Bashanosaurus primitivus, lived during the Middle Jurassic period (174.1 million to 163.5 million years ago) in what is now China. As one of the oldest stegosaurs on record, its discovery adds more evidence that these plant-eating dinosaurs possibly originated in Asia, the researchers said.

“Bashanosaurus primitivus is one of the earliest records of Stegosauria in the world so far,” study co-lead researcher Ning Li, a scientist at the Chongqing Laboratory of Geoheritage Protection and Research in China, told Live Science in an email.

The discovery of B. primitivus’ remains began in 2015, when a shepherd named Zheng Zhou found a bone-like stone in Chongqing, in southeast China. He told Li’s lab, which confirmed that the “stone” was actually a dinosaur fossil.

After excavating the site at Laojun Village for two years, Li and his colleagues found a remarkable mishmashed assortment of dinosaur bones — about 5,000 in all — that included the fossils belonging to the newly described stegosaur. 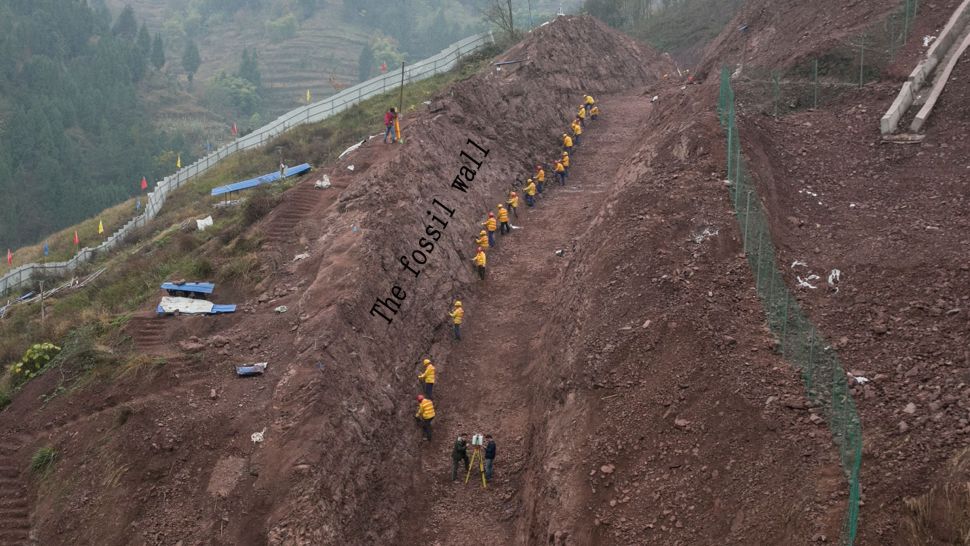 A part of the fossil wall that paleontologists excavated in Laojun Village, China

The team named the 168 million-year-old herbivorous beast Bashanosaurus for “Bashan,” the ancient name of Chongqing, and primitivus, which is Latin for “first.” During its lifetime, B. primitivus measured more than 9 feet (2.8 meters) long from snout to tail. This is a little smaller than later stegosaurs, Hunt-Foster noted.

Based on an analysis of the sediments where B. primitivus was found, the team determined that the stegosaur lived in a delta by a shallow lake during a hot drought, Li said.

The ancient beast joins a growing number of known stegosaurs. These dinosaurs, of which there are 14 known species, lived on every continent except Antarctica and Australia. The new species has a few differences from its relatives — including the bases of its armor plates, which are thicker and curve outward, unlike the plates on the backs of its later relatives, Li said.

“Bashanosaurus can be distinguished from other Middle Jurassic stegosaurs, and clearly is a new species,” Li said. “However, it does have similarities with some of the first armored dinosaurs, which are over 20 million years older.” 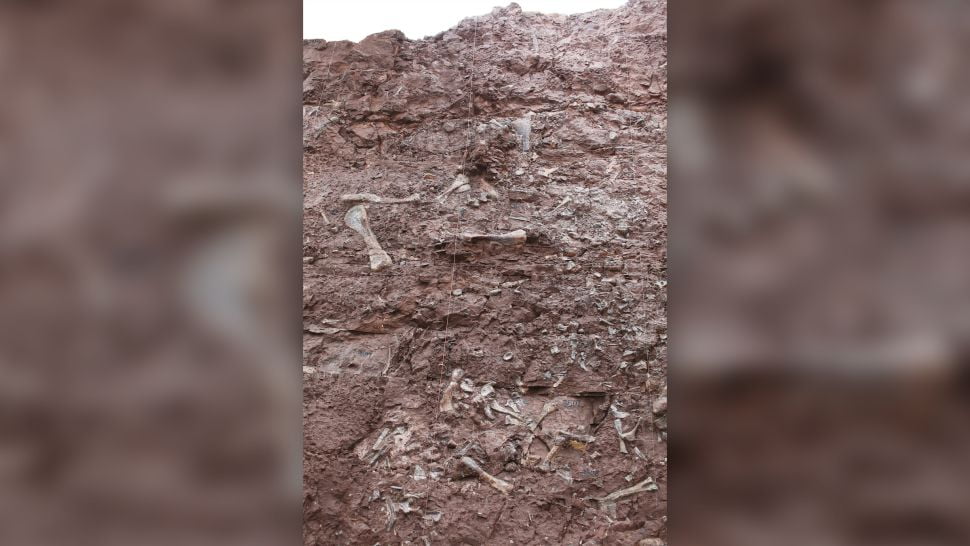 A smattering of the fossils that paleontologists excavated at the site in Laojun Village, China

The other earliest known stegosaurs, Chungkingosaurus (Chongqing “lizard”) and Huayangosaurus (Huayang “lizard”), are also from the Middle to Late Jurassic Shaximiao Formation in China, which Li said may hint that stegosaurs originated in Asia.

The new spiky dinosaur “is a pretty critical animal for figuring out stegosaur evolution,” said Andrew Farke, the director of the Raymond M. Alf Museum of Paleontology in Claremont, California, who was not involved with the new study.

“Even though this group is so iconic, we still have a ton to learn about their initial evolution.” By studying B. primitivus, scientists can learn how early stegosaurs did — or didn’t — resemble their better-known descendants, he added.

As for whether stegosaurs originated in Asia, that’s still up in the air. “There is also an early stegosaur of about the same age known from South America, so I suspect that the global picture may have been pretty complicated,” Farke told Live Science in an email. “We just don’t have the fossils yet.”