(ORDO NEWS) — The presence of unusually energetic gamma rays seen in some intense gamma-ray burst (GRB) afterglows can be explained with a new mathematical model developed by RIKEN researchers. This discovery may help shed light on the origin of GRB.

GRB is a spectacular eruption of energy resulting from violent events such as the explosive death of a massive star or the collision of two neutron stars.

The GRB also ejects a jet of matter and energy into the material surrounding the star, jarring particles such as protons and electrons and causing them to emit radiation. The emitted photons, ranging from radio waves to gamma rays, can be detected from Earth as a GRB afterglow.

The vast majority of GRB observations can be explained using existing theories, which should not be surprising: they would not be existing theories if they did not correspond to reality. But the afterglows of two recent GRBs produced unusually high-energy gamma rays that cast doubt on these theories.

“The surprise of these two bursts was that we had never detected photons of this energy before,” says Donald Warren of the RIKEN Interdisciplinary Program in Theoretical and Mathematical Sciences (iTHEMS).

To explain the unusual gamma radiation, the researchers compared two theoretical afterglow models. The first was based on the traditional theory that the distribution of energy between shock wave electrons follows a fairly simple curve known as the power law.

In this scenario, most of the electrons have relatively low energies, and only a few have the highest energies. However, it is important to maintain a sense of perspective. “Even low-energy electrons here would be the kings of the energy pile in the solar system,” comments Warren.

The second model added so-called thermal electrons to the mixture. They have a different energy distribution, which is similar to how molecules in a hot gas distribute their energy.

The second model has more electrons at the right energy to generate the high-energy gamma radiation seen in the afterglow of two high-energy GRBs. “The most important finding in the paper is that thermal electrons greatly increase the emission you get at the highest photon energies,” says Warren.

This means that the second model potentially offers a better description of the afterglow of these GRBs.

“The next step is to use this new model to evaluate the parameters of several GRBs to make sure it fits the observations at least as well as the current model,” says Warren. This could ultimately help astronomers refine their theories about how GRBs themselves happen.” 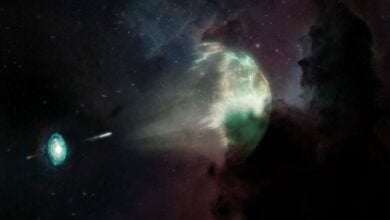 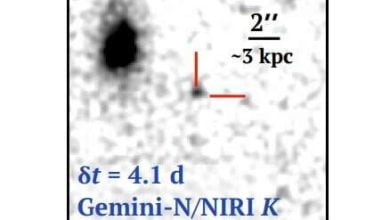