(ORDO NEWS) — There are many reports in history that support the theory that the US government entered into a secret deal with the Grays.

The exact date is unclear, but most sources indicate that the agreement was struck on February 20, 1954. At the time, a group of gray aliens landed at Edwards Air Force Base with the sole purpose of meeting and negotiating with Dwight D. Eisenhower, the President of the United States at the time.

Subsequently, this deal was called the Edward Agreement, or, as it is also called, the “Tau IX Treaty for the Preservation of Humanity.”

As a result of the discussions, an agreement was reached that seemed very beneficial to all participants. Unfortunately, for the rest of the world, the consequences would be catastrophic. The agreement stipulated that the US government would allow the kidnapping of people on a regular basis, and the Grays solemnly promised that they would return them safe and sound, and only after their memory was erased.

But as any kidnapped person can attest, this is not the case. More often than not, those abducted by aliens remember this incident in all its horrific details.

In exchange for providing humans as guinea pigs, the government got its hands on advanced alien technology. Another “clause of the treaty” was the exchange of ambassadors from both sides. It is unknown how many people participated in this exchange program, but the most famous are Krill, a reptile from the constellation Draco, and J-Rod, a gray from Zeta Reticulum.

The Edwardian Agreement culminated in a chain of events that began in 1947 when the wreckage of an alien spacecraft was found near Roswell, New Mexico. Several alien bodies were found inside the debris. This incident undoubtedly attracted public attention to the extraterrestrial phenomenon and probably laid the foundation for modern ufology.

In 1949, another UFO crash occurred in New Mexico, but this time one of the aliens on board survived. He was nicknamed EBE, which means “extraterrestrial biological creature”, and the information he provided allowed the US government to establish contact with his people.

In 1951, the Grays were contacted using a device created from drawings provided by EBE. A year later, extraterrestrial communication was established, which paved the way for the conclusion of the 1954 treaty.

On the night of February 20-21, 1954, President Dwight D. Eisenhower went missing while on vacation in Palm Springs, California. It is believed that he was secretly taken to nearby Edwards Air Force Base to meet with the gray aliens. His official statement was that he needed urgent dental treatment, and he visited a local dentist.

While the meeting did go according to plan, there were some unintended consequences. The landing was kept under wraps to see how humans would react when faced with a technologically advanced alien race. The hundreds of soldiers present at Edwards Base during the first contact received no instruction prior to the event; they were an unsuspecting test audience. 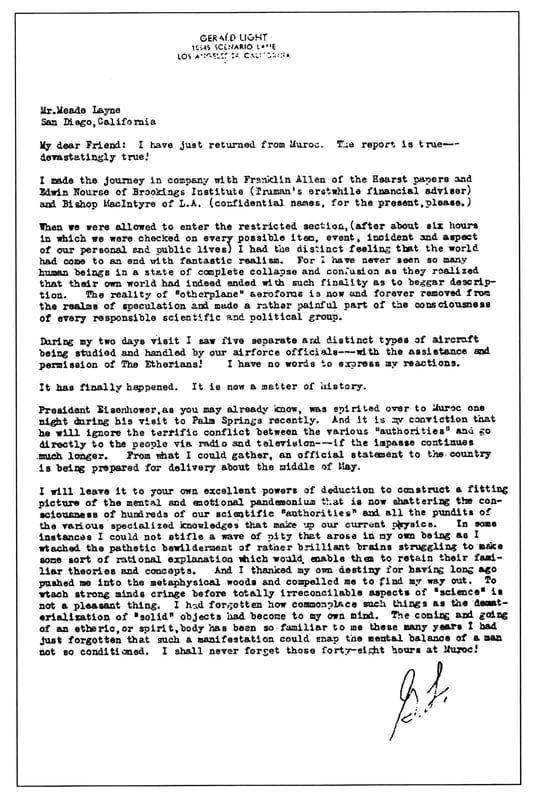 This approach subsequently proved disastrous, as a large percentage of those present began to suffer from various psychological illnesses, ranging from dysfunctional behavior to psychosis, deliberate intent and suicide.

Over the years, several confessions have been received from people claiming that they were direct witnesses of this event. One of them was Gerald Light, the then famous leader of the metaphysical community. Light says his involvement was in assessing the impact this breakthrough would have on the general public.

“My dear friends: I have just returned from Murok [Edwards Air Force Base]. The report is true – devastatingly true! During my two-day visit, I saw five separate and different types of alien aircraft that were being studied by our Air Force – with the help and permission of the Aetherians ! I have no words to express my reaction. Finally it happened. Now it’s a matter of history, “- wrote Light.

Several other important figures were present at the meeting, Light said. Among them was Eisenhower’s chief economic adviser, Dr. Edwin Nurse. He was invited to offer his expert opinions on the potential economic consequences of first contact with intelligent alien life. Light also said there were several trustworthy religious leaders attending the event, whose role is obvious.

According to former naval intelligence officer William Cooper, large objects were discovered moving towards Earth in 1953. At first it was believed that these were asteroids, but later it was established that these are spaceships. Two different missions, Project Sigma and Project Plato, managed to establish contact with aliens using binary code.

Cooper distinguishes two alien races – the Nordics, friendly towards humanity, and the grays, who had other plans. According to him, the Nordics helped negotiate a non-aggression pact between humanity and the grays. The Nordics offered not technology, but the possibility of spiritual development.

The agreement stipulated that aliens would not interfere in our affairs, just as we would not interfere in their affairs. Their presence on Earth will be kept secret. They could regularly kidnap people for medical purposes and development, provided that they did not harm them. After that, the people were returned to the place of abduction, and they did not remember anything about this event.

Their demands were for the people to dismantle and destroy their arsenal of nuclear weapons. They warned humanity about its path of self-destruction and condemned the fact that we are killing each other, polluting the planet and wasting the natural resources of the Earth.

The committee met their demands with extreme suspicion and prejudice, believing that nuclear disarmament was not in the interests of the United States and that it would leave the world helpless in the face of an alien threat. Eisenhower rejected their offer.

Another witness of these meetings was John Lear, son of the creator of the Lear jet, William Lear. According to him, the Nordics offered to help eliminate the threat from the Grays, but President Eisenhower refused because they did not offer any technology.

A “photon avalanche” was observed in nanoparticles for the first time

A “photon avalanche” was observed in nanoparticles for the first time