US, WASHINGTON (ORDO NEWS) — Strange things are happening on our star: each time scientists register more and more black spots, the size of which is comparable to the Earth. Scientists have studied the formations and talked about the danger they pose.

Recently, a new group of sunspots AD No. 2779 appeared on the Sun near the previous one. Not only do objects appear like mushrooms after rain, but they also expand. And this is happening rapidly: for several hours of observation, scientists have recorded some expansion.

The black area No. 2778 tends to decrease, while the second, No. 2779, on the contrary, covers more and more area. The processes observed on the Sun can pose a threat to the Earth. Thus, the first group of sunspots has a non-standard deltoid structure. As a result, she is able to create a real fountain of incandescent plasma and solar radiation. If this happens, then the substances will go to our planet. 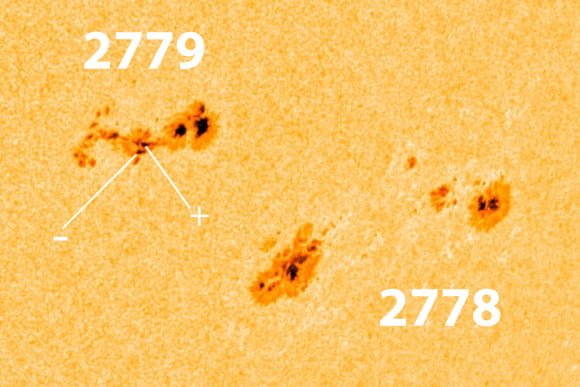 Astrophysicists have reported several outbreaks that have occurred, but they were weak. The situation can get worse at any time. Two groups of huge spots “look” towards the Earth. The streams of solar matter can cause powerful geomagnetic storms, from which absolutely all people on the globe will begin to suffer more or less.

A coronal ejection has already occurred on the luminary, which will partially hook our planet. It will happen on the first of November. So far, the situation has remained calm. What will happen next is a mystery.