(ORDO NEWS) — A galaxy is a huge system of stars, planets, gas and dust that are gravitationally bound to each other. Our solar system, for example, is part of the Milky Way galaxy, which is believed to contain over 100 billion other stars. Overall, researchers believe there are more than two trillion galaxies in the universe. However, most galaxies fall under well-defined classifications and have either a spiral shape, like the Milky Way, or an elliptical or irregular shape. But in the vastness of the infinite Universe, there are galaxies that do not lend themselves to classification. While some strange and bizarre galaxies are the result of gravitational interactions with other more massive and sometimes less massive objects, they have one thing in common: they are more like an artist’s fantasy than real ones. tangible collections of billions of stars. Introducing the strangest galaxies known to mankind today. 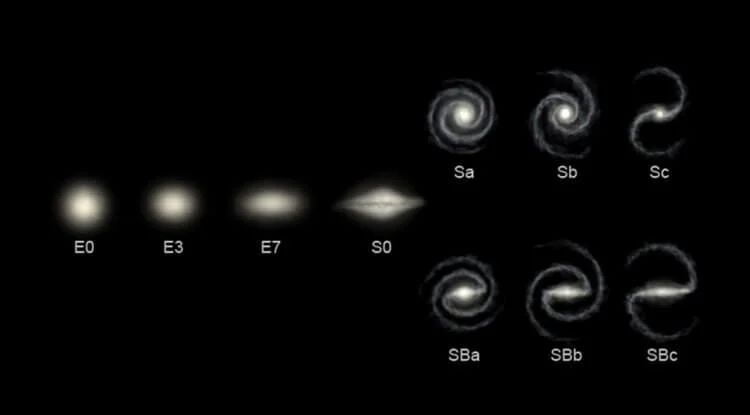 The first step to understanding many different phenomena can often be their classification. To this end, the eminent astronomer Edwin Hubble studied a large sample of galaxy images in the 1920s and classified them according to their characteristics. In his work, Hubble proposed to classify galaxies into three main types: elliptical, spiral and irregular. Astronomers today use a sequence developed by Hubble to classify different galaxies to help them accurately study individual galaxies. 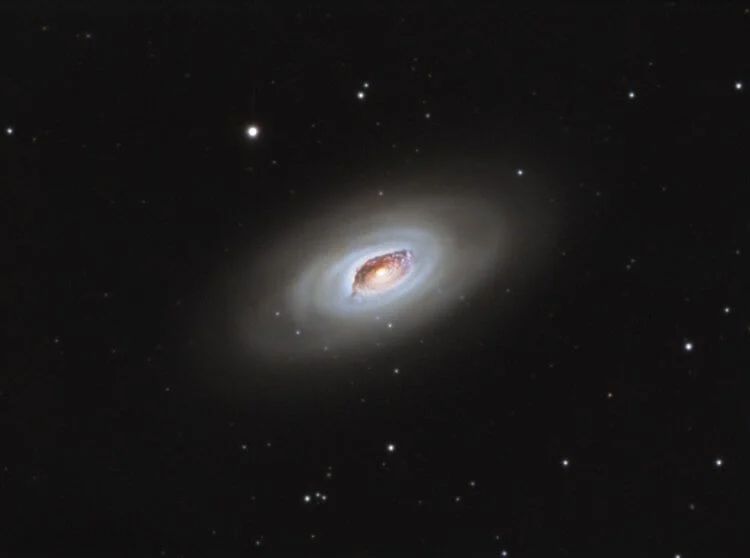 Despite the myriad of colorful and bright galaxies in the Universe, M64 stands out from their background, reminiscent of the bright covers of science fiction magazines in the 1950s. Stars in this galaxy are forming in huge numbers, as evidenced by the red light in the Hubble Space Telescope image above. But what is really strange is that M64 consists of two galaxies stuck together with different directions of rotation. The interior of the system rotates one way, while the stars and dust in the outer parts (about 40,000 light years away) rotate the other way.

Messier 64’s conspicuous dark structure is a conspicuous dusty feature of the galaxy, hiding the stars behind. 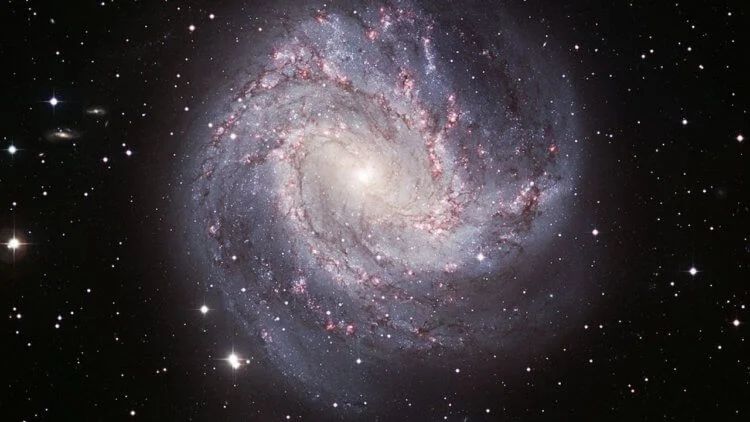 There are many beautiful galaxies in the universe, but this one, also known as Messier 83, stands alone. The peculiarity of this galaxy is the large number of supernova explosions. Eight active supernovae are currently under observation, but the remains of hundreds more have been noted. The reasons for the large number of supernovae are still unknown, but what is understandable is the huge number of active regions of star formation, which are shown in the image in pink. The pink color is the result of the tremendous amount of ultraviolet light generated by millions of young, new stars impacting the surrounding clouds of gas and dust. The beauty. 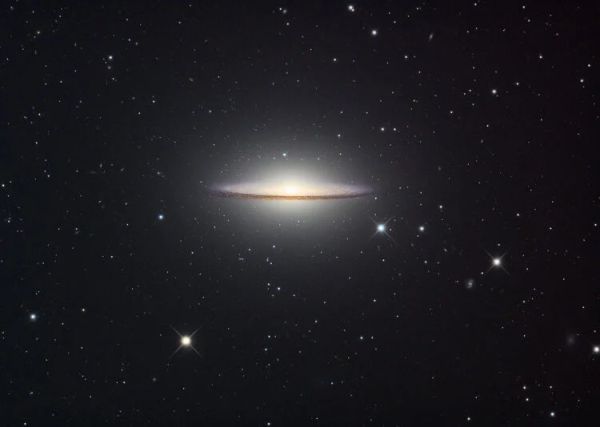 Discovered in 1781, the Sombrero Galaxy gets its name from the protruding central portion and ridge of dark dusty matter. Usually the center or core of a galaxy consists of one homogeneous set of stars, however, in the case of M104, the core consists of several clearly separated clusters of stars, although this is not so easy to see in optical light. For many years, astronomers have found it difficult to explain the presence of a dust strip surrounding the core. That changed in February 2020 when a team of astronomers led by Paul Goudfrooij analyzed observational data from the Hubble Space Telescope. The results showed that the galaxy M104 was formed as a result of a powerful collision of large galaxies. Scientists came to this conclusion by measuring the metallicity of halo stars, 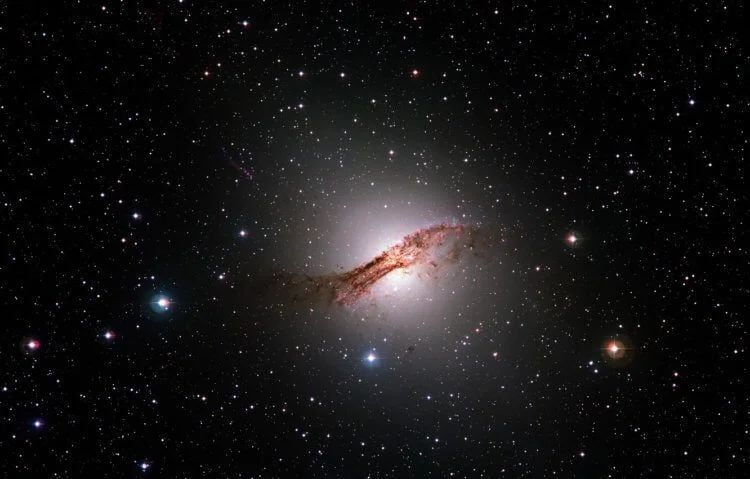 Galaxy Centaurus A, as seen in the photo above, is strange. In optical light, NGC 5128 looks like a huge elliptical galaxy, but the really strange thing is that at higher frequencies, a deeply hidden spiral becomes visible. The spiral component is currently thought to be the remnants of a spiral galaxy that was once consumed by a larger, more massive elliptical galaxy. However, it is highly unlikely that this interaction would have left the spiral intact or even recognizable. The above image clearly shows the preserved spiral structure of NGC 5128. 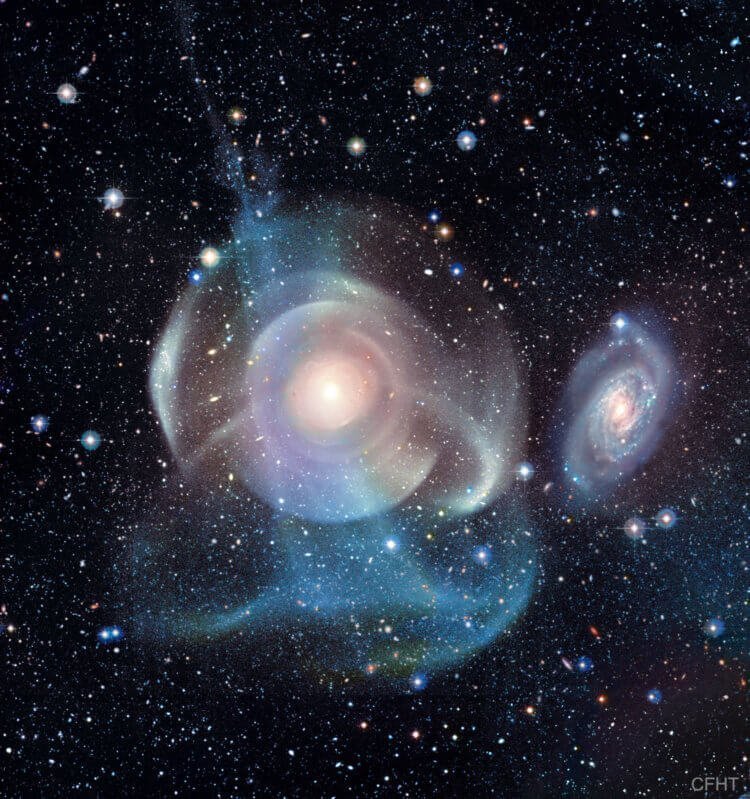 If the Southern Wheel Galaxy looks like what active galaxies should look like, then NGC474 is exactly what elliptical galaxies should not look like. The picture in front of you is not the impression of an artist after reading a science fiction novel, but a real-life galaxy, which is torn apart by the tidal influences of a spiral galaxy behind and above it. However, it is precisely because of the rarefied shells of gas and dust that give this galaxy the appearance of a jellyfish that we know that many, if not most of the known galaxies have similar shells of gas around them. The researchers believe this is a direct result of collisions with other galaxies in the (cosmologically speaking) recent past.