US, WASHINGTON (ORDO NEWS) — Aldoinho-Lengai volcano in the north of modern Tanzania is one of the youngest and most active in all of Africa. Over the past hundreds of thousands of years, from time to time he has been throwing ash around the neighborhood and pouring them with lava. Cooling and mixing with water, they form a viscous dirt, which then petrifies, permanently retaining any accidentally left marks.

The surroundings of the volcano – now the Tanzanian Ngorongoro Conservation Area is located here – are inhabited by people from the most distant eras. It is not surprising that from time to time under a layer of later sedimentary rocks it is possible to find frozen traces left by the Paleolithic people and even more distant anthropomorphic ancestors. In this series, one can recall the footprints of ancient Australopithecus found near the local village of Letoli and dated to the age of 3.7 million years.

And in 2008, another important site was found near the neighboring village of Engare Sero, which retained a record number of tracks. When the excavation was completed, in a space of no more than a tennis court, scientists counted over 400 petrified prints of bare feet. A new, detailed analysis of these tracks was conducted by Kevin Hatala of Chatham University and his colleague. Their article is published in the journal Scientific Reports . 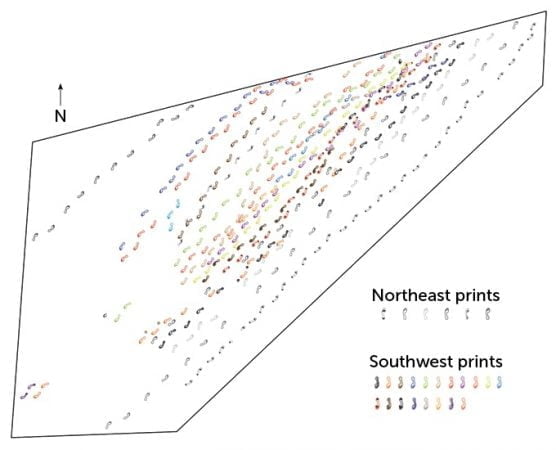 In total, 408 petrified traces dating from 10-12 thousand years old were found in Engar Sero. Anthropologists traced many of them in whole chains, determining who and how could leave these prints. So, 17 chains of tracks were associated with a slowly moving group of 14 adult women, two men and one boy. The authors suggest that this group was engaged in gathering.

In early and traditional human communities, it was a “team” and, as a rule, “female” business. “In modern communities, such as Hadza and Ace ,” scientists write, “groups of women collectively engage in gathering, only occasionally they are visited by adult men.” It seems that this feature was preserved in them from very distant antiquity: it is not without reason that the lion’s share of the tracks in the Engare Sero are female, and there are no children at all.

In the opposite direction (approximately to the northeast) six more trace chains were traced, apparently not connected with each other. The nature of the tracks suggests that these people moved individually, at fast pace and at different speeds. Two women and a man moved at an average speed, another man and one woman – a quick step. Finally, another chain was left by a running woman.

X-37B still goes into space with its sixth mission

X-37B still goes into space with its sixth mission