US, WASHINGTON (ORDO NEWS) — Many are mistaken, calling the most ancient musical notation the “epitaph of Seikilos” from Ancient Greece. The song, recorded in words and notation marks on a gravestone near Ephesus, dates from only 200-100 BC, that is, it can be called relatively young. The oldest “musical notes” are Hurrian songs, which are almost 3,500 years old!

Hurrites are a nationality that lived a couple of thousand years BC in the territory of Mesopotamia. They formed a number of small Mesopotamian states, traded there, fought, in general, lived how they lived. No Ancient Greece in those days was not as such. In the 1950s, active excavations were carried out of the royal palace of the Hurrian state of Ugarit near the hill of Ras Shamra (now, unfortunately, in Syria).

In the process, 36 cuneiform tablets were found with records different from ordinary texts (although only one was preserved in its entirety, without damage). The tablets were first published by the French archaeologist Emanuel Laroche – already with explanations. The cuneiform script had already been deciphered a long time ago, and therefore Lyarosh immediately understood that the plates contain music, hymn texts with explanations of how to execute them. Moreover, the names of the authors of music, that is, the oldest composers known to us, are preserved on some fragments. The tablets date back to 1400 BC. The best preserved tablet is No. 6, on which the hymn of Nikkal, the goddess of gardening, is recorded (although the name of the composer is not indicated here). On the plate is the text of the anthem (song) and instructions for the accompanist, who was supposed to play the nine-string summit (a kind of lyre). And on another plate there is even a guide for setting up the summit. Here it is, plate number 6.

One way or another, today the tablets are kept in the National Museum of Damascus (we sincerely hope that a crowd of revolutionaries will not destroy the museum during the next war).

Hit from the past

In contrast to the deciphered and played epitaph of Seikilos, Hurrian songs are a source of desperate debate between archaeologists and musicians. The main decryption base is, of course, the completely preserved Nikkal anthem. However, all 36 hymns, judging by the fragments, are recorded in a single way. The text of each song goes in a long spiral, not by bustrofedon, but simply unusual, and written in Hurrian. Under the text are written – already in Akkadian – instructions for execution: the names of the intervals and numbers indicating notes. This record entails controversy, since there is no exact interpretation of all notation of notes and intervals. At the very bottom of the tablet there is a colophon with the name of the author or at least the scribe. On the plaque with the anthem in the colophon it is written: “This song was recorded in the musical string” threadblock “by the scribe Hammurabi.” Hammurabi is the name of Akkadian, so, most likely, he did not compose the music, but only recorded it, plus the explanations he wrote in his native, Akkadian language (although Hurrian also certainly knew). On the fragmentary tablets containing the remaining hymns, four names of composers are found – and these are Hurrian names. Well, here they are, the oldest Tchaikovsky and Mozart: Tapsuhini, Puhiyana, Urkhiyya (this one wrote two whole hymns, the 8th and 12th) and Ammiyya.

The Akkadian diatonic system, in general, is known to us. There are as many as three tablets from various sources, where it is described quite specifically, and it is not so difficult for knowledgeable people to correlate it with the modern one. There were four intervals in this system — third, fourth, fifth and fifth, but the problem is different. The fact is that in each application, the system is based on a specific tool. That is, the recording of music for a seven-string (adopted in Babylon) and nine-string (rarer) gadget looks different, and the intervals are indicated in different ways. In addition, it is not always clear whether the designation refers to the whole seventh chord, or, for example, to the seventh note. 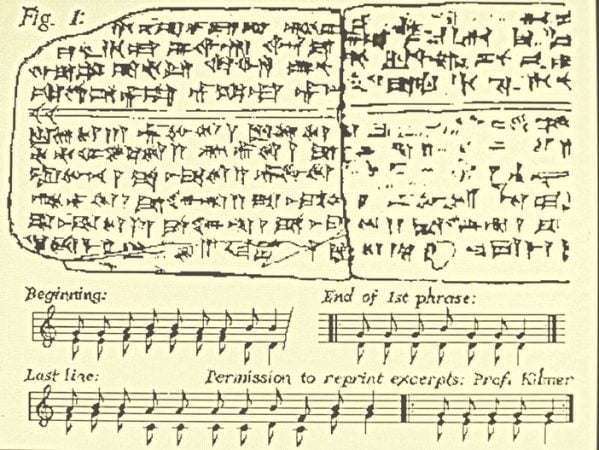 We will not go into details of the Sumerian-Akkadian string-note system. Most of this theory is based on the intervals between the seven strings, and as a result, not four intervals are obtained, but almost all twenty-four, and even burdened by the dependence on the type of instrument. In general, if anyone wants to, he can figure it out on his own. This is what the first two lines of the Nikkal hymn look like in decoding:

When decrypting the tablet, another problem arose. Some words were found in both Hurrian and Akkadian languages, and they were written the same way – only their meaning was different.

It should be noted that there are also problems with understanding the text. In particular, the Hurrian language is not completely deciphered, plus the texts of the hymns are written in the local Ugaritic dialect, which differs from the more or less deciphered dialects of other Hurrian states. However, one way or another, in the text about Nikkal she praises the goddess of the gardens, the wife of the moon god.

The text is written in four lines, and, apparently, the last seven syllables of each of the first three lines should be repeated at the beginning of the next line two times. However, this is the theory of Laroche, who has already encountered a similar scheme in Babylonian texts. Other archaeologists adhere to other theories regarding the technique of repeating refrain.

A famous attempt to shift Hurrian songs (more precisely, the Nikkal anthem) into a modern musical form, translate the whole words and publish all this in triumph, was made by the German accountant Hans-Jochen Thiel in 1977. The second is Theo Crispin, after a quarter of a century, in 2000. There are six interpretations in total (Til and Crispin are the last two, they were the only ones who decided to publish the full decrypted version; the first interpretation, partial, was given by Laroche himself, then a number of scientists). But David Walsten was the first to try Hurritic anthem No. 6 to play the notes in 1971. The most accurate interpretation to date is the 1993 version of Martin Litchfield West, played in 1993.

Reconstruction of the melody, played by the famous specialist in ancient music Michael Levy. Here Levy plays it specifically for video recording; she exists in the studio version on his Ancient Landscapes disc.

Darkness and cold: the catastrophic consequences of a nuclear war are named

Everyone can use telepathy – But not everyone knows about it

Darkness and cold: the catastrophic consequences of a nuclear war are named

Everyone can use telepathy – But not everyone knows about it

In Italy, a suitcase with cocaine fell on the roof of a house

In India, prisoners escaped with salt and pepper

A man found mysterious underground passages under his house