(ORDO NEWS) — The work of scientists is published in one of the most prestigious scientific journals – Nature Communications. KR2 belongs to a huge family of microbial rhodopsins – photosensitive proteins located in the cell membrane of archaea, bacteria, viruses and eukaryotes.

These proteins are capable of performing a wide range of functions, but the most interesting is the transfer of various ions through the membrane under the influence of light.

It is these ion channels and pumps that are the tools of optogenetics – one of the most relevant biomedical disciplines that allows you to control the activity of various types of body cells when irradiated with light. Optogenetics gained wide popularity due to a significant contribution to the development of minimally invasive brain research methods, as well as the treatment of neurodegenerative diseases such as Alzheimer’s, Parkinson’s, and others. Moreover, today optogenetics allows you to restore lost hearing, vision and muscle activity.

Unfortunately, despite the successes described, the development of optogenetics is complicated by a limited set of proteins that can be used to activate and inhibit body cells. For example, the most widely used optogenetics tool – channel rhodopsin 2 – is capable of simultaneously transporting sodium, potassium and calcium ions, as well as protons.

Its structure was first obtained by researchers and graduates of the Moscow Institute of Physics and Technology and published in the leading scientific publication Science. Low “selectivity” of this protein leads to the appearance of undesirable secondary (side) effects when working with cells. Thus, the optimization of protocols for the use of optogenetic instruments today requires a huge amount of time and money.

The search for new, more selective proteins for optogenetics is a priority in this area of ​​research. Rhodopsin KR2, found in 2013, is a unique optogenetic tool, as it allows under physiological conditions to selectively transfer exclusively sodium ions through the cell membrane. Understanding the mechanisms of its work is very important for optimizing the functional characteristics of this protein, as well as for creating new optogenetic tools based on it.

MIPT biophysicists in 2015 and 2019 published the first KR2 structures in various forms. In particular, they showed that the protein forms pentamers while in the membrane. Moreover, the formation of such complexes is necessary for the functioning of rhodopsin. However, in all the models described by the authors, the protein was in an inactive, i.e., ground state.

To understand the principles of ion transport through the membrane, the structure of the active state of the protein was also necessary, since sodium is transported by rhodopsin only after the latter is activated by light. It is such a crystal structure of high resolution that was obtained and described by scientists. 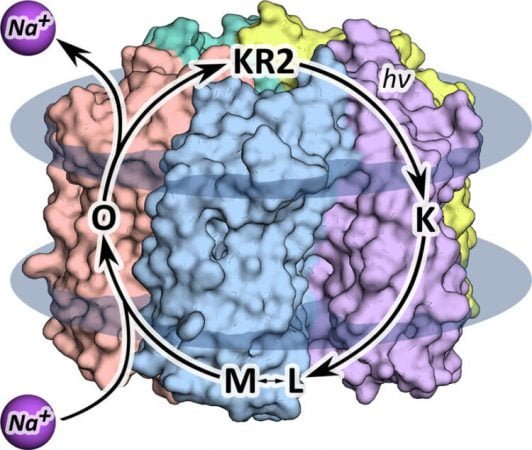 “Initially, we used the classical approach, activating KR2 in pre-grown protein crystals, illuminating them with a laser and fixing the active state by quickly freezing the crystal at 100K,” says the first author of the work, MIPT graduate student Kirill Kovalev. – We were lucky, because often such manipulations lead to the destruction of crystals. To avoid this, we had to carefully select the wavelength and power of the laser radiation, as well as adjust the exposure time.”

Such experiments require a large number of high-quality protein crystals. The unique equipment of the MIPT Center for Research on the Molecular Mechanisms of Aging and Age-Related Diseases made it possible to carry out massive crystallization of the rhodopsin KR2.

The most significant finding of the researchers was the identification of amino acid residues of the protein that bind the sodium ion inside the KR2 molecule. They determine the selectivity of rhodopsin to a specific type of ion. In addition, the structure of the high-resolution active state (2.1 Å) made it possible to determine the exact configuration of the sodium ion binding site in the active center of the protein.

Scientists have shown for the first time that the binding site formed by KR2 is ideally optimized for sodium ions during the evolution of rhodopsins. Thus, it is the resulting active state structure that should be used for the rational design of new generation optogenetic instruments based on KR2.

“Later in the course of our work, we obtained the KR2 structure in the active state at room temperature,” continues Kirill Kovalev. – For this, we had to modernize the known protocols for collecting crystallographic data. We also used the increasingly popular methods of serial crystallography using a synchrotron radiation source. ”

The structure of the KR2 active state obtained at room temperature confirmed the accuracy of the protein model previously determined at low temperature. This has helped scientists directly demonstrate that cryogenic freezing does not affect the internal structure of rhodopsin.

The resulting structures made it possible for the first time to describe the mechanism of active transport of sodium ions through the cell membrane under the influence of light. So, the researchers showed that the transfer of sodium by rhodopsin is most likely carried out by the hybrid mechanism, which includes the principles of both relay transfer of protons and passive diffusion of ions through polar cavities in the protein. The mechanism proposed by the authors was confirmed by functional studies of mutant forms of KR2, as well as computer simulation of the release of sodium ions from protein.

“Transport of ions through the membrane wall is a fundamental biological process. At the same time, the transfer of sodium ions should have a fundamentally different mechanism than that for protons, ”explains Valentin Gordeliy, director of research at the Institute of Structural Biology in Grenoble and scientific coordinator of the Center for Research on the Molecular Mechanisms of Aging and Age-Related Diseases at MIPT. “We first saw how the sodium ion binds inside the rhodopsin molecule, and also showed the mechanism of ion ejection into the intercellular space.”

The authors are confident that the results of their work not only reveal the fundamental principles that underlie ion transport through the cell membrane, but also have practical benefits for the needs of optogenetics. MIPT scientists continue to develop optimized forms of the KR2 protein to expand the arsenal of methods for studying the brain and treating neurodegenerative diseases.

Scientists from the Moscow Institute of Physics and Technology (MIPT), the Institute of Structural Biology of the University of Grenoble and the European Accelerator Complex in Grenoble (France), the Julich Research Center, the University of Aachen, Max Planck Institute, the European Laboratory of Molecular Biology (Germany), and also a synchrotron radiation source ALBA (Spain). This work was supported by the Ministry of Science and Higher Education of the Russian Federation and the Russian Foundation for Basic Research.