(ORDO NEWS) — The central supermassive black hole (SMBH) in our Galaxy may have “leaked.” Scientists discovered signs of a flame-shaped jet emitted from this SMBH several thousand years ago.

NASA’s Hubble Space Telescope was unable to photograph these ghostly jets, but it helped to find circumstantial evidence of their existence, according to which this jet still presses on a giant cloud of hydrogen, and then disintegrates into “splashes”, similar to the jet water gushing from the irrigation hose turns into a cloud of spray, falling into a pile of sand.

“The Milky Way’s central black hole is by no means ‘dormant’, but it is showing variable activity and is currently on the wane,” said Gerald Cecil of the University of North Carolina at Chapel Hill, USA. Cecil and his team carried out multiwavelength observations of the vicinity of the Milky Way black hole using several observatories, and found that the Galaxy’s SMBH explodes with mini-jets whenever it engulfs any sufficiently massive object, such as a gas cloud.

In 2013, scientists discovered an X-ray jet extending southerly from the Milky Way’s SMBH using NASA’s Chandra space observatory, as well as radio waves recorded by the Jansky Very Large Array observatory. This jet also showed signs that it was crashing into the surrounding gas cloud.

Cecil set out to find an appropriate counter jet, stretching northward. Using the Atacama Large Millimeter / submillimeter Array (ALMA) radio observatory, the scientist was able to track the jet line from the SMBH side, which at some distance from it entered the gas cloud, forming a huge “bubble” pierced by small channels through which high-energy radiation moves, similar to how the blood vessels in the human body end in an extensive network of capillaries that feed the tissues. The authors attributed these signs to evidence of the existence of a mini-jet.

The study is published in the Astrophysical Journal. 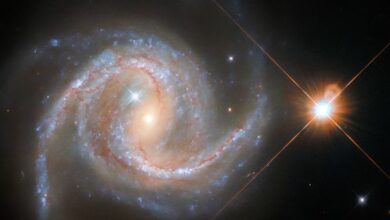