(ORDO NEWS) — The European Southern Observatory’s Very Large Telescope (VLT) interferometer was used to observe the cosmic dust cloud at the center of the galaxy Messier 77, where the supermassive black hole SMBH lurks.

These findings have allowed us to confirm predictions made about 30 years ago and to gain a deeper understanding of active galactic nuclei, one of the brightest and most mysterious objects in the Universe.

Active galactic nuclei (AGNs) are extremely powerful energy sources associated with SMBHs and lying at the centers of galaxies. These black holes feed on large volumes of dust and gas falling on them.

Before this material is consumed, it spirals in the direction of the black hole, and in this process a huge amount of energy is released, which often makes the AGN brighter than all the stars in this galaxy combined.

In a new study, a team led by Violeta Gámez Rosas performed unprecedentedly detailed observations of the central region of the galaxy Messier 77 and discovered a thick ring of dust and gas that hid the SMBH. This discovery confirmed a theory developed 30 years ago, known as the unified AGN model.

Astronomers are aware of various types of AGNs. For example, some of them burst into bursts in the radio range, while others do not show such a tendency; some AGNs are very bright in the visible range, while others, such as Messier 77, are less bright in visible light.

According to the unified model, despite these differences, all AGNs have the same basic structure, a SMBH surrounded by a thick ring of dust.

In accordance with this model, all differences in appearance between AGNs are associated with the orientation of the SMBH and the ring surrounding it in space relative to an observer located on Earth. The type of AGN observed is determined by how far the dust ring covers the black hole from the observer.

Astronomers have previously found evidence in favor of the unified model, including warm dust at the center of the galaxy Messier 77. However, scientists remained doubtful as to whether the dust could completely obscure the SMBH and therefore explain AGN’s lower optical luminosity.

By combining data on the temperature of cosmic dust obtained using the Very Large Telescope interferometer, the researchers compiled a detailed picture of the distribution of dust in the vicinity of a black hole and indicated the exact location of the “space monster”.

The cloud of dust – arranged in the form of a thick inner ring and a wider disk – and the SMBH at its center were consistent with the predictions of the combined model, the authors concluded. 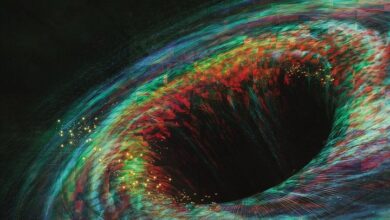