(ORDO NEWS) — The destruction of Sodom and Gomorrah in biblical history 5,000 years ago was unexpectedly confirmed by an ancient Sumerian clay tablet known as the Sumerian planisphere.

According to a study by two scientists who conducted eight years of research, the tablet, which has baffled scientists for 150 years, is actually a description of an actual eyewitness to the fall of an ancient asteroid that destroyed the cities of Sodom and Gomorrah, killing thousands of people. people and causing destruction on an area of ​​more than 600,000 square kilometers.

Scientists have called the event the Kofels Impact Event, and they say it has great catastrophic consequences. The impact itself is equivalent to an explosion of over 1000 tons of TNT.

The story of Sodom and Gomorrah from the Old Testament tells how the wrong behavior of the inhabitants of these cities engaged in debauchery offended Abraham, who personally decided to live in another place, but nevertheless pleaded with two angels who had come to warn of the impending destruction of the cities – to spare them for the sake of his nephew Lot, who, despite the departure of Abraham, decided to live in Sodom.

Lot and his family were eventually saved before the destruction of the cities, but Lot’s wife, who, although warned not to do so, looked back at the raging fire in the place of the cities, and turned into a pillar of salt.

Scientists believe that salt conversion could be a fitting description of what could happen to someone too close to the intense heat of a nuclear explosion.

A study by two scholars, Alan Bond and Mark Hempsell, a tablet discovered by Victorian archaeologist Henry Layard in the ruins of a royal palace in Nineveh, found it to be a Sumerian astrologer’s description of the events of June 29, 3123 BC. just before dawn.

Using computers, they were able to recreate the night sky thousands of years ago and finally pinpoint the eyewitness testimony on the plaque. Bond and Hempsell stated that this Sumerian tablet is a copy of a much older tablet created by someone around 700 BC.

Half of the table shows the position of the planets and clouds, and the other half describes the movement of an object similar to a “stone bowl” moving at high speed across the sky.

According to scientists, this fast moving object corresponds to an asteroid that orbited the Sun close to the Earth. Its trajectory could lead to a collision with the valley where the cities described in the biblical history were located.

Hempsell says: “He entered at a very low angle – about six degrees – and then cut off a mountain called Gaskogel about 11 kilometers from Kefels.” Hempsell went on to explain how the object exploded as it moved down the valley and ultimately produced an event of literal Biblical proportions. 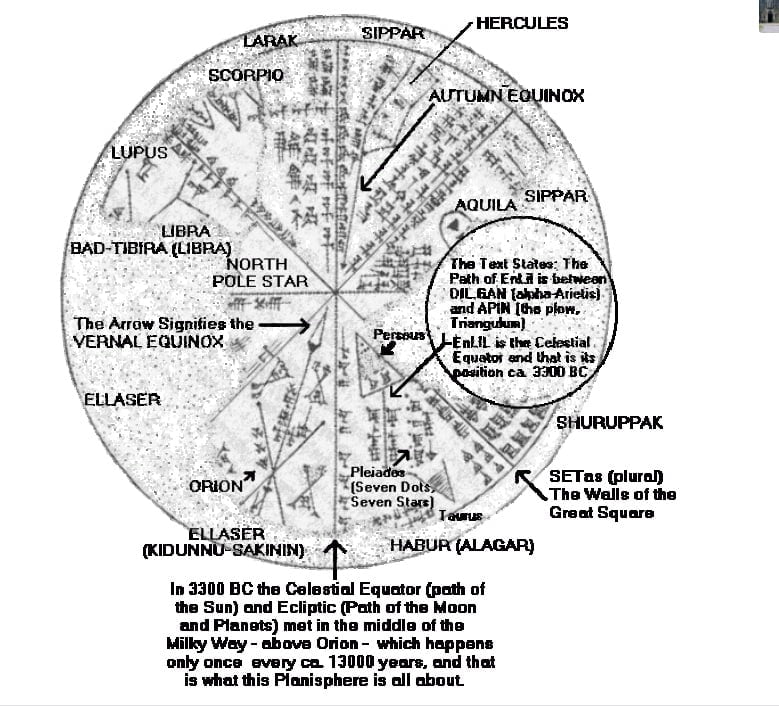 Bond and Hempsell do claim that the explosion created a huge mushroom cloud and the air was filled with thick dust for hundreds of kilometers. This is the so-called “Kefels event” known in science.

However, according to geologists, it is generally believed that the Kefels event occurred about nine thousand years ago, much earlier than the date of 3123 BC indicated in the Sumerian records, Bond and Hempsell believe that the dating error was caused by contaminated samples used in an earlier analysis.

Other researchers disagree, saying that Bond and Hempsell claims are contradictory. John Taylor, a retired archaeologist at the British Museum, said there was no evidence that the ancient Sumerians could accurately describe such astronomical events with such accuracy.

But scientists generally deny everything that does not fit into the “true picture of human history” invented by them, and there is no doubt that when it comes to recognizing the true progress of the ancients, they immediately begin to refute any evidence that the history of mankind and the level of development of the ancients pre civilization was much higher than they would have liked.

Why it is dangerous to eat only once a day

Why it is dangerous to eat only once a day