(ORDO NEWS) — Billions of light-years away, astronomers have discovered a galaxy at the center of which two supermassive black holes weighing hundreds of millions of solar masses orbit each other at a distance only 50 times the distance between the Sun and Pluto.

This is only the second such discovery in the history of astronomy. The merger of a pair of black holes of colossal proportions is expected in just 10 thousand years.

A team of astronomers led by researchers from the California Institute of Technology has found evidence that two supermassive black holes are orbiting each other at the center of the distant galaxy PKS 2131-021.

Nine billion light-years away, PKS 2131-021 is classified as a blazar galaxy with an active nucleus. This means that one of the black holes in its center absorbs dust and gas from the accretion disk, creating a jet of high-energy particles (jet) flying towards the Earth at a speed close to the speed of light.

The discovered system of two supermassive black holes in the active center of a galaxy is only the second of its kind.

The previous candidate, in the center of the galaxy OJ 287, was found quite recently: an article with the results of the study was published earlier this year. Moreover, in the first pair, black holes are further apart, making a revolution around a common center of mass every nine years, compared with two years for a new candidate for a pair system.

Interestingly, the final evidence for the presence of two supermassive black holes in the galaxy PKS 2131-021 was obtained from archival data for 45 years of observations.

According to the study, a powerful jet emanating from one of the two black holes is constantly shifting due to the pair’s orbital motion. This causes periodic changes in the brightness of the blazar in the radio range, observed since 1975.

The combination of observation data for PKS 2131-021 from five observatories gives an almost perfect sinusoidal light curve (signal), in contrast to all previous observations of active galactic nuclei. According to these data, the merger of black holes will occur in about 10 thousand years.

“When we realized that the peaks and troughs of the light curve recently discovered coincided with the peaks and troughs observed between 1975 and 1983, we realized that something special was going on,” comments Sandra O’Neill ( Sandra O’ Neill , lead author of the new study and an undergraduate student at the California Institute of Technology. Her supervisor is Tony Readhead , professor emeritus of astronomy at the same institute.

According to Professor Readhead, the events surrounding the discovery unfolded like a “good detective novel” starting in 2008.

Then he and his colleagues began using the 40-meter telescope of the Owens Valley Radio Observatory (OVRO) to study how black holes convert the material they “eat” into relativistic jets that accelerate matter up to speeds of 99.98% of the speed of light. To this end, they tracked the brightness of more than 1,000 blazars until they noticed a unique case in 2020.

“The signal from the PKS 2131 changed not just intermittently, but sinusoidally,” Readhead explains. “This means that there is a pattern that we can continuously monitor over time. The question is, how long does this sinusoidal signal last?” 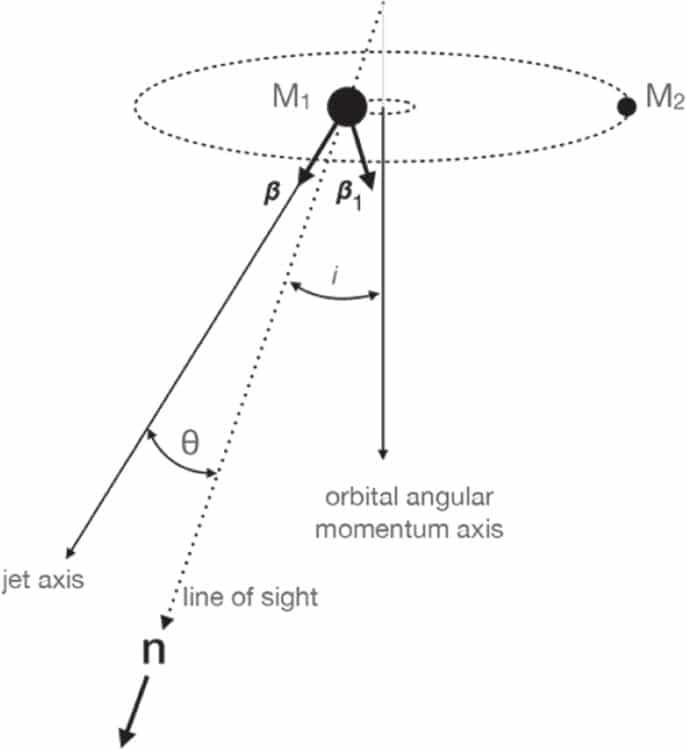 The research team then looked at archived radio data to find past peaks in the light curves that matched predictions based on more recent OVRO observations.

“The story would have ended there, because we didn’t know that data about this object existed before 1980,” Reidhead adds. “But then Sandra took on this project in June 2021. If not for her, this beautiful find would have remained lying on the shelf.

When the project returned to review, Readhead and student O’Neill looked through the literature and found that MIT’s Haystack Observatory made radio observations of PKS 2131-021 from 1975 to 1983. The data revealed another peak matching their predictions, this time in 1976.

Reedhead compares the observed fluctuations in the jet’s radio signal to a ticking clock, with each cycle or period of the sine wave corresponding to a two-year orbit of black holes (although due to the expansion of the universe, the observed cycle is actually five years).

This ticking was first seen in 1976 and continued for eight years before disappearing for more than 20 years, likely due to changes in the accretion disk around black holes.

“But the clock kept ticking,” Riedhard says. “The stability of the signal period over the past 17 years strongly suggests that this blazar contains not one supermassive black hole, but a pair orbiting each other.”