(ORDO NEWS) — The fossil of an ancient relative of the giraffe made it possible to identify key features of the evolution of these animals and understand why they have such long necks.

The new study, led by scientists from the Institute of Vertebrate Paleontology and Paleoanthropology of the Chinese Academy of Sciences, has been published in the journal Science.

Exactly how giraffes evolved was a mystery for a long time, although there were suggestions that the process of gradual lengthening of their necks was affected by the height of the foliage that giraffes had to reach.

However, as the number of observations of the behavior of giraffes in the wild grew, there was also an understanding that the long necks of giraffes actually serve as their weapons in competition for a female.

In particular, giraffes use their two- and even three-meter necks to “throw” their heavy skulls equipped with small ossicons – i.e. horn- or antler-like protrusions – to the weak points of rivals. As a result, the longer the giraffe’s neck, the more damage it can inflict on its opponents. 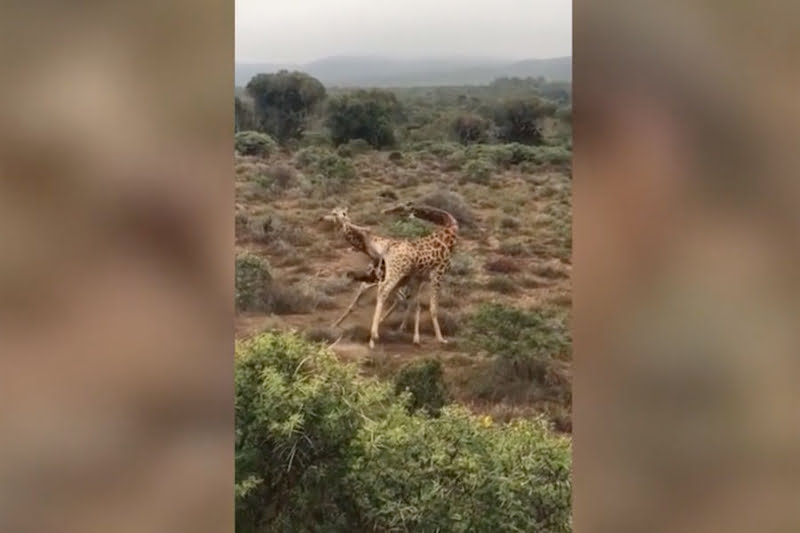 Unusual fossils of a strange giraffe-like creature in the form of a skull and four cervical vertebrae were found in deposits of the early Miocene – this is about 17 million years ago – on the northern outskirts of the Dzhungar basin in Xinjiang province.

Among other mammals, it stood out for several quirks at once, including the presence of a large disc-shaped ossicon in the middle of the head.

This “decoration” in the eyes of Chinese scientists made it look like a “heavenly ram” sezhi – a one-horned creature from ancient Chinese mythology – which gave the name of the fossil itself – Discokeryx xiezhi.

According to the researchers, D. xiezhi’s extremely robust neck vertebrae were particularly well adapted to high-speed frontal impacts, in this sense it was superior to any of the modern animals, including musk oxen, whose vertebrae are also quite well adapted to head impacts.

“Both modern giraffes and D. xiezhi belong to the same superfamily Giraffoidea. Although the morphology of their skulls and necks is very different, in both cases their development was closely related to courtship rituals, and both evolved in a very extreme direction, ”says lead author Wang Shiqi.

Now Chinese researchers studying the remains suggest that the necks of giraffes lengthened due to the fact that such males were preferred by females.