(ORDO NEWS) — Uranium glass looks pretty normal until you look at it under ultraviolet light.

Uranium glass is, not surprisingly, glass that has been cut with uranium, and depending on the amount of uranium, the glass can be opaque or transparent. It may be green or transparent, but in a dark room with ultraviolet light, it fluoresces bright green.

What is uranium glass?

Incorporating uranium into glassware first began as early as the 1830s as a means of adding color to glass. Just as other heavy metals were used to color glass, uranium was added to produce a green tint long before its dangerous energy potential was known.

It is estimated that more than four million decorative items were made in the United States between 1958 and 1978. That’s a lot of luminous glassware.

Most of the new glass contained less than 2 percent uranium, but a few select items from the early 1900s may be a quarter uranium. Uranium is a heavy metal and radioactive element that is known for its use in making the atomic bomb. 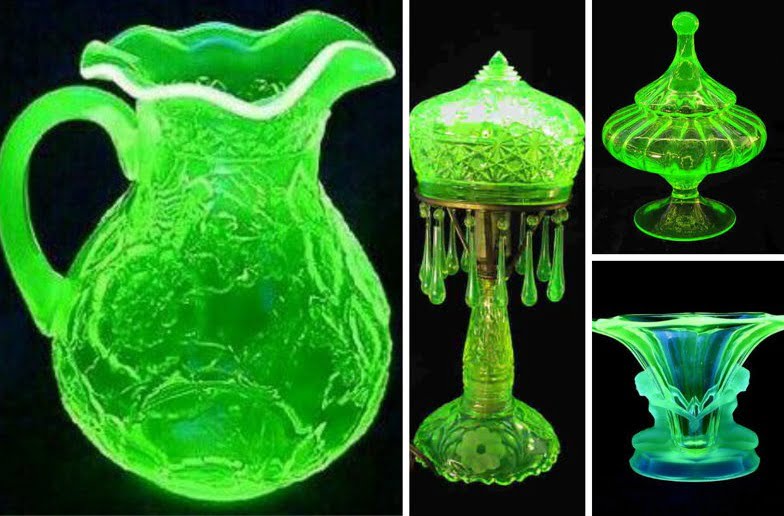 When it comes to the risk of radiation exposure, some of the products have a higher ability to increase human exposure.

These include earlier pieces with higher concentrations of uranium, which are more likely to leach into food or drink contained in glassware and expose hands to higher doses of radiation, although this is still quite low.

Some uranium glass was created with natural uranium, but after World War II, the use of depleted uranium became more common. Depleted uranium has only alpha radiation, which cannot penetrate the skin, so it is not considered a serious hazard to the body.

Researchers have found that the people who deliver the glass to the consumer are most at risk of radiation exposure.

As for the owner of the uranium glass, experts have calculated that the maximum calculated dose is only 1-2% of a person’s average annual radiation exposure. However, experts warn against cutting uranium glass without proper precautions.

How to identify uranium glass

Some examples of uranium glass can be easily detected with the naked eye. However, for clearer glass, you may need ultraviolet light and a dark room to detect its radioactive potential.

The hallmark of uranium glass is an intense green glow under ultraviolet light, and enthusiastic collectors simply use Geiger counters.

A method for separating uranium from radioactive waste has been developed

A method for separating uranium from radioactive waste has been developed