(ORDO NEWS) — The Space Foundation, an American non-profit organization that has existed since 1983, has renamed its Yuri’s Night auction party, named after the first man in space, Soviet cosmonaut Yuri Gagarin.

“In light of current events in the world, the Space Foundation has renamed St. George’s Night to “Space Celebration: Find out what happens next.”

The purpose of this fundraising event remains the same – to celebrate human achievement in space while inspiring the next generation to reach for the stars . The name change statement has already been deleted (confirmation can be seen in the screenshot below). 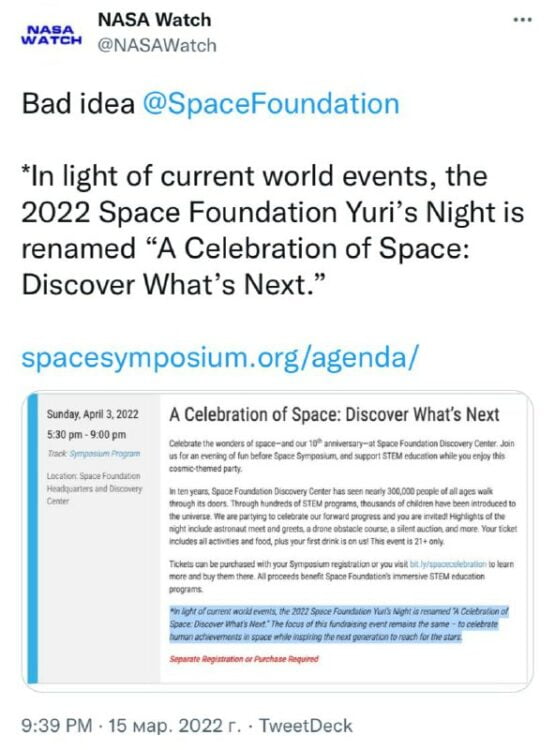 The Space Symposium takes place every spring at the Broadmoor resort in Colorado Springs (USA). This year the event, which includes various seminars, lectures, forums, auctions and other activities, will take place from 4 to 7 April.

As the authors of the Futurism portal note , who drew attention to such a “rather dubious demonstration of solidarity with the Ukrainian people,” Yuri Gagarin was born and lived in the USSR, a completely different country. “Erasing the name of the first person to fly into space while ostensibly celebrating ‘human achievements in space’ is bad enough.

And to do this in accordance with the milk-toast trend to deny everything Russian, including famous composers and food, is simply outrageous, ”the note emphasizes. According to journalists, such censorship will not help any Ukrainian, but will serve as another reminder that such “activism” often runs counter to reality.

Let’s clarify that only one “St. George’s Night” was renamed. The Yuri’s Night event is a kind of franchise (or flash mob), every year it is held by anyone in hundreds of places on the planet (for example, in 2011 there were 567 events with this name in 75 countries on seven continents).

How many such events will take place this year and whether any of them will change their name – in addition to the one that arranges the “Space Symposium” – is not yet known.