(ORDO NEWS) — By 2031, the NASA space agency plans to return to Earth samples of Martian rocks collected by the Perseverance rover.

Many scientists are concerned that alien pathogens can get to our planet with them, and the consequences of this can be the saddest. The scientific observer Nikolai Grinko understood the issue.

Scientists have long dreamed of getting their hands on fragments of other planets, and today they are closer than ever to this event. Perseverance famously breaks off samples in the Martian crater Lake and prepares them to be sent to Earth.

Researchers are rubbing their hands impatiently: it is one thing to study Mars with the limited instruments of the rover and look at the photographs taken from there, and quite another to study the stones of another world here, using any modern methods and tools.

The Mars Sample Return (MSR) mission is in full swing, despite the fact that many vehicles for its implementation have not yet even left the drawing stage.

But along with the expectation in the scientific community, fears are also ripening. We still don’t know if there was life on Mars.

It is possible that some of its fragments have survived to this day (of course, not in the form of full-fledged organisms), and once they enter the earth’s biosphere, they will be capable of… No one can imagine what exactly, and this only increases anxiety.

The consequences may turn out to be the most unpredictable, and the closer the cherished date, the louder the voices of skeptics are heard.

Things got to the point that NASA experts are forced to hold meetings with journalists, explaining in detail how exactly the samples will be delivered to Earth and what security measures will be taken.

Each mined stone will be enclosed in its own sealed container, they will be opened in specially equipped laboratories, tightly isolated from the outside world, only robots and remote manipulators will work with them…

Professor Stephen Benner, who is working with NASA on ways to detect alien genetic materials, comments: “In the more than 3.5 billion years since life appeared on Earth, trillions of other rocks have made similar journeys.

If the Martian microbiota exists and can damage the Earth’s biosphere, it has already happened, and a few more kilograms from NASA will not change anything.”

Benner recalls that several tons of extraterrestrial matter hits the Earth every year, about 500 kilograms of them from Mars. Meteorites that collide with the Red Planet usually knock rock fragments into space, and eventually some of them fall on our planet. 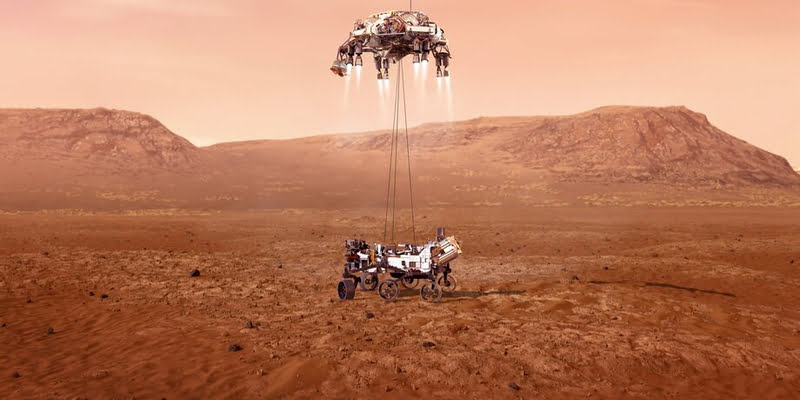 Skeptics have serious objections to these arguments. The tons of extraterrestrial matter that the professor is talking about are mostly dust that has traveled through space for many centuries and is thoroughly “fried” by radiation.

Life in such conditions is unlikely to survive. Larger meteorites are also decontaminated by cosmic radiation, and those that still reach the Earth’s surface undergo “additional processing”: entering the atmosphere, celestial stones are heated to very high temperatures, which also protects us from alleged extraterrestrial microorganisms and alien fragments DNA.

But the samples delivered during the MSR mission will be well protected: this is the essence of the whole project! Even a planned landing at a speed of about 150 km / h should not damage the pressurized capsules.

Scientists want to bring to Earth fresh, untouched fragments of the alien lithosphere, and not meteorites that have been dangling in interplanetary space for thousands of years. And if Martian pathogens do exist, they will be delivered to us unscathed.

True, there are still more optimists on this issue than pessimists. Most researchers believe that there is no danger: if life on Mars existed, it was so long ago that its likely remains cannot do us any harm.

It’s like being afraid to catch the ancient flu from the fossilized bones of a dinosaur: there is no biological material in them for a long time. For the same reasons, it is foolish to fear the introduction of Martian viruses to Earth. Nothing like that will happen.

May be planets in the orbits of cruel dead stars, and now we know how to find them

May be planets in the orbits of cruel dead stars, and now we know how to find them