(ORDO NEWS) — These two galaxies are being pulled together by gravity, and in a billion years they’ll likely become one.

Captured by the Hubble Space Telescope, these two galaxies are caught in a dangerous dance that will culminate – at some point in the very, very distant future – in their merging.

They are likely to have been dancing for the last billion years, and it could be another billion before they become one.

“These are two galaxies having a bad day,” says Prof Chris Lintott, astronomer at the University of Oxford and presenter for BBC Four’s The Sky at Night.

“Named NGC 5953 and 5954, these two spiral galaxies are colliding, and you can see material from 5954 being twisted and distorted by the gravitational pull of its neighbour.”

However, it’s unlikely to be the case that one galaxy is stronger than the other.

“They’re about the same size, so my guess is that it’s a sort of mutual attraction,” says Lintott. “Their gravity will be pulling on each other.”

When they do finally collide, their stars will actually remain separate.

“While you won’t get a stellar collision, the gas in the galaxy is being distorted and energised so you’ll get a spectacular burst of star formation. These galaxies are about to light up like fireworks.”

Once the initial collision has happened, Lintott explains that the galaxy will begin to settle down. But the form which this new galaxy will take is still unknown. “Sometimes when you collide two spiral galaxies like these, you get a nice big elliptical galaxy – basically the big ball of stars. But sometimes we think that a new spiral galaxy will form. And we don’t know yet which of those two things will happen.”

The final stage of the collision will be when the two galaxies’ black holes merge.

“Larger galaxies have black holes at centre, and eventually the two black holes will merge to form a bigger black hole. People are now beginning to think about how to build experiments to detect the merging of those black holes through gravitational waves.”

These two galaxies together are called Arp 91, because they were listed in Halton Arp’s 1966 Atlas of Peculiar Galaxies. This particular photograph was taken by a group being led by Julianne Dalcanton, who are aiming to take pictures of lots of these peculiar galaxies.

“We’re also looking for unusual things found by volunteers as part of our Galaxy Zoo Project, including lots of these mergers,” says Lintott.

While these collisions are common between smaller galaxies in the Universe, a merger of this size is “once in a lifetime,” says Lintott.

We know that our own Milky Way will experience a similar collision in around five billion years time, with our neighbouring galaxy Andromeda. 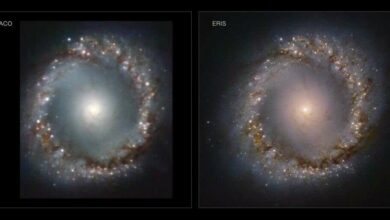