(ORDO NEWS) — The supermassive void’s extreme jet is pointed toward our planet. But don’t worry, it’s 8.5 billion light-years away.

Though such flashes aren’t exactly a new thing for scientists astronomers have seen loads of these glimmers burst forth from deep space before this particular one existed in a league of its own.

Emanating from about 8.5 billion light-years away, it appeared to give off more light than 1,000 trillion suns combined. The human mind can barely comprehend such a quantity, let alone such a quantity of… suns.

Since this glint’s spectacular discovery, scientists worldwide began trying to decode where, why and even how the dazzling event could have occurred.

Zwicky picked up the signal of a uniquely extreme “tidal disruption event,” or TDE.

In other words, the team behind these studies thinks the flash came from a jet of matter spilling from a supermassive black hole’s insides, traveling at supersonic speeds and pointed directly toward our planet.

“We found that the jet speed is 99.99% the speed of light,” Matteo Lucchini, a researcher at MIT’s Kavli Institute for Astrophysics and Space Research.

When black hole pioneer John Wheeler introduced the idea of the TDE-jet combo in 1971, he described it as “a tube of toothpaste gripped tight about its middle,” leading it to “squirt matter out of both ends.”

This jet, if the team is correct about its existence, would represent the farthest tidal disruption event ever detected.

But what’s especially striking about it is its brightness. That’s because the brighter the object, the easier it is to glean information from it.

A total of 21 telescopes around the world gathered observation data on the jet across a wide swath of types of light, from radio waves to high-energy gamma rays.

All this information was then compared with data from known cosmic events ranging from neutron stars to kilonovae, but the only possibility that provided a solid match was a jetted TDE pointing right at us.

To that end, the researchers believe it shows up as unnaturally bright from our vantage point on Earth because of two reasons.

First, the jet’s black hole dwelling is likely to be devouring a nearby star, thereby releasing a substantial amount of energy and emitting a ton of light during its feast.

As study co-author from MIT, Dheeraj “DJ” Pasham puts it, the jet is extremely active and in a “hyper-feeding frenzy.”

“It’s probably swallowing the star at the rate of half the mass of the sun per year,” Pasham said in a statement.

“A lot of this tidal disruption happens early on, and we were able to catch this event right at the beginning, within one week of the black hole starting to feed on the star.”

But second and most fascinating, in our opinion is due to an effect called “Doppler boosting.”

Basically, the Doppler effect refers to how sound waves, light waves and any other sort of wave changes as the thing making those waves travels toward or away from you.

Think about what happens as a car blasting music drives by your house. As it gets farther and farther away, the sound not only becomes less pronounced, but it often changes in pitch.

This is because the sound waves are kind of stretching out, making your brain recognize them as at a lower pitch.

The Doppler effect happens with light waves too often referred to by astronomers as redshift when talking about bright galaxies and stars moving away from our planet.

As those items move farther away, the light waves they emanate stretch out, turning from tighter blueish ones to relaxed redder ones.

Eventually, they even tread into infrared waters, invisible to human eyes and standard optical machines which is why NASA‘s James Webb Space Telescope is such a big deal.

It can catch those super-duper-stretched out wavelengths present in the deep, dark universe.

But in the case of AT 2022cmc’s relativistic jet, light is moving toward us, so it’s not getting redder or softer with distance.

It’s getting increasingly luminescent while its photons move closer to our telescopes, further enhanced by the fact they’re spewing out with enough vigor to almost match the speed of light.

“Because the relativistic jet is pointing at us, it makes the event much brighter than it would otherwise appear and visible over a broader span of the electromagnetic spectrum,” said Giorgos Leloudas, an astronomer at DTU Space in Denmark.

Typically, unnaturally bright bursts of light like this tend to stem from what’re known as gamma-ray bursts.

Gamma-ray bursts are also magnificent jets, though made up of X-ray emissions spit from massive stars as their stellar bodies collapse.

Because of their shimmering nature, these phenomena tend to populate the astronomy hall of fame.

Last month, in fact, scientists grew stunned by a powerful gamma-ray burst coming from some 2.4 billion light-years away in the universe. It’s literally called B.O.A.T — the brightest of all time.

But AT 2022cmc, after further speculation, was definitely not a gamma-ray burst.

“This particular event was 100 times more powerful than the most powerful gamma-ray burst afterglow,” Pasham said. “It was something extraordinary.”

Lo and behold, after weeks of data mining and pulling out all the astronomical observation stops with X-ray, radio, optical and UV telescopes, the team concluded that AT 2022cmc must be coming from a black hole’s magnetic whirlpool of debris.

It must be a tidal disruption event, pigmented by the Doppler effect.

Scientists were also able to use the full spectrum of observations of AT 2022cmc to help determine its temperature and distance.

“Our spectrum told us that the source was hot: around 30,000 degrees, which is typical for a TDE,” said Matt Nicholl, associate professor at the University of Birmingham.

“But we also saw some absorption of light by the galaxy where this event occurred. These absorption lines were highly shifted towards redder wavelengths, telling us that this galaxy was much further away than we expected.”

Remarkably, the center of this far off galaxy is not yet visible because it is washed out by the brightness of AT 2022cmc, but when it eventually fades, the source galaxy may become observable with the James Webb Telescope.

In the meantime, researchers will continue to scan the sky for the exotic and poorly understood jetted TDE.

“We expect many more of these TDEs in the future,” Lucchini said. “Then we might be able to say, finally, how exactly black holes launch these extremely powerful jets.” 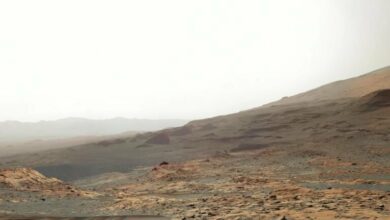