(ORDO NEWS) — John tells us, “In the beginning was the Word, and the Word was with God, and the Word was God.” The Upanishads (sacred Hindu texts) say that the divine, all-encompassing consciousness first manifested itself as the sound “OM”, the vibration of the Supreme.

Everything has its own frequency. Pythagoras created his musical scale, starting with the note A (next to middle C), which resonates at 111 Hz.

Perhaps this single note contains many overtones, like white light, which contains all colors. Perhaps it is the cosmic “I love you” that resides within each of us. 111 Hz is the frequency of a low male voice.

Cambridge professor and archeoacousticist who explores the field of archaeology and acoustics and visits ancient sites and temples, analyzing the ritual use of sound.

He found that burial mounds in Ireland called cairns, despite being made of different materials and different sizes, all resonate at the same specific frequency: 111 Hz. 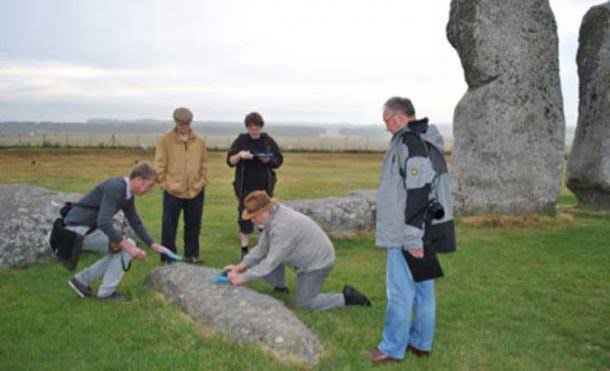 He decided to go further and study what happens to the brain when it is exposed to a frequency of 111 Hz.

MRI scan results show that at 111 Hz, the brain shuts down the prefrontal cortex, deactivating the language center, and temporarily switches from left-sided to right-sided dominance, which is responsible for intuition, creativity, holistic information processing, inducing a state of meditation or trance.

Further research led by Professor Robert Jahn tested the acoustic behavior of megalithic monuments in the UK, showing that they maintain a strong resonance at an audio frequency of 95 to 120 hertz.

The Maltese Hypogeum is a temple carved into the rock in 3600-2500. BC, with an area of ​​about 500 m2, the lowest room of which is located at a depth of about 11 meters underground, mirroring the temples above ground, which are the oldest free-standing structures on Earth.

Testing that analyzed the sound in the Oracle Chamber at the Hypogee showed it to match the same resonance pattern at 111 Hz. 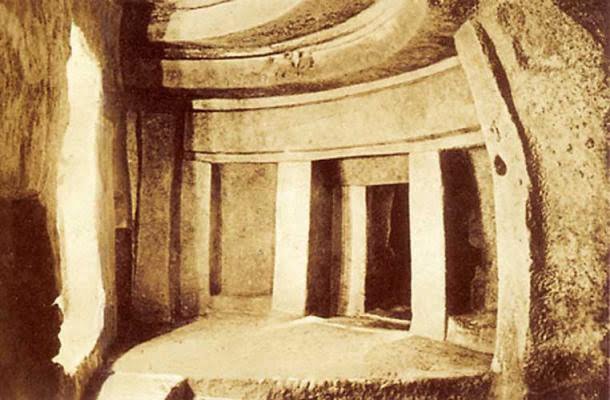 Photo taken in 1910 inside the Maltese hypogeum

Seven thousand years ago, a thousand years before the Egyptian pyramids, in the Mediterranean, in Malta, an amazing culture seemed to flourish in peace and harmony for 2500 years.

No traces of weapons or defensive architecture have been found in the remains of their time.

Their cult appears to have rituals that are life-affirming, earth and nature oriented, worshiping a Great God/Goddess, experiencing the divine as feminine and masculine, attuned to the natural rhythms and cycles of the Sun, Moon, and Earth, and the changing times of the year. These Neolithic people were certainly not wild cavemen. 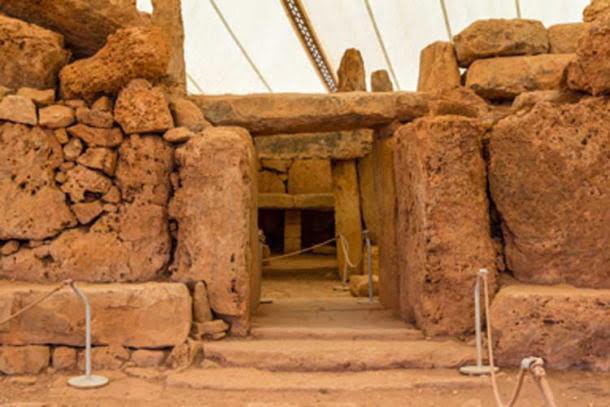 Entrance to Mnajdra temple in Malta

So, 7,000 years ago, the culture that settled in Malta and built the Maltese megalithic temples had advanced knowledge not only about architecture, but also about sound rituals that induce trance meditation or a higher state of consciousness.

It is likely that the sound ritual was used to introduce “initiates” into trance meditation, enhancing their emotional and social intelligence.

Secrets of the Temples of Malta

Having descended into the Hypogeum, one can re-join this culture, which used overtone singing, unearthly, angelic singing, bell ringing, singing balls and drums to achieve altered states of consciousness.

These sacred musical rituals have found their place in religions around the world: in Christian mass singing, Buddhist chants.

The sound resonates through the bones at the Hypogeum, and people from all over the known world could use the island as a center for their mystical practices, a place of pilgrimage, coming to worship their beloved Goddess or experience the Divine.