(ORDO NEWS) — On March 26, the ESA Solar Orbiter made its closest approach to the Sun to date. He got inside the orbit of Mercury, where it was hot, but it was worth it.

Solar Orbiter is the most sophisticated science lab ever sent to the Sun, according to the ESA. It is equipped with a powerful set of instruments, including a magnetometer, an ultraviolet imaging device, a solar wind plasma analyzer, and others. A wide range of instruments allows him to observe solar phenomena in a variety of ways.

It is advantageous for a spacecraft to get as close to the Sun as possible. But as Solar Orbiter gets closer, it gets hot. The first line of defense for a spacecraft is a heat shield. It is a layered titanium device mounted on a honeycomb aluminum pole, with a carbon fiber skin designed to dissipate heat.

Between all this and the body of the spacecraft is another 28 layers of insulation. During this rendezvous, the heat shield reached a temperature of 500 degrees Celsius.

Shielded from the heat, Solar Orbiter collected a lot of data during its rendezvous. Scientists need more time to work with it and understand it, but the images and videos grab attention right away. One solar feature that has caught everyone’s attention is the “space hedgehog”.

Luckily, the Sun put on a show during Solar Orbiter’s rendezvous with it. Flares occurred on the Sun, and even a coronal mass ejection (CME) directed towards the Earth.

Solar Orbiter has several remote sensing instruments, and scientists have used them to predict when the CME will reach Earth. They posted their prediction on social media, and after 18 hours, Earth observers were ready to see the aurora emerge. The ESA published a timeline explaining how this happened.

The orbiter also provided us with the highest resolution image of the south pole of the Sun.

Scientists are interested in the solar poles because of how the Sun’s magnetic fields work. Magnetic fields create powerful but temporary active regions on the surface of the Sun, and these fields rise and fall towards the poles and are then reabsorbed by the Sun.

Scientists believe that they somehow serve as seeds for the next solar activity. Detailed images of the Sun’s south pole should help researchers understand how it all works.

Solar Orbiter has a lot of interesting things ahead. Over the next four years, the spacecraft will collide with Venus for the fourth and fifth time.

Each time, its slope will increase, which will allow it to get a more direct view of the solar poles. By December 2026, the spacecraft’s orbit will be tilted 24 degrees, marking the start of the spacecraft’s “high-latitude” mission.

These high-latitude observations will allow scientists to see the poles in direct line of sight. The ESA says these observations are critical to understanding the Sun’s complex magnetic polar environment. This may help unravel the mystery of the 11-year cycles of the Sun.

“We are delighted with the quality of the data obtained during our first perihelion,” said Daniel Müller, ESA’s Solar Orbiter Project Scientist. “It’s almost hard to believe that this is just the beginning of the mission. We’ll be very busy.” 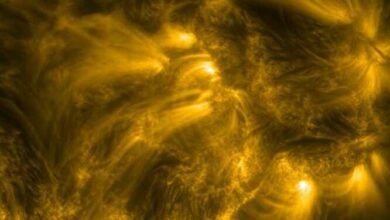