(ORDO NEWS) — The spacecraft did not plan to collect scientific data, but mission experts decided to turn on the four most important devices during a unique collision.

Solar Orbiter was launched on February 10, 2020. Since then, in addition to a brief break due to the coronavirus pandemic, scientists and engineers have conducted a series of tests and settings to put the device into operation on June 15, so that Solar Orbiter will be able to fully function at its first close passage of the Sun in mid-June. But the discovery of a chance encounter with a comet makes it accelerate.

Fortunately, flying through the tail of a comet is a rare event for a space mission. This happened only 6 times for missions that did not specifically pursue comets. All such encounters were found in spacecraft data after the event. The upcoming Solar Orbiter intersection is the first one predicted in advance.

Geraint Jones from the UCL Mullard Space Science Laboratory, UK, who has been investigating such clashes for twenty years, has noticed the meeting. He discovered the first accidental tail crossing in 2000 when he examined the strangeness in data recorded by the Ulysses spaceship studying the Sun in 2001. This study showed that the spacecraft passed through the tail of Comet Hyakutake, also known as the “Great Comet of 1996”. Shortly after the announcement, Ulysses crossed the tail of another comet, and then the third in 2007.

Realizing that in just a few weeks, Solar Orbiter would be 44 million kilometers downstream of C / 2019 Y4 (ATLAS), the scientist immediately warned the ESA team.

Solar Orbiter is equipped with a set of 10 devices for remote monitoring of the Sun and the solar wind – a stream of charged particles that it throws into space. Four instruments are ideal for detecting comet tails because they measure the conditions around the spacecraft and therefore can collect data on dust grains and electrically charged particles emitted by the comet. These emissions create two comet tails: a tail of dust left in the comet’s orbit, and an ion tail directed directly from the Sun.

The ion tail of the comet ATLAS Solar Orbiter will cross May 31 – June 1, and the dust tail – June 6. If the ion tail is sufficiently dense, a magnetometer (MAG) can detect a change in the interplanetary magnetic field due to its interaction with ions in the comet’s tail, and a solar wind analyzer (SWA) can capture some particles of the tail.

When the Solar Orbiter crosses the dust tail, depending on its density (which is extremely difficult to predict), perhaps one or more tiny particles of dust can hit a spaceship at a speed of tens of kilometers per second. This does not pose a serious risk to the spacecraft, and the dust particles themselves will evaporate upon impact, forming tiny clouds of electrically charged gas or plasma, which can be detected by the radio and plasma wave (RPW) analyzer. 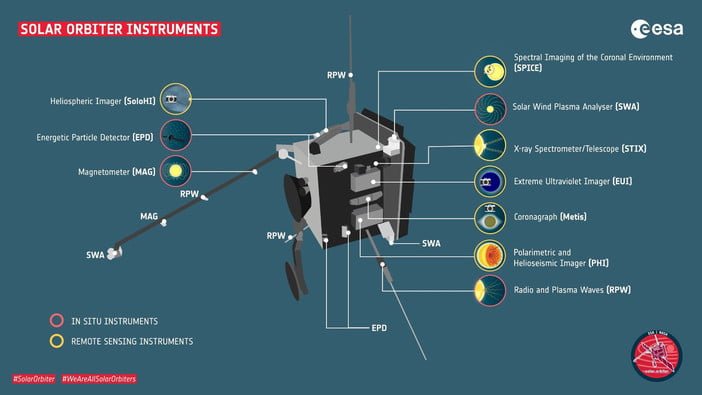 Another problem is the behavior of the comet. Comet ATLAS was discovered on December 28, 2019. Over the next few months, it became very bright and astronomers wondered if it would become visible to the naked eye in May.

In early April, the comet broke up. As a result, its brightness decreased significantly. Further fragmentation in mid-May further reduced the comet, which reduced the likelihood of its detection by Solar Orbiter.

Although the chances of detection are diminished, according to Geraint, efforts are still worth making.

In Texas, a hail of 30 cm in diameter pierced through the roof of a house

In Texas, a hail of 30 cm in diameter pierced through the roof of a house