(ORDO NEWS) — We have all seen great images and videos of coronal loops. These are curved magnetic shapes that cause the brightly glowing plasma to move along its path. They rise above the Sun, sometimes thousands of kilometers, before reconnecting with the Sun.

But a new study says some of the ones we see aren’t loops at all. Instead, they are an optical illusion. How well do we know the Sun, as we think?

The Sun’s corona is the outermost layer of its atmosphere. It consists of plasma, which contains many charged particles. This means that it easily reacts to electromagnetic fields.

The sun has a powerful magnetic field that varies with place and time. Sometimes this magnetism drives the plasma high above the corona, forming bizarre structures called coronal loops that eventually connect to the surface of the Sun. Some of these structures may exist for days or even weeks.

But if the new research is correct, it means that many of the structures that appear to be loops are not loops.

The new study is published in The Astrophysical Journal. Its name is “Coronal Veil”. Anna Malanushenko, a scientist at the National Center for Atmospheric Research, is the lead author.

The study is based on advanced 3D modeling of the solar corona. This allowed scientists to isolate individual coronal loops by cutting the crown into separate sections. The researchers found several loops, but their results showed that many of the ones that looked like loops weren’t loops at all.

“I’ve spent my entire career studying coronal loops,” said lead author Malanushenko. “I was glad that this simulation would give me the opportunity to study them in more detail. I did not even expect this. When I saw the results, my mind exploded. This is a completely new paradigm for understanding the atmosphere of the Sun.”

Coronal loops glow brightly in extreme ultraviolet light due to their temperature. Their shape corresponds to our understanding of magnetism, so the conclusion that these are loops is quite logical. The new study does not completely disprove the existence of loops. But it refutes some of them.

This new study is forcing scientists to take a fresh look at the Sun and its behavior. The authors of the paper are puzzled that the coronal loops do not match what they know about magnetism.

The Sun’s magnetic field lines are strong, but they should still weaken further away from the source. Therefore, if coronal loops are indeed loops that flow along the lines of the Sun’s field, they should diverge further the farther they are from the Sun. But that doesn’t happen. Images of the Sun show that the loops are still thin and bright, even high above the Sun.

“… Coronal loops do not appear to have the expected visual expansion with height, as the confining magnetic field weakens with height on average in the corona,” the authors note in their paper.

So if these are not loops, then what are they?

According to the study, some of these are illusions, which they call “coronal veil”. And their existence makes the authors question what they thought they knew about the Sun. 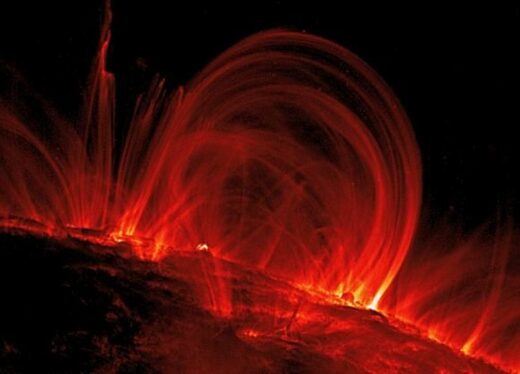 “This study reminds us as scientists that we must always question our assumptions and that sometimes our intuition can work against us,” Malanushenko said.

Some of the loops are what they call projection artifacts. But distinguishing real coronal loops from artifacts is not easy.

“We demonstrate how difficult it is to determine from observations whether a particular loop of a filament corresponds in volume or to a projection artifact. We show how externally isolated loops can deceive observers even when there are observations from several viewing angles,” the authors write.

This study is based on a pioneering simulation developed primarily at NCAR/UCAR. The simulation is called MURaM. MURaM is a realistic simulation that extends from deep within the Sun – about 10,000 km below the surface – to nearly 40,000 km in the corona.

Physical conditions over this wide range vary greatly in pressure and density. MURaM is significant because, before its development, scientists could not model such a wide range of conditions.

MURaM allowed scientists to observe the full life cycle of a solar flare, from the depth of the Sun, the appearance of a flare on the surface, and ending with its explosive ejection into space.

But the main result of this study is the data set created by MURaM. These datasets contain the structure of the magnetic field and the plasma that corresponds to it.

MURaM allows scientists to create “artificial” observations of the Sun, including the corona. The Sun’s corona is optically thin, which means it’s easy to see through. While this may seem like an observational advantage, it is not necessarily the case.

This optical thinness means that structures such as coronal loops can overlap when observing the Sun. And it’s hard to tell which ones are in the foreground and which are in the background. The optical thinness also makes it difficult to determine the thickness of the loops. Are they as thick as a garden hose? Or are they thin, like a ribbon viewed along the edge?

There is a third possibility when observing these loops in an optically thin corona. Instead of a thin filament, the loops may be an optical illusion caused by creases in the sheet of plasma.

MURaM is one of the most powerful solar simulations ever created. It has proven to be reliable in many ways, but researchers are still cautious. In this work, the team compared MURaM data with real images of the Sun taken by the Atmospheric Imaging Assembly (AIA) instrument at NASA’s Solar Dynamics Observatory (SDO).

The strength of MURaM simulations is that researchers can analyze simulation data in ways that are not possible with real observations. MURaM creates data cubes that allow researchers to study regions of the Sun in a way that modern observatories and instruments cannot.

“Since the loops correspond to the field lines, scientists suggest that the loops are projections onto the sky plane of thin tubes of magnetic flux filled with plasma of various temperatures and densities,” the authors write in their article.

“The areas between these flow tubes are also filled with magnetic fields, but the plasma is dimmer because it’s less dense. Or it could be a different temperature that doesn’t show up very well in the wavelength range of the instrument that records it.”

The authors studied volume emission to see these fainter regions between the flow tubes. The thin slices of MURaM allowed the researchers to dissect the data and look for structures and behaviors that are not visible in real images. In these sections, it can be seen that some of the areas that appear to be coronal loops are not loops, but are composed of ridges and wrinkles in the plasma. 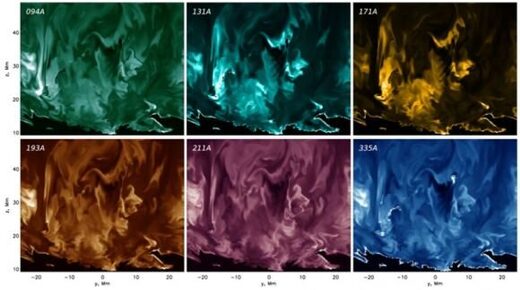 This study raises questions about our understanding of the Sun. But one of the drawbacks of the study is that it is based on a simulation. The authors acknowledge this, as well as the fact that, over time, simulations play an increasingly prominent and significant role in astronomy and astrophysics.

Can we trust MURaM?

The authors note that MURaM is one of the most realistic simulations to date. We know this because it produces many of the things that we can clearly see in the Sun. “However, like any other simulation, it is certainly subject to criticism. Nevertheless, we believe that our results are relevant to the real corona …”, they say.

The surprising thing about this finding is that MURaM is not the only simulation whose results support the findings of this study. 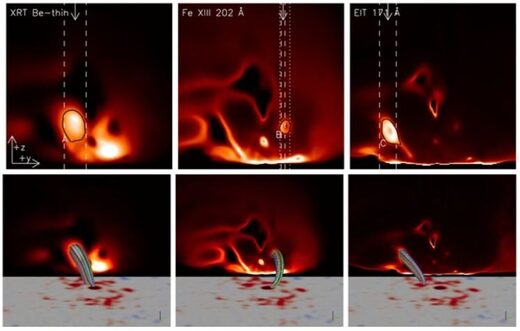 The next logical question is how many of the coronal loops are real loops and how many are not? This question must be answered by new methods of observation, and these methods must be carefully developed.

It will also require new data processing methods. But the answer to this question will lead to a better understanding of the physics of the Sun.

“We know that the development of such methods will be an extremely difficult task, but this study shows that the way we currently interpret observations of the Sun may not be enough to truly understand the physics of our star,” Malanushenko said.

A 2005 study based on different simulations found that the wake of some coronal loops is “…wrinkled and not geometrically simple…”. The authors of the new study argue that this supports their conclusion that some coronal loops are not, in fact, loops.

Another study in 2014 based on CME modeling also found ejections that did not look like loops. Images from this simulation showed a diffuse component, a few isolated spots, and thin, bright, sheet-like structures similar to those shown by MURaM in this new study. The wrinkles in these leaf-like structures formed loops that looked like the projection artifacts found in the new study.